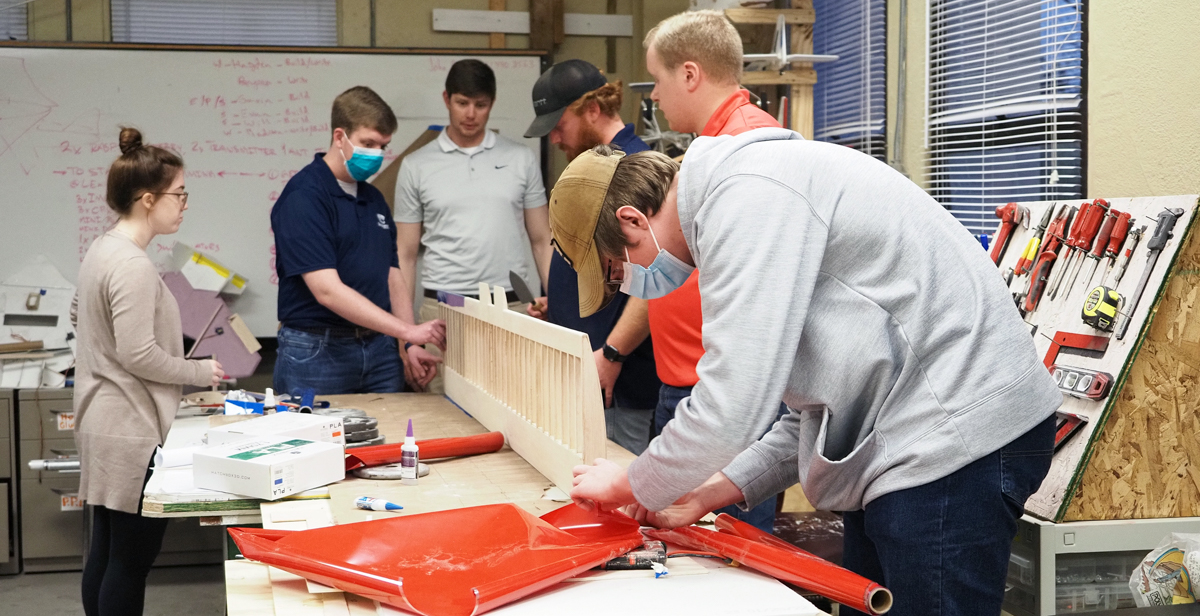 For a half-dozen mechanical engineering students, the Design, Build, Fly competition provides a senior project crossed with a design challenge – one that offers risk, reward and the very real chance that months of work will crash into a runway.

Last semester, they designed a remote-controlled airplane that will fly, land and unload a small cargo package of vaccine syringes, then take off and do it all over again. This semester, they’re fabricating the plane, test-flying it and fine-tuning the payload release system.

In April, the University of South Alabama students will travel to windy Wichita, Kansas, as one of 110 college teams from the United States and around the world.

Their aircraft is built for stability rather than speed. Less flashy, more reliable. Slow and steady fits the mission goal.

“That’s why the wing is massive – 88 inches long, and we’ve overbuilt it” said Evan Moulds, a senior from Mobile with an internship at Continental Aerospace Technologies. “It’s more of a cargo plane than a trickster. We decided the most important thing in the competition this year is to make the plane land slow and smooth.”

In a corner workspace of the Science Lab Building, the engineering students are building a wing out of spruce and balsa wood. The body of the plane will be carbon fiber. Parts of the cargo system are being constructed from a 3D printer.

In weekly meetings, team members share construction duties and deadline issues. They make plans with Dr. Carlos Montalvo, associate professor of mechanical engineering and their faculty adviser. They vote on decisions and share the responsibilities of fundraising and marketing for a $5,000 project.

For now, the South plane has no name, though there has been lighthearted discussion of vaccine delivery systems.

“We should call it the Vax Taxi,” joked Will Sergeant, another senior from Mobile, as everyone laughed.

“Let’s do it,” said Madison Bomeke of Fairhope, who has an internship at Airbus. “I like that – the Vaxi Taxi.”

Rounding out the team are Hayden Jenkins, Bryson Hatcher and Gavin Brown. They are all seniors with a concentration in aerospace engineering. Many of them have internships and other programs that occupy their time.

Brown’s main project at South has a higher orbit. He’s been working on a Jaguar satellite program that is scheduled for launch in May. Components of the satellite have been assembled for final testing.

“We just got it completely put together,” he said.

“I’ve been on that team for two years, and the total project has been going on for six years,” he said. “Design, Build, Fly is more like a senior project, but I want to pitch in and do my part.”

When Montalvo joined the South faculty in 2014, a student asked him to become faculty adviser for a Design, Build, Fly team. That suited the new professor.

“I’m a strong proponent of learning by doing,” he said. “These students, after they graduate, this is what they’ll remember, not their time in the classroom. That’s what our alumni tell me.”

Montalvo is a certified remote-control pilot who flies the South planes in competition. Often it’s a bumpy ride. Failures can be dramatic.

“Lots of crashes,” he said. “When the winds are 40 knots, you see lots of planes flip over and crash. In 2016, we flipped upside down and crashed into a thousand pieces. In 2019, there were no crashes. That was a good year. Those guys were good.”

A longtime adviser for the South flying program is John Hamilton, a remote-control enthusiast who’s been a part-time engineering student for nearly 20 years. He eventually earned his degree in mechanical engineering in 2021. He’s worked on a lot of planes with a lot of students.

“There have been planes that I didn’t think would work that ended up flying very well,” Hamilton said. “You can tell how well a team will do right away. One person can’t do the whole job, so it’s very much a team project.”

Bomeke, a senior from Fairhope, is the only woman on this year’s Design, Build, Fly team. She’s one of 12 female students scheduled to graduate in mechanical engineering this spring. After that, she plans to work for a large aerospace company.

For Design, Build, Fly, the South team thought about using a conveyor belt device to unload packages from its plane. Then students decided that was too complicated, with too many moving parts, and things that could go wrong. Moulds suggested a single motor that simply pushes a box out of a hole in the bottom of the plane, with springs that slide the next package into place.

The design is like a pistol magazine – or a Pez dispenser.

“You know how the Pez dispenser, you move the head and it pushes the Pez out?” Moulds said. “It’s kind of like that.”

Montalvo would love to see the South team make the Top 10 in Wichita this April, but he thinks the experience is more important than the outcome.

“I want them to have fun, I want them to get their hands dirty, but mainly I want to see a plane in the air,” he said. “If they make it into the competition, and they fly, and the plane lands in one piece, that’s a win to me.”