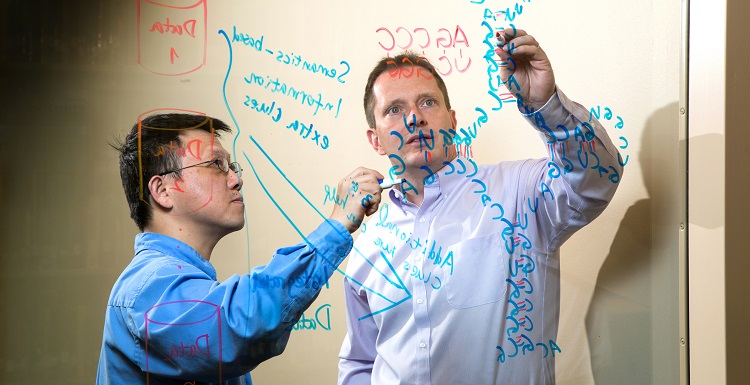 Dr. Jingshan Huang, left, professor of computer sciences, and Dr. Glen Borchert, an assistant professor of pharmacology and biology, are two USA researchers working in the field of informatics. The two have collaborated on projects.

At its core, informatics represents the development of real-world applications for the seemingly infinite amount of information 21st-century technology compiles and computes.

“It’s the ability to ask the questions and then mine the data in a way that returns statistically relevant results,” said Dr. Kimberly Littlefield, USA’s assistant vice president for research communication, development and learning.

“Data is as valuable as platinum now,” she said, calling it the “single best asset” an institution can leverage to provide faculty, the true experts in their fields, information to ask provocative questions and then assemble the results into a consumable form.

“Data is as valuable as platinum."

One USA faculty member on the cutting edge of the field is computer science professor Dr. Jingshan Huang, who said informatics allows researchers to generate a real-world context for raw data in ways that ultimately benefit the population at large.

“The whole point is to combine computer science together with biomedical, biological and clinical investigation,” he said.

Specifically, one of Huang’s ongoing projects focuses on the “innovative application of semantic technologies in microRNA and LncRNA research,” meaning he and his collaborators are exploring exactly how the tiny molecules regulate genes in order to better understand genetic processes. RNA and DNA are the nucleic acids that, along with proteins, drive all cellular activity.

“To explore such regulation is quite challenging,” Huang said, noting each microRNA can target potentially hundreds of genes, while each gene can be regulated by many different microRNAs.

Informatics, he said, has allowed the team to create a user-friendly interface to simplify the search process, so they can focus more acutely on the meaning, or semantics, of the data rather than the data extrapolation, itself.

Ultimately, Huang said the interface could someday be applied to the exploration of next-generation cancer genomics, holding promise for everything from early detection to personalized medicine.

Geneticist Dr. Glen Borchert, an assistant professor of pharmacology and biology at USA, said because the human genome has already been sequenced, the next frontier is using informatics computational resources to analyze RNA to better understand the mechanisms responsible for turning targeted genes on and off.

“I mine these sequences looking for new genes because, frankly, we don’t know all the genes involved. I don’t think we know half of all the genes in play,” he said, adding that sequencing the human genome, though groundbreaking, only showed the scientific community the vastness and complexity of what still remains unknown.

“Trying to define what all the elements of that sequence are and what they do is where we are now, and that analysis could take 50 years,” Borchert said.

From an oncology standpoint, RNA sequencing holds the key to creating targeted therapeutic care, he said.

“All cancer is genetic. All of it. Environmental triggers can initiate a malignancy, but the underlying cause always boils down to genetic code. So the onus is on figuring out the molecular triggers and causes so they can be targeted,” he said. “For the first time, we have the ability to fix genetic disorders, but to fix them we first have to know exactly what’s wrong.”

“All cancer is genetic. Environmental triggers can initiate a malignancy, but the underlying cause always boils down to genetic code. So the onus is on figuring out the molecular triggers and causes so they can be targeted.”

Littlefield notes the momentum surrounding the promise of personalized, or precision, medicine is only one of the myriad benefits made possible by informatics. The ever-expanding computational techniques being developed can, and are, being applied to everything from detailed economic impact analyses to provide return-on-investment information to the development of telecommunication and transportation efficiencies. In both South’s academic and health divisions, there are no fewer than 20 faculty and researchers mining and analyzing data through informatics.

Since the system started in October, the ability to mine the data collected and then conform the patterns that emerge to nationally recognized best practices has been invaluable in helping the region’s only comprehensive academic health care system more effectively execute its mission of helping people lead longer, better lives.

For instance, the integrated electronic health records system incorporates an additional level of safety each time medications are administered. Every physician order is matched with both the drug itself and the patient identification band. Unity automatically flags any order that doesn’t match or conform to best practices.

“From a research perspective, informatics opens entirely new avenues for discovery and collaboration we simply could not have imagined before,” she said, noting that the ability to clearly map patient populations across USA Health’s divisions facilitates cohort identification for clinical trials and holds significant promise for cross-correlation and epidemiological research.

Huang, whose four-year project is slated to conclude in July and is funded by the National Institutes of Health, said access to informatics funding remains a primary hurdle for researchers looking to solve tomorrow’s problems, but the field’s collaborative, multi-disciplinary nature ensures the projects that do receive funding approach their objectives from multiple angles in hopes of impacting broader populations.

“Right now, getting federal and state funding to support research is a big obstacle with maybe 5-7 percent of researchers seeking informatics-related funding actually succeeding. Like all science, though, results get attention, and what we’re starting to see are these collaborative efforts gaining more partners, more disciplines and more schools of thought that ultimately reach and hopefully positively impact more people,” Huang said.

"Results get attention, and what we’re starting to see are these collaborative efforts gaining more partners, more disciplines and more schools of thought that ultimately reach and hopefully positively impact more people.”

Borchert likened the developments spawned by informatics to the leaps-and-bounds advancements in cell phone technology.

“Think of informatics like cell phone memory storage. It gets easier and cheaper with every new version,” he said. “We’re always working. It never stops.”

The next-generation molecule sequencing he’s conducting, for instance, has actually been taking place for about 10 years with the “real strides” being made in the past five.

“The real potential is that there are a lot of diseases science is about to crack wide open. For the first time ever, we’re actually fixing cancer, and we’re doing it in smarter ways.”