Closing Cases by Unearthing the Past 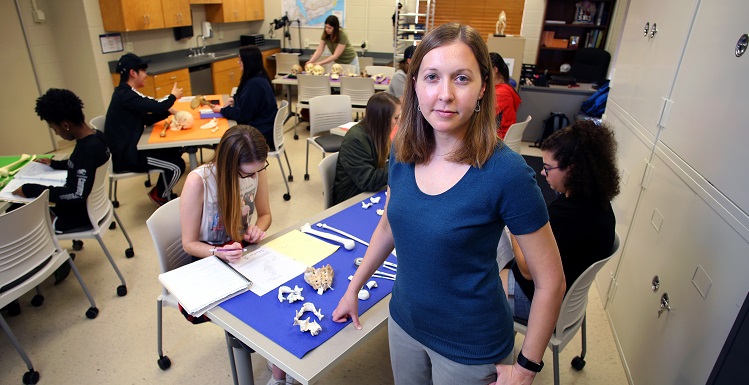 Sign up for discovered@SOUTH and get USA's quarterly publication focused on innovation sent directly to your inbox.

Dr. Lesley Gregoricka never knows when the phone will ring, but every single call from the Mobile Police Department represents an opportunity to provide not only a community service but invaluable field experience for her most promising forensic anthropology students.

Gregoricka, a bioarchaeologist and assistant professor of anthropology in the University of South Alabama’s department of sociology, anthropology and social work, serves as co-director of the USA Forensic Science Program. A few months after joining USA in the fall of 2012, she also began offering her expertise pro bono to the Mobile Police Department’s Identification Unit when skeletal remains are discovered. When needed, she also helps other law enforcement agencies in South Alabama.

Lt. Joseph Rose, who leads the Mobile unit, said the infrequent discovery of remains by local residents – often while digging in their own backyards or performing renovations – is aided tremendously by Gregoricka’s specialized skill set, accessibility and enthusiasm.

“It’s always good to have an outside perspective on things, but what’s great about Lesley is how she likes to explain things to us as we’re going through the process. We always learn something working with her, and her enthusiasm is actually quite contagious,” Rose said. “It’s not just that she shares her time and her expertise. It’s her physical help – being there on the ground – that is so appreciated.”

“It’s not just that she shares her time and her expertise. It’s her physical help – being there on the ground – that is so appreciated.”

Earning her bachelor’s degree from the University of Notre Dame and both her master’s and doctoral degrees from The Ohio State University, Gregoricka’s academic research utilizes chemical techniques to examine changing patterns of human mobility, funerary practices, diet and social complexity in the Near East and Arabia.

Since last year, Gregoricka has been directing a long-term anthropological study on ancient bones from the Persian Gulf, after she and two of her students traveled to the United Arab Emirates.

Her volunteer work with local police not only helps keep her fieldwork skills polished but affords some of her brightest students hands-on, experiential learning unattainable in a classroom or lab setting.

“The students get so excited, and we are not usually talking about ideal conditions. They’re outdoors sometimes for 12 hours working in the elements, and it is hard work. But they take it in stride, do exactly what’s expected of them in a professional and courteous manner, and I never get tired of seeing their passion for this work play out,” Gregoricka said.

Natalie Smith, an anthropology major, accompanied Gregoricka last year as a junior to a recovery scene in Baldwin County. The semester earlier, Smith had completed a class focused on the human skeleton.

“I was able to use the skills I gained in that class to help identify possible bone fragments at the scene,” she said. “The majority of the potential fragments were small pieces of rock and wood that the officers found while screening through dirt. It's amazing how much non-bone can look like bone when you aren't proficient in bone identification.”

The case was a homicide investigation, and Smith arrived and dressed out in a protective suit, boots and gloves at about 2:30 p.m. She was on the scene seven hours, and left only because she had a class in the morning.

“The experience really cemented in my mind what I am meant to do,” said Smith, who plans to attend graduate school and eventually earn a doctorate in anthropology with a focus on forensics. “There was a sort of satisfaction I had knowing that I was helping family members know what had happened. It can help with closure and, of course, justice.”

“There was a sort of satisfaction I had knowing that I was helping family members know what had happened. It can help with closure and, of course, justice.”

While Gregoricka only gets called out to an excavation a few times per year – usually when civilians come across bones in the woods, storm damage exposes remains or even a crawl space excursion takes an unexpected turn – she said every incident provides a learning opportunity.

“In most cases, we’re not dealing with burials at all. Nine times out of 10 the remains are animal bones, but these digs highlight the role forensic anthropologists play, and it’s the quickest way for law enforcement to determine if the find is of any forensic significance,” she said.

Specifically, Gregoricka said forensic recovery scenes requiring excavation are typically secured by police personnel when she and two or three students arrive, and they begin by removing vegetation and setting up a grid over the burial site to facilitate accurate mapping. Large branches and logs are never removed in case the police determine they play a camouflage role. Positioning of the remains is documented “because they can tell us sometimes how the body was deposited.”

Lifted remains are then labeled and bagged so they can be more easily reconstructed, all of which can provide officers with preliminary findings regarding the sex, age, stature and ancestry of the deceased.

“Every case is something completely new and has its own unique challenges,” Gregoricka said, noting the students selected to participate in the excavations are pulled from a call-out list and have typically completed either – but preferably both – her forensic anthropology course and the higher level Human Osteology in Archaeology and Forensic Science course.

Of course, current students are not the only future forensic professionals Gregoricka targets with her outreach. In an attempt to instill curiosity and confidence in younger girls considering careers in science, she also leads one of two Girls Exploring Math and Science workshops held annually at South. The first workshop simulates an excavation using plastic skeletons buried on campus, while the second explores forensic anthropology in a lab setting and teaches participants how to develop a biological profile. They then cross-reference their findings with a fake “missing persons” catalogue and attempt to make an identification.

Exhuming plastic skeletons is certainly easier than working a crime scene, but both are the result of a passion Gregoricka has held since she was a young child herself.

“I had wanted to be an archaeologist since I was a kid and never grew out of it,” she said. “I was always excited to learn about the past and was particularly fascinated by what bones can tell us about the lives of ancient peoples. I feel that it’s so important for young girls to have good role models in this field, and for our students to get hands-on experience, so they can see working in science can be a real and rewarding career.” 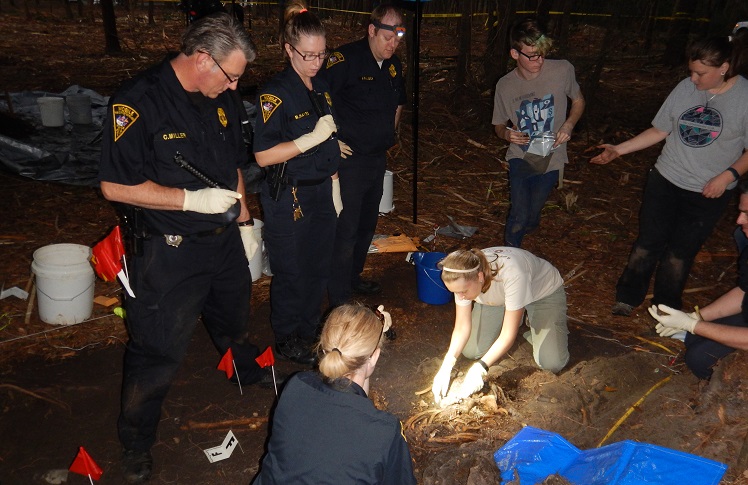