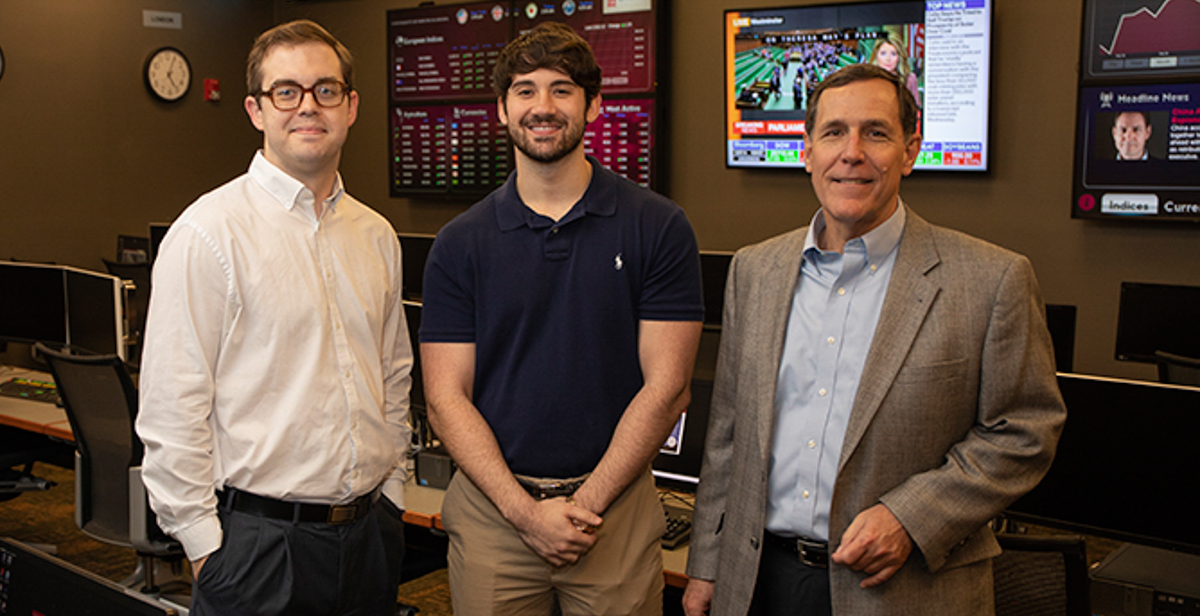 Jacob Corbett, left, and Taylor Shepherd, center, were two of six Mitchell College of Business students on a team that won the 2018 University Portfolio Challenge. Dr. Reid Cummings, director of USA’s Center for Real Estate and Economic Development, and the team’s mentor, right, taught the Finance 446 class each of the students took.

A team of six real estate students in the University of South Alabama’s Mitchell College of Business beat out teams from 47 competing universities to win the grand prize in the 2018 University Portfolio Challenge.

Their $40,000 prize money will be matched by Mobile philanthropist Abraham “Abe” Mitchell through the Mitchell-Moulton Scholarship Initiative for a total of $80,000 in scholarships for students pursuing the real estate concentration in the business school.

"I'm extremely pleased and proud of these students,” Mitchell said. “The Mitchell College team consistently outperformed other teams from outstanding universities. I'm even more pleased that the funds will be invested in scholarships that will help students for years to come. With the Mitchell-Moulton Scholarship Initiative match, the number and amount of scholarships is doubled, benefitting even more students."

The competition, which draws some of the most prestigious universities in the nation and around the world, challenges each team to theoretically invest $1 billion among a variety of commercial real estate investment trust, or REIT, opportunities. Students first evaluated potential investments in both equity and mortgage REITs and then chose how much money to allocate to either the public or private sectors. Finally, they allocated their investments among industry types, such as office, retail, apartments, hotels, and so forth, and geographic regions of the country.  The performance of each team’s weighted investment selections were calculated with their respective benchmark return data provided by leading industry sources. The competition is sponsored by Altus, a Canadian real estate company.

All of the team’s members were in Finance 446, which was taught by Dr. Reid Cummings, director of USA’s Center for Real Estate and Economic Development, and the team’s mentor. They began their project in late November 2017.

“I’m pretty excited about what these students achieved. I was definitely amazed at their success and proud of their efforts,” Cummings said.

He presented several possibilities to the team, including information about investments that focused on the growth in purchasing and leasing industrial warehouse space.

“Amazon has built a sophisticated distribution system from the ground up, and other companies now find themselves playing catch-up. They do not have the time to develop and build brand new facilities and instead are turning to existing warehouse space to build out their distribution networks. Plus, the legalization of medical marijuana is causing a rise in the need for warehouse space across the country because those growers must have a controlled environment,” Cummings explained. After studying the data and analyzing the trends, the students finally agreed to invest in the industrial sector, allocating $750 million to private equity and $250 million to public equity.

“Our overall return was 16.12 percent, which would have equaled $161.2 million on $1 billion invested. The closest team to us was the second-place team at 13.35 percent. In other words, we made $27.7 million more than the second-place team. The last-place team lost $202.25 million for the year, which is a difference between first and last of $363.37 million,” Cummings said.

Team captain Jacob Corbett said, “We did pretty good, and I was surprised. We won each of the quarterly prizes and the overall grand prize.

“We spent many hours reviewing our research data, then we took the team’s input and made a decision on how to allocate that billion dollars. We had to make all the investments at one time, and we couldn’t touch it again until the year was up. There was no manipulating our numbers once they were submitted,” Corbett said. “We put 75 percent of the money in the private sector and 25 percent in the public sector. If we had put 100 percent in the private sector, we would have done even better, but we wanted to diversify in the beginning.”

Corbett and three other team members – Daniel Mann, Dallas Russell and Andrew Roux – have graduated. Fellow teammates Taylor Shepherd and Auston Fillinger is scheduled to graduate in the near future.