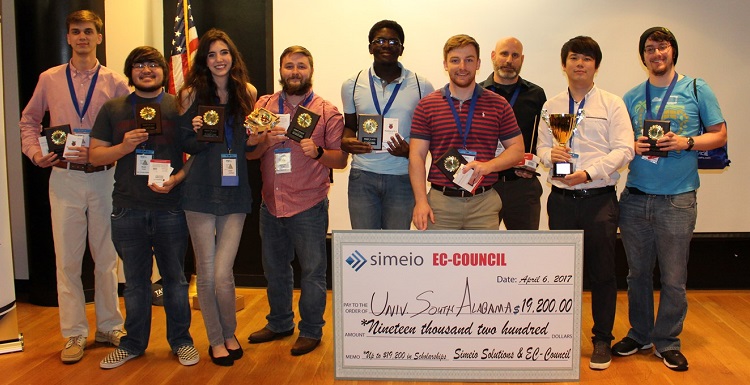 The USA team beat out seven other finalist teams from an original group of 33 universities and colleges to compete in the National Collegiate Cyber Defense Competition in San Antonio, Texas, April 13-15. The defeated teams included the University of Central Florida, which won the last four regional competitions and the national competition the last three years. UCF placed second behind South, and the University of Florida came in third.

At the national competition, South will compete against nine other regional champions.

Each of the team members received a plaque, a Raspberry PI Model 3 and an all-expenses paid invitation to the national competition. USA and DayZero also received a team trophy, a $500 check from Palo Alto and $19,200 in training courses from EC-Council (partnered with Simeio Solutions).

The team’s advisers are Drs. Todd McDonald and Todd Andel, professors of computer science in the University’s School of Computing.

DayZero is a USA student organization dedicated to furthering cybersecurity knowledge and skills through participation in regional, national and international cyber competitions and capturing the flag events.