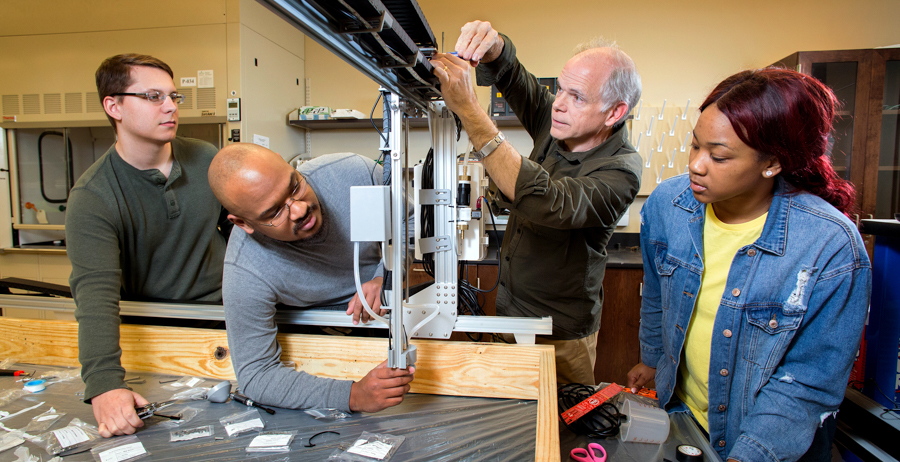 “That’s one small step for a man, one giant leap for mankind.”

Fifty years ago, astronaut Neil Armstrong’s remarks galvanized the entire world as he became the first person to walk on the moon. Fifty years later, the moon is again beckoning, but this time not as a final destination but as a launch point for something bigger.

“The United States will soon be able to launch people into space again,” said Dr. Samuel Russ, associate professor of electrical and computer engineering at the University of South Alabama. “It is in the nature of people to want to go farther and to explore, and I am excited that we, both in the U.S. and around the world, are continuing to do this.”

“It is in the nature of people to want to go farther and to explore.”

To that end, NASA and the National Space Grant Foundation selected ten university teams from across the country to design systems, concepts and technologies to potentially support NASA’s deep space exploration capabilities, including an orbital lunar outpost serving as a “gateway” to deep space. And one of those ten universities is the University of South Alabama.

“South has a College of Engineering that offers degree programs that are competitive with any similar degree programs in the country,” said Dr. Grant Glover, associate professor of chemical and biomolecular engineering at USA. “In particular, it is important to note that this is an undergraduate project, and in my opinion, I think it is rare to find such a unique opportunity at any engineering school.”

Glover, Russ and their undergraduate students are working on two separate projects for NASA.  Russ's project focuses on automation and power management of an unmanned biological laboratory for the gateway, with a special interest in energy-efficient computing and software design. The lab would function with minimal support from a crew or mission control on Earth.

“Our students are building a robotic station that will grow plants and provide lighting, nutrients and water,” Russ explained. “The robot will plant, monitor and harvest the plants and send back status reports, and the automated system will control the lighting, water and nutrients. They are building a complete system to do this from scratch, including constructing the robot, the plant-growing pods and the control system.

“In other words,” Russ continued, “we want to develop a station that can run unmanned for years and grow crops in space.”

In Glover's project, students are evaluating two custom-synthesized ionic liquid solutions for capturing carbon dioxide in a closed-air revitalization system. Since most of the air for astronauts is recycled within their spacecraft or habitat, a key part of this process is the removal of exhaled carbon dioxide.

“Besides being able to say they developed equipment for a NASA space station, they are learning to do actual engineering,” Russ said. “This project is every bit as complex as a project they will encounter after they graduate, and this gives them a chance to see how engineering is done.” The project also exposes the students to some of the latest technology, including robotic agriculture and 3D printing.

“This project is every bit as complex as a project they will encounter after they graduate, and this gives them a chance to see how engineering is done.”

They have until the end of the spring semester to work on the projects, and then comes their research presentation to NASA. Glover said the space agency utilizes a systems engineering approach to build and develop projects.

“In that regard this project is the same as any other NASA project with periodic program reviews, technical reviews and discussions,” Glover said. “NASA subject matter experts evaluate the progress of the project and review the results as prepared in a final report. All the presentations to NASA are completed by students.” Russ said they videoconference regularly with NASA, but the final presentation planned for May will hopefully take place in person at the Kennedy Space Center in Florida.

South and the other nine universities are part of the eXploration Systems and Habitation (or, X-Hab for short) 2019 Academic Innovation Challenge. The X-Hab initiative supports NASA’s research efforts to study sustained and affordable human and robotic space exploration while helping to develop the highly skilled scientific, engineering and technical workforce of the future.

“If our work with NASA helps motivate students to be interested in space exploration, even if they later work outside the field of engineering, then I think the work is rewarding,” Glover said.

“Universities should be places where innovation occurs,” added Russ, “and I am proud that South Alabama is helping to innovate human exploration.”