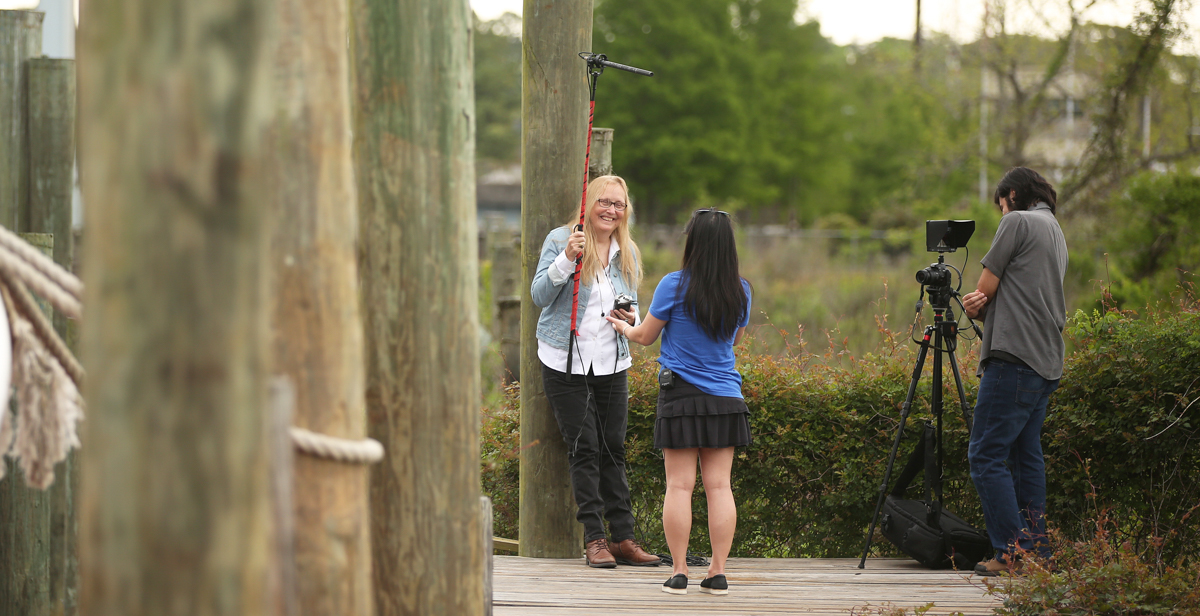 Dr. Lorraine Ahearn, an assistant professor of multimedia journalism at the University of South Alabama, holds a boom microphone for her interview with Hang Nguyen, who moved to Bayou La Batre from Vietnam as a child. Ahearn is producing a documentary about the Vietnamese fishing community on the Alabama Gulf Coast. The videographer on many of her interviews is Francisco Cordova, right, a December graduate from the digital cinema and television program.

Chris Phengsisomboun grew up in the Vietnamese fishing community of Bayou La Batre, where the families of war refugees worked and sacrificed to build better lives for their children.

He remembers his grandparents coming home reeking of shrimp from the packing house. He remembers the community reeling from Hurricane Katrina in 2005 and the Deepwater Horizon oil spill in 2010. He remembers his family feeling so proud when he became the first Asian-American valedictorian at Alma Bryant High School.

“That was pretty emotional,” said Phengsisomboun. “When I graduated from high school, I was the only member of the family who’d made it to that point, so everybody was ugly crying. It was intense.”

At the University of South Alabama, where he earned a communications degree in 2019, Phengsisomboun juggled schoolwork, side projects and internships. The day after graduation, he moved to Nashville to start work at the Recording Academy, which produces the Grammy Awards.

“He was the kind of student who takes advantage of every possible opportunity,” said Dr. Lorraine Ahearn, an assistant professor of multimedia journalism in the department of communication. “Anytime I saw him in the hallway, he was on the phone, working, or going into meetings. He was a man with a plan.” 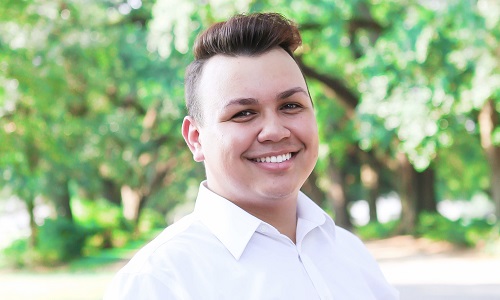 Chris Phengsisomboun, who grew up in Bayou La Batre and graduated from the University of South Alabama, now works at the Recording Academy.

Phengsisomboun will appear in a 30-minute documentary Ahearn is doing about the fishing community. The working title is “Safe Harbor: The Vietnamese Fishermen of Bayou La Batre.” The project also features David Dai, the first Vietnamese-American teacher at Alma Bryant, who was named Mobile County’s 2020 Teacher of the Year.

There will be interviews with older members of the community, too. After 1975, many of them fled the coastline of Vietnam, arrived in America, then found their way to an Alabama fishing community along the Gulf of Mexico.

“I think it’s very powerful that boats saved them, some of them, and then ended up sustaining them in a new place,” Ahearn said. “It’s a powerful metaphor, almost biblical.”

She began work on the Bayou La Batre project with Andrew Hongo, an assistant professor of broadcast journalism who moved to California but is still co-producing the documentary. Graduate students in the department are doing historical research and pulling together archival material from the Mobile Historical Society and the Doy Leale McCall Rare Book and Manuscript Library at South. She received a $1,500 grant from the University's Office of Research and Economic Development to pay for interpreters, travel and the rights to historical photos and newsreel footage.

One of the challenges for Ahearn is building trust and encouraging candor during interviews. Many Vietnamese faced hardship and prejudice, especially when they first came to this country, but that painful subject wasn’t always shared with their children.

“People don’t talk about it much,” she said. “It’s difficult for some older people to go back and tell it in detail. There are stages people go through — social stages, educational stages, economic stages — but it’s harder to get into the psychological and emotional part of that.”

Bayou La Batre, “the Seafood Capital of Alabama,” is 20 miles south of Mobile. It’s a small city of about 2,500 people. More than 20 percent of the population is Asian-American.

Phengsisomboun (pronounced “feng-siss-om-bon”) remembers his family celebrating the Laotian New Year at a Buddhist temple and the Blessing of the Fleet at a Catholic church.

He was a multiracial child in a melting pot community.

His father’s family are Asians from Laos and Thailand — they own the Taste of Thai restaurant — while his mother is a white woman from Mobile. After his parents divorced, his mother married a Vietnamese man, giving him an extended multiracial family along the Gulf Coast.

At South, he skipped many extracurricular activities to focus on a career after college. He landed a show business internship that turned into a full-time job in Nashville.

As a boy, he was embarrassed about having a long last name that people struggled to pronounce. Now he’s thrilled to have nationwide audiences read his name in the credits for Grammy productions.

Phengsisomboun is only 25 years old, but time on his own has given him some perspective. He thinks he’s just starting to appreciate the sacrifices that were made for him. He’s just beginning to understand his immigrant experience.

“You’re fed a particular idea of what the American Dream looks like, with all the prosperity, and having the opportunity to become a businessman or woman,” he said. “There was a sense that if I didn’t do something greater with my life, I’d be letting them down, and ultimately disrespecting them — and respect is just a huge, huge, huge part of the family.”

Before Ahearn became a communications professor, she was a reporter and columnist for the News & Record in Greensboro, North Carolina.

One big story was the 5,000 Montagnard refugees who left the highlands of Vietnam and were resettled in Greensboro.

“There would be entire apartment complexes in our city that were entirely Montagnard,” she said. “It was very interesting, a very noticeable presence. Every time I would write about them, we’d get these nasty, angry letters from some people. There were other people who understood that we had been allies, we were on the same side, and that Montagnards had saved many American lives.”

Ahearn marvels at the way immigrant communities seek out the landscapes and livelihoods they know. Mountain farmers head for the hills, while fishing families cling to the coast.

When she joined the faculty at South in 2019, she began meeting students from Bayou La Batre.

“One class after another had these Vietnamese and Cambodian students,” she said. “I started to delve into their stories a little bit and that’s how I learned about the seafood industry, and took some trips down there. It’s so localized to the Gulf Coast, and it’s so much about the Gulf, but it’s also a uniquely Southeast Asian story of refugees recreating their lives and becoming successful enough to put their kids through college.”

The “Safe Harbor” documentary should be finished by the end of this year. The coronavirus pandemic has slowed production, but Ahearn is still doing interviews. There’s always more to hear and something to learn.

“Hearing these migration stories is fascinating,” she said. “The people who fled South Vietnam, they lost everything when they came here. We see it as a story of resilience and determination, but it’s also a story of great loss. There’s this shadow of the past that stays with them.”