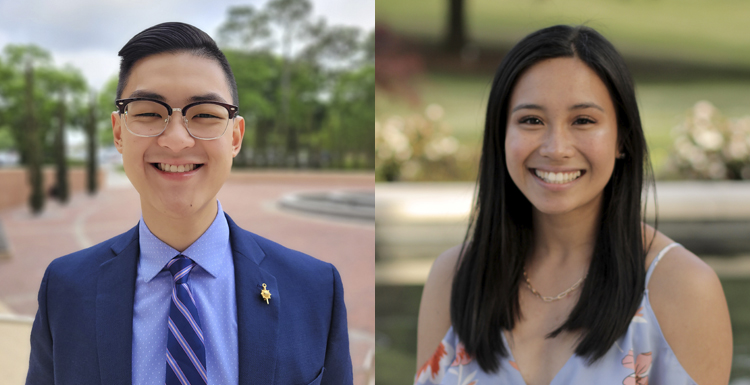 Noel Godang, left, and Ivy Nguyen have been named Goldwater Scholars for 2022. The national science, technology. engineering and math scholarship program emphasizes research and a desire to pursue an academic or industry research career.

Two University of South Alabama undergraduate students have been named 2022 Goldwater Scholars, a prestigious national science, technology, engineering and math scholarship program that emphasizes research and a desire to pursue an academic or industry research career.

Ivy Nguyen and Noel Godang, both juniors majoring in biomedical sciences, are this year’s recipients.

“My jaw dropped, and I think I let out a squeal of excitement,” Nguyen said. “Initially, I was in disbelief, but once that feeling wore off, I was just extremely happy that all of the work that I had put in through research and through the application process had paid off.”

Nguyen found out while in her chemistry lab; Godang was in the gym when Nguyen called and told him to check the results.

“I immediately ran out of the gym faster than I was running at the gym,” he said. “I called all my friends and family and then went to thank my research mentor and all the faculty members who helped me throughout the process. I was extremely honored and humbled to be a recipient through great support from the University.”

Since his freshman year, Godang has been researching with his mentor Dr. Glen Borchert in the USA College of Medicine on noncoding RNAs and their roles in oncogenesis.

“He'll clearly be going to med school,” said Borchert, associate professor of pharmacology and biology. “The only question is whether I'll be able to convince him to pursue an M.D./Ph.D. Noel has the makings of an exceptional medical researcher.”

“In the future, I want to create and study alternative curative agents for irremediable illnesses and use that research to improve the lives of my own patients as a practicing physician,” she said.

Forbes is her mentor and saw success in her future almost immediately.

“It does not take long at all to connect the dots that Ivy is exceptional on all fronts at all levels,” said Forbes, a professor of chemistry.  “She truly understands that there is no satisfactory substitute for excellence, and she embraces absolute integrity in everything.”

Universities are allowed to only nominate four students — five, if one is a transfer — each year to the national level. Once a student has been nominated to the national committee, candidates are grouped into their STEM fields and winners are selected.

About 25 percent of those nominated to the national competition receive a Goldwater Scholarship. Winners receive $7,500 per year for their remaining time as undergraduates to help cover the cost of tuition, fees, books and room and board.