The Waterman Globe Makes Its Return 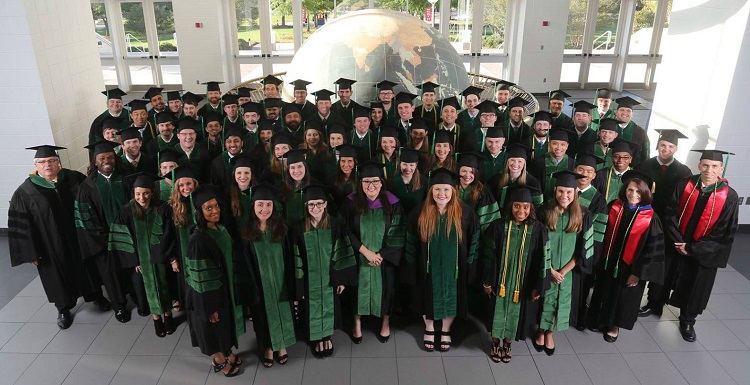 The Waterman Globe, after being removed from public view since 2015, was on display this year for Commencement activities, including the College of Medicine's convocation ceremony. Bottom photo: In January 1996, Mac McCormick was nearing completion of the Waterman Globe restoration before it was first placed in the Mitchell Center. Photo courtesy of The Doy Leale McCall Rare Book and Manuscript Library.

The Waterman Globe, one of Mobile’s best-known artifacts, the focal point of the Mitchell Center’s main lobby and the traditional backdrop for thousands of new graduate portraits, returned for Spring Commencement on Saturday, May 6.

The globe had been draped off since November 2015, when the metal shaft that held the 12-foot-tall sphere on its tilted axis broke after 26 years. Decades older than the University, the globe is part of Mobile’s role in a worldwide shipping industry that exploded at the beginning of the 20th century. How the globe found a home in the Mitchell Center is a symbol of the University’s commitment to honoring local history. Despite the damages from its fall, there was never a question of whether or not to repair it. There was only the determination to repair it the right way.

“The globe was suspended out at a cantilevered position by the shaft, and it broke because of metal fatigue,” said Randy Moon, associate vice president for facilities management. “A side of the globe was damaged, and the globe damaged the building where it fell.”

The repairs involved numerous members of Moon’s division, along with engineers, a metallurgist and a faculty member in the University’s department of visual arts. A specially designed lifting mechanism was needed to lift the globe  without crushing it, and then keep it suspended above the floor during repairs. Sheet metal on one side of the globe had to be replaced. A totally new metal shaft was fabricated. And, once the globe was back in place, the damaged portions of the 1950s world it depicts were painstakingly repainted to perfection.

“We put a lot of engineering and thought into it, and this project became very detailed because we wanted the repairs to last a long time,” Moon said.

Cynthia Rush, a graduate student in English, is likely the most knowledgeable person on campus about the globe’s history. She has researched the globe’s beginnings through interviews with Melissa Inge, the granddaughter of John B. Waterman, founder of the highly successful Waterman Steamship Corp., and the daughter of Carrol B. Waterman, vice president of the company. It was Carrol Waterman’s idea to commission Rand McNally to build the globe for the lobby of the Waterman Building, the historic headquarters of the company in downtown Mobile. 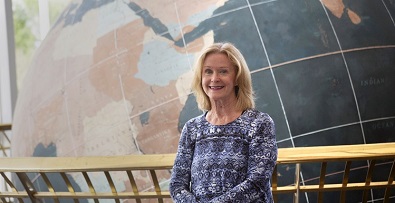 “Her father really cared about art and history,” Rush said, describing the globe’s original placement surrounded by murals. “There were only three of those globes ever commissioned, and it was a very valuable object, especially during those times.” One of the globes was inside the lobby of the New York Daily News and the other was at the Iowa Chronicle.

The two-story main lobby of the building on St. Joseph St. was opened in 1950 with a public invitation for visitors. To a population that knew television only as a new-fangled invention, the Waterman Globe, surrounded by the same brass railing that remains with it today, was the hottest ticket in town. During the two-day grand opening, thousands of Mobilians saw the globe and the murals for the first time with people often waiting in line for blocks. The building was kept open until 9 p.m. both evenings to accommodate the crowds.

Rush, who was so taken with the globe’s history that she presented her research in a public presentation and tour of the globe several years ago, called the globe’s restoration “another amazing part of its story.”

“This globe is an amazing link to a local company that was once the leading steamship company in the world,” Rush said. “Then, it ended up at the University of South Alabama in pieces and was kept that way in storage for years.”

When the Waterman Building was sold in 1973, the globe was dismantled. However, USA founding president Dr. Frederick Whiddon brought the pieces to USA, hoping to use it at the right time in the right place, which turned out to be the new Mitchell Center when it opened in 1998.

The globe was reassembled over two years by employee Lanny “Mac” McCormick, who was the engineering lab technician. For details of that story, Rush located McCormick’s widow and other family members.

“Now, that’s a story,” Rush said of her talks with them. “McCormick put the globe back together all by himself, squeezing that difficult work in between all his other engineering duties at USA. He had seen the globe originally as a child when it was in the Waterman lobby, and he drew from his personal memory during the reassembly.”

McCormick fabricated the metal shaft himself. The original sheet metal had 5,500 rivets at one-inch intervals. If he had made even one tiny miscalculation on the metal braces inside the globe’s interior, its exterior wouldn’t have fit together.

“In the end, he put the world back together for a purpose,” Rush said. “Now, with the new repairs, the globe will continue to fascinate campus visitors for years to come.” 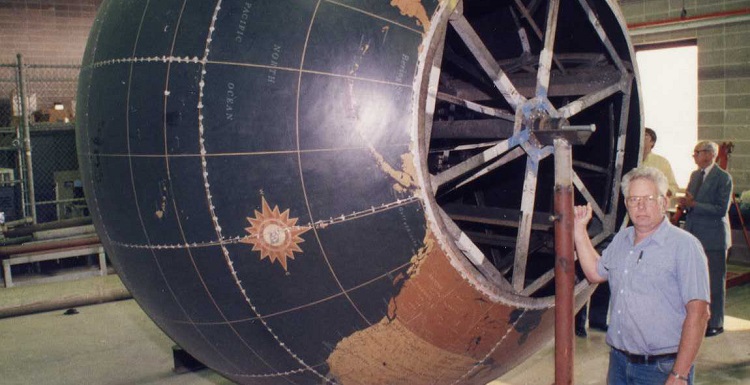