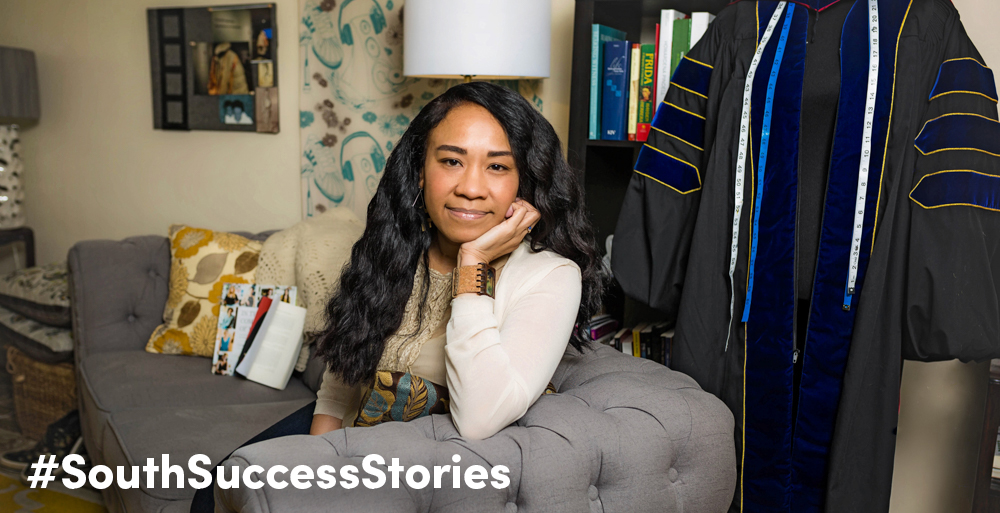 One of Dr. Gloria Wilson's works is her “Blackademic Project,” an ongoing examination of the intersections of race and academic identity. She designed and constructed a doctoral robe to serve as a metaphor to describe the challenges of negotiating a racialized academic identity.

Dr. Gloria Wilson, an educator, artist, and researcher, remembers finding a safe space to be creative when she was introduced to painting by James Kennedy, who is now a professor emeritus of art and art history at the University of South Alabama.

“I was lucky to come to South on a full tuition scholarship,” she said. “Mr. Kennedy deeply influenced how I was able to find myself in the world of art. As a student of color, sometimes I found it challenging to navigate and have support. He was patient and supportive of my art making. The notion there was someone who looked like he could be a 'family' member and who gave encouragement made me feel comfortable, and I was able to excel in his classroom.”

Wilson, who has taught seventh through 12th grade art, was also influenced by Dr. Turner Rogers, retired associate professor in education at South.

“Dr. Rogers and I still communicate regularly,” Wilson noted. “He helped me see how art education could be meaningful in the lives of my students. He continues to serve as a mentor.” Wilson also credits Tony Wright, assistant professor, for his mentorship in ceramics and for his letter of support in her application for graduate study leading to a Ph.D.

“My dad is from Mobile, and made a career in the Air Force.  We lived all over the country, which was exciting for me,” Wilson explained. “We also lived in the Philippines, which is where my mom is from. When my father retired, he moved our family back to Mobile. I attended and graduated from Davidson High School.”

Wilson says she gets her inspiration for creativity directly from her parents and family. While Wilson was growing up, she was inspired by her father’s carpentry, and her mom’s sewing and crocheting techniques. She would also find inspiration from her Filipino uncles who were tailors.

“While working on my Ph.D., I took a class in printmaking for textiles,” Wilson said. “This was something I had not been able to do before. This opened new avenues for creating. Most recently, I was able to return to my passion, to use printmaking techniques on fabric and to manipulate textiles as an aesthetic response to my lived experiences.”

Wilson has connected with Dr. Joel Lewis-Billingsley, associate professor in education at South, who is working on the Africatown film project, which will include a documentary titled “110: The Last Enslaved Africans Brought to America.” This project will also include an oral history, K-12 curriculum, book of poetry and an art exhibit that Wilson will create to honor the memory of Africatown’s 110 enslaved survivors of the slave ship Clotilda.

“She and I went to the same high school, and also connected through familial ties,” Wilson explained. “Because we have these deeper connections, I didn’t hesitate to join Joel and the team of faculty to create an art exhibit, which is intended to travel with the entire 110 project. When I reflected on the story of the enslaved Africans on the Clotilda, the first word that came to mind is ‘captured.’ I use the enduring idea of ‘capture’ to honor the legacy of the women, men and children who endured this unthinkable journey.”

Lewis-Billingsley is excited to have Wilson join the team and create something memorable to accompany the film and complement the experience of honoring the Africans brought here on the Clotilda.

“For years, I have looked for an opportunity to work with Dr. Wilson because of her passion for the arts and love for education,” she said. “We wanted someone who was a native Mobilian and an accomplished artist. With the art and education components of Project 110, her art education expertise encompasses our desire to reach others through art and educate students on this important history.”

Dr. Andrea Kent, dean of the College of Education and Professional Studies at South, is pleased Wilson’s work will be featured in Mobile.

“Dr. Wilson is certainly blazing a trail and ‘impacting many lives,” Kent said. “I am always amazed with the exceptional things our alumni are engaged in, and she is no exception. We are very proud of the work she is doing.”

Wilson has also worked on another project. Her “Blackademic Project” is an ongoing examination of the intersections of race and academic identity. She has personally designed and constructed a doctoral robe to serve as a metaphor to describe the challenges of negotiating a racialized academic identity. Inline with her work in critical arts-based research, this robe has been exhibited in university galleries in the Southeast and the Mideast.

“This research project was inspired by my mixed-race experiences and also by Kerry Ann Rockquemore’s book, ‘The Black Academic’s Guide to Winning Tenure - Without Losing Your Soul.’ This book was given to me after I accepted my first tenure-track position in higher education. I wanted to complicate the conversation about what it means to be mixed-race while also navigating the hyper-surveillance of tenure structures.”

It took Wilson six months to complete the robe and it was a labor-intensive process for her. She hopes to expand the project to include stories of other scholars of color.

“I told my students, as artists, we create to give a voice to the submerged narratives,” she said. “On my doctoral robe, I have words such as Blackademic, tenure track and dissertation. My project includes a published paper in ‘Visual Inquiry: Learning & Teaching Art.’ The project took me about three years to conceptualize and write.”

In August, Wilson will start a new faculty position at the University of Arizona as assistant professor of Art & Visual Culture Education. Wilson has presented her research nationally and internationally highlighting the intersections of racial identity, arts participation and equity in arts education. She serves on editorial review boards for the Art Education Journal and The Journal of Social Theory in Art Education.