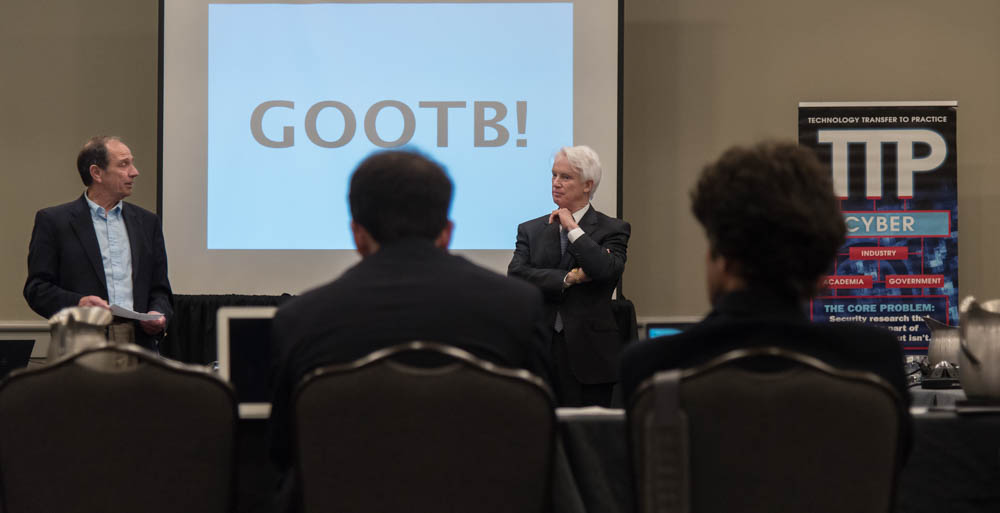 Dr. Alec Yasinsac, left, dean of South’s School of Computing, and Michael Chambers, USA assistant vice president for research innovation, lead a spring workshop in Birmingham as part of South's grant to advance research to real-world applications. Part of Chambers' advice to researchers: “Get out of the building” and talk to customers.

Research takes time, and that can be a problem when it comes to turning technology into practice.

Academics conducting the research often lack the ability or incentive to get products to the marketplace. That’s another problem.

And Congress, which controls spending, including the $80 million a year the National Science Foundation budgets for security and privacy research, wants more of the results of research put into everyday use.

Enter a team from the University of South Alabama, which has spent nearly two years speaking to cybersecurity academics around the country in a push to bring innovation out of the labs and to real-world applications for consumers, academia and government.

Its task: Solve the problems.

“Research traditionally takes long periods of time before the best outcomes manifest,” said Dr. Alec Yasinsac, dean of South’s School of Computing. “So NSF has been under some pressure to show more positive outcomes.”

Anita Nikolich, a former NSF program officer in cybersecurity, said “a lot of security and privacy research gets published but the results never get put into real-world situations.”

Nikolich, who was instrumental in South getting a two-year, $250,000 grant to advance some of that research, said the “force of personality” between Yasinsac; Michael Chambers, USA assistant vice president for research innovation; and the late Becky Bace, chief strategist for USA’s Center for Forensics, Information Technology and Security, was a needed presence in cybersecurity innovation.

“The three of them had the right style to play matchmaker, to bring academia and industry together,” Nikolich said.

USA’s initiative began small with a few workshops and two $25,000 grants, enough to prime the pump and expand efforts across the country. Since then Yasinsac and Chambers have presented nearly two dozen workshops from Washington D.C. to San Jose, Calif.

Both led one this spring in a hotel conference room outside Birmingham. That afternoon, more than a dozen people, including innovators and mentors, sat around a square of tables. They were there to discuss their ideas and the basics of marketing a product.

“GOOTB!” read a slide put up by Chambers. “Get out of the building,” he told them, talk to users and customers, and don’t confuse the two.

If the product is electronic medical records, Chambers explained, the customer is a hospital or clinic, but the end users — the people you want to talk to in order to make your idea workable in the real world — are doctors, nurses, patients, software purchasers and data-entry specialists.

If the product needs investment, either from private enterprise or government support, Chambers said, keep it simple.

If some of the advice seems straightforward, it is. Marketing a product simply isn’t in the DNA of most scientists, Yasinsac said.

There’s at least an early sign that USA’s outreach is paying off. After the first year of the grant, applications climbed for a certain line of federal funding that helps cybersecurity researchers bring existing research to practice, Nikolich said.

At the Birmingham-area event, one of the attendees was Dr. Patrick Traynor, co-director of the Florida Institute for Cybersecurity Research at the University of Florida. Traynor is on his second start-up. The first was funded by venture capitalists, but he’s seeking more control over this one and attended the workshop for advice.

There, he was surprised to be introduced to two mentors that Yasinsac and Chambers brought to the table.

“Many people may want to have an impact but don’t know how,” Traynor said. “A workshop like this will help clarify the path from crazy research idea to practical product. Now I know who I can harass. This has made the trip worth it.”