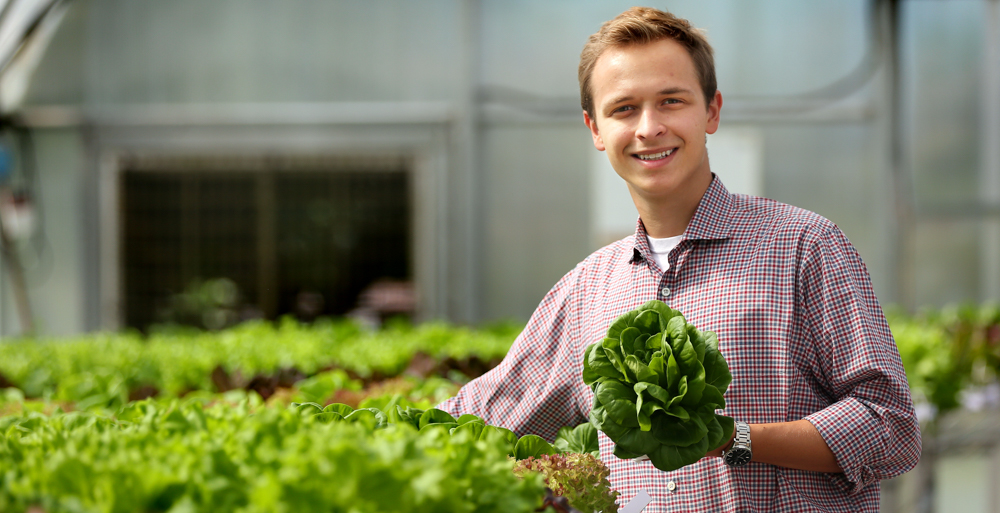 Zane Patterson's official title at Shipshape Urban Farms is account manager. But working at a start-up means pitching in wherever he's needed, and Patterson said he thrives on that culture. "I enjoy the flexibility of entrepreneurship,” he said.

Zane Patterson grew up with his parents telling him he could sell ice to an Eskimo. Today he’s selling a way to use that water, and other resources, more efficiently.

Patterson, who graduated in May from the University of South Alabama with a major in biology and a minor in entrepreneurship, is an account manager at Mobile’s Shipshape Urban Farms. He took the job after completing a spring internship with the company.

As a way to raise revenue, support the mission and use the produce supplied by the prototype models – the first is nearly complete – Shipshape also sells its vegetables and produce through weekly and monthly memberships.

Patterson is charged with selling both, and pitching in to help wherever he’s needed. That can mean literally getting his hands dirty in the garden, located in south Mobile County. The other-duties-as-required role is something that drew Patterson to Shipshape.

“I love the start-up culture,” said Patterson. “I enjoy the flexibility of entrepreneurship.”

Patterson points out that Shipshape co-founder Jeff Marcus, who graduated from USA in 1982 with a degree in psychology, jumps in on everyday tasks along with everyone else. And he used to be vice president of a $3 billion business.

At a large, established company, Patterson said, people tend to stay in their lanes. At a start-up, everyone has input and can bring ideas to the table that propel the company forward.

Patterson attributes his fit to the company to three things: His attraction to start-up culture, human interaction and connection to the earth.

He began at South with a focus on medical school. The human element attracted him to that, but making a career out of being a physician or a lab scientist was not his calling. So he took a management theory class in the Mitchell College of Business and got hooked.

Sales and business feeds Patterson’s need to collaborate and create.

Gardening and light farming runs in the family’s DNA, Patterson said, so there’s a familiarly with the product he’s selling.

His grandparents didn’t grow up with the same opportunities as Patterson did, and would grow produce to take care of themselves and their neighbors. He recalled that they would grow corn and give some to the family across the street, who in turn would make tamales to share.

And, just like that, Patterson jumped into a sales pitch.

“Our goal is to bring communities together by helping them have access to fresh local produce, no matter where you are in the world,” he said.  “That’s the beauty of our system, as long as you have power and water, you can put our container gardens anywhere in the world and they will produce food for people.”

The target audience for Shipshape includes non-profits, such as those specializing in job training for the homeless, universities to use as teaching tools and urban farmers. The price tag runs in the upper five figures and includes a trip to Mobile to learn how to set up and use the containers.

The company has plans to put eight container gardens on a quarter-acre lot in downtown Mobile. That quarter acre, Patterson said, will produce the equivalent of 30 acres of food.

The climate-controlled, closed-loop system – which you can adjust with a phone app, of course – uses less energy and 90 percent less water compared with conventional farming practices, according to Shipshape.  It prevents runoff into waterways and reduces the impact of pests, weather and disease.

Patterson said he has business ideas of his own, and working at Shipshape is the continuation of an education he started at South. The classroom taught Patterson what he needed to know about how start-ups work and gave him the tools he needed to build out his sales strategy. The struggle, he has to live. “It’s like a lab version of class,” he said of his job.

As Patterson prepared to graduate, he only applied for one job. He may have been able to get better pay and benefits and a more comfortable beginning elsewhere, but Shipshape offered something unique.