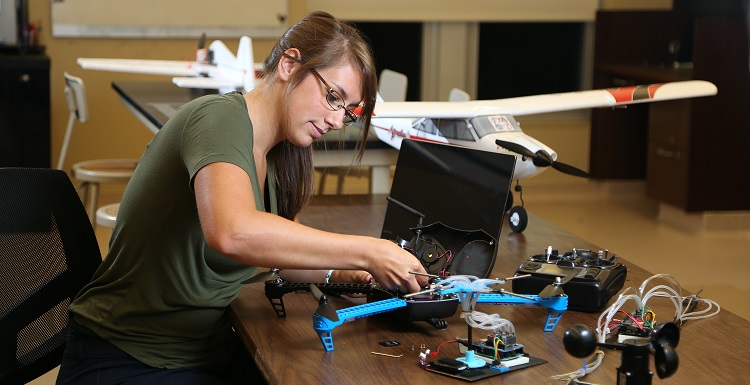 Lisa Schibelius, a master's student in mechanical engineering, is the lead person on the FAST lab's quadrotor project, which gathers atmospheric data along the Gulf Coast.

For Dr. Carlos Montalvo and his team of students, their futures are definitely up in the air. And that’s how they like it.

Montalvo, an assistant professor of mechanical engineering at the University of South Alabama, is also director of South’s Facility for Aerial Systems and Technology. FAST, in other words. It’s an appropriate acronym, because the aerospace industry is moving very fast.

“I think Airbus put aerospace engineering on everyone’s radar,” Montalvo said, referring to Airbus’ Defense and Space, Engineering, and Final Assembly Line facilities in Mobile. “‘I want to work there,’ kids say. ‘How do I get there?’ They see our research and they say, ‘Wow, that is what I want to do.’”

Whether “there” is Airbus, another engineering facility or even a college classroom, Montalvo’s students – there are seven of them right now – work in his FAST lab, where they are busy this summer creating autonomous systems that help the surrounding community; for example, quadrotors with atmospheric sensors that gather weather data. “We solder it all together in the lab; me and the students,” Montalvo said. The quadrotor is more than just manual labor and data collecting, though.

“For the future of this project, we envision a fleet of quadrotors – and maybe even fixed-wing aircraft – taking off autonomously to obtain atmospheric data to gain a better understanding of the sea and bay breezes along the Gulf Coast,” said Lisa Schibelius of Bayou La Batre, a master’s student who got her mechanical engineering bachelor’s degree from South and is the lead on this project. “They could also land themselves, charge in their own stations in unique locations and then take off again – multiple times per day.”

The project is a joint effort with USA’s earth sciences department, and Schibelius, Montalvo and earth sciences chair Dr. Sytske Kimball have presented their findings at several conferences since last summer.

“Learning by doing. The best way to learn something,” Montalvo said. His FAST lab is a hands-on experience for everyone involved, and that is totally by design.

“Everyone, at the end of the day, just wants to get their hands dirty. Soldering, 3D printing, foam cutters, balsa wood, carbon fiber, Arduinos, you name it. We are engineers and we want to build something tangible,” he said.

Collin Carithers, a mechanical engineering junior from Mobile who has learned to pilot the quadrotors, compares the process to solving a puzzle.

“Most of the time you have to sit down and design your own pieces to complete it. The problem you are given is the border of the puzzle. Previous work or knowledge fills in some of the interior area, and the final pieces come from either an engineer or, more likely, a team of engineers,” said Carithers, who is enrolled in South’s Summer Undergraduate Research Fellows program, or SURF.

Montalvo also believes students learn faster and better when they learn on their own, so there’s no spoon-feeding. Some students work in the FAST lab as part of his Directed Independent Study program. The rigors of the class are made clear by Montalvo on his FAST website, which cautions:

“If you are looking for an easy A and 3 credits this DIS is NOT for you. You have been warned.”

Despite the warning – or maybe, because of it – his FAST program attracts the best of the best. “Students in the DIS love it because they do research and get three credits,” Montalvo said. “But I expect a lot from these students, including a detailed monthly report, weekly meetings, create schedules, timelines. At the end of the semester, I get a 15-page research report explaining what they’ve done in the semester.”

“Being a part of the FAST lab has been extremely challenging, but in doing so, I have become a better programmer, designer, researcher and student,” said Schibelius, who is interning this summer in Airworthiness at the Airbus Engineering Center.

Because the FAST program is tough, Montalvo says even the best students may encounter something new.

“Students who come through the lab are already overachievers and want to do more,” he said. “They’ve never hit a wall before, so it’s interesting, almost a coming-of-age thing, on how they react and how they figure out how to overcome it, put some thought into it, and the process makes them stronger. When they start their careers, they are ready to become problem-solvers.”

Brandi DePineuil of Ocean Springs graduated from South this spring with a mechanical engineering bachelor’s degree and is now an “Innovation” intern at the Airbus Engineering Center, working part time for Research and Technology and part time for the Stress department on a joint R&T/Stress project.

“Right now, I am writing a stress summary report as well as doing an R&T project related to the Airbus Mobile Final Assembly Line here. The work I did with Dr. Montalvo helped me for my work here (at Airbus),” she said.

“My first research project I did with him was very fast-paced and the end product was a technical paper that we have had published twice now, including in an international, peer-reviewed journal,” DePineuil continued. “I am excited for the opportunity to be a part of an industry that creates and shapes the future and the surroundings of everyone.”

DePineuil’s excitement is a feeling that permeates the entire FAST program, including its director. “The lab is a fun place,” Montalvo said. “A percentage of students are there because they like the energy of the lab and want to do something fun. Flying airplanes is the coolest thing in the world, in my opinion. When things work, I’m just as excited as they are.”