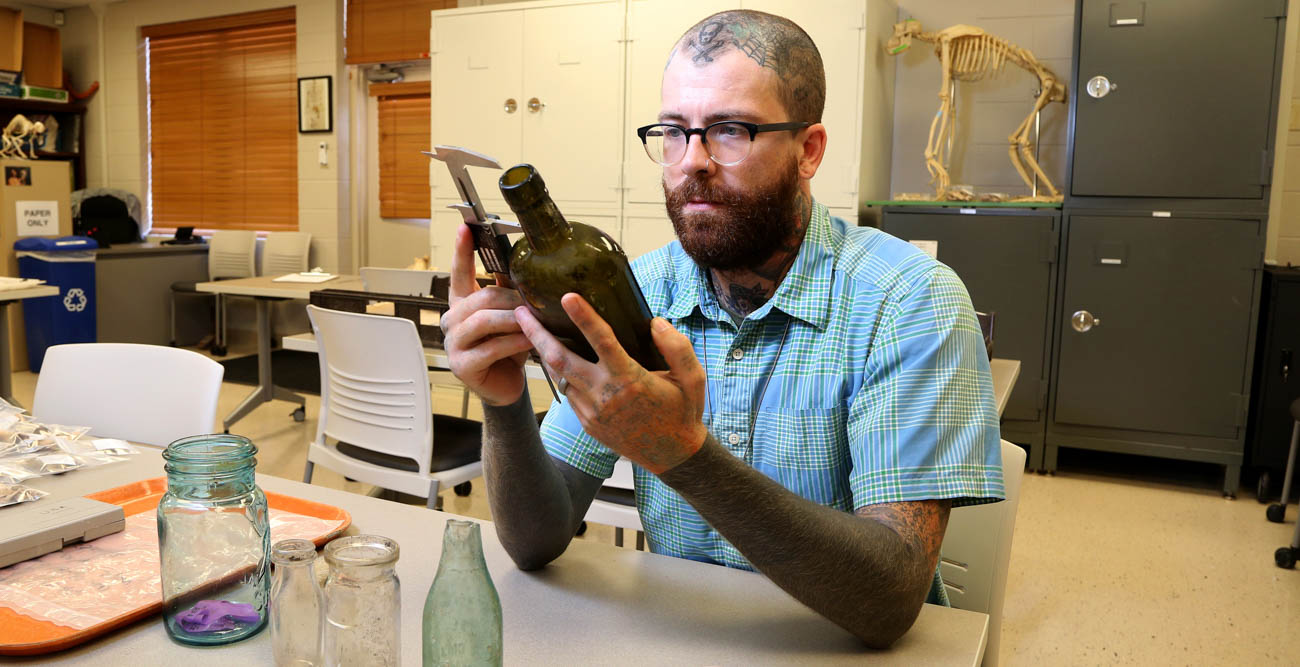 Dusty Norris, a graduate of the University of South Alabama’s anthropology program, is using an archaeology tool to record information about one of the artifacts found at the sites of the shotgun houses in areas of downtown Mobile. This preliminary work is being done as plans for the Mobile River Bridge and Bayway project moves forward.

Mobile’s historic shotgun houses, long and narrow, were built in the early 1800s and 1900s. Called “shotgun” houses because a theoretical shotgun blast through the front door of these one-room wide structures would go straight out the back door, they were popular homes throughout downtown’s residential areas.

As plans for the Interstate 10 Mobile River Bridge and Bayway project continue to move forward, preliminary archaeological fieldwork is being done at the site of several shotgun houses in several areas of downtown Mobile by the University of South Alabama Center for Archaeological Studies and the Alabama Department of Transportation, or ALDOT. The archaeologists want to know not only who lived in the houses and when, and what they left behind, but also what was their life like.

Dusty Norris, a native of Camden, Ala., has been doing preliminary fieldwork with USA students at several of the shotgun houses. He graduated from South this spring with a bachelor’s degree in anthropology and said the experience has been rewarding.

“Interacting with people and informing the public about our findings is a major part of urban archaeology and working with the USA field school students has been a blast,” he said. “The students provide fresh new ways of thinking by sharing a different perspective.”

Norris, who is attending graduate school this fall in anthropology, said they have found mainly everyday household objects, things people consumed or used on a regular basis. He said it can be quite challenging trying to connect the artifacts they find to how people lived.

“Urban environments can be disturbed or have housed many different people, ideas and ways of living,” Norris said. “Trying to determine what belongs to who is hard, but rewarding.”

Oral history is also playing an important role in this project. Dr. Kern Jackson, an assistant professor of English and director of the African-American Studies Program at South Alabama, has engaged members of the neighborhood to learn about the history of the people who lived in the shotgun houses.

“During the 1940s and 1950s, working class African-Americans and people of different races lived together in the neighborhoods of ‘Checkerboard,’ which is considered ‘Down the Bay.’ Many of them came to Mobile during World War II to work at the shipyard.”

For one component of his research, Jackson interviewed community members who were sitting on their porches, riding bikes through the neighborhood or enjoying games at the recreation center.

“I spent three weeks talking to regular folks about who lived in the shotgun homes and how they worked at the shipyard and other places around Mobile,” he explained. “This is how the work of humanities is done. Making a difference through discovery is part of South’s mission.”

About 20 years ago, a South Alabama archaeological team did a large excavation project where Calloway-Smith Middle School now stands, which is on the north side of downtown Mobile.

“This Calloway-Smith Middle School location was once an African-American neighborhood, and we uncovered structural remains of the houses that stood there, as well as household artifacts and personal items that belonged to the people who lived there,” said Bonnie Gums, USA archaeology lab supervisor. “Using such sources as the Mobile city directories and federal censuses we identified many of the families who lived in this neighborhood, as well as their occupations.

“Now our work on the I-10 Mobile River Bridge and Bayway project has brought us to the south side of downtown in a predominantly African-American neighborhood. Our excavations should be useful for making comparisons of the everyday lives of people from different neighborhoods during the late 1800s and 1900s.”

Dr. Philip Carr, the Chief Calvin McGhee Endowed Professor of Native American Studies and professor of anthropology at South, is overseeing the operations of the dig to make sure quality archaeological investigations are being conducted in compliance with federal regulations and state standards that meet the needs of ALDOT. Carr updates ALDOT’s environmental section regularly.

“We are discussing where to place archaeological excavation units. We are also coordinating with local ALDOT personnel to arrange for a backhoe to remove fill from a site so we can investigate what is preserved underneath, writing management summaries about our findings and, at times, using a shovel and trowel to investigate what is in the ground, which is accomplished by our archaeological field supervisors and technicians.”

Carr said investigating Mobile’s past is important to better understand the present and preserve it for the future.

“For me, investigating the lives of occupants of shotgun houses is important because their past is not often recorded elsewhere,” he said. “These tend to be the forgotten people in history textbooks. Through archaeology, oral history and documentary research, we can learn something about the lives of people who were important in Mobile’s past even though their contributions may not always have been recognized.”

The collected information from this dig will be reported to ALDOT and the Mobile River Bridge and Bayway project team in an environmental impact statement.