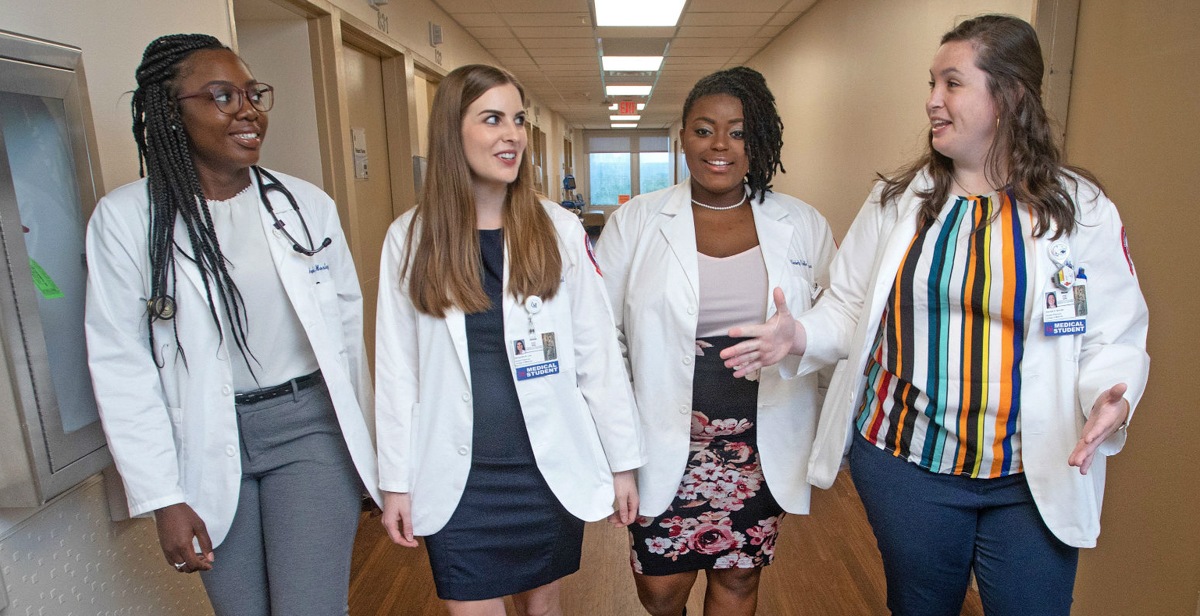 Angela Mosley-Johnson, Samantha Lee, Kimberly McWilliams and Hannah Brooks chat during a break in clinical rotations at USA Health University Hospital. The third-year students at the University of South Alabama College of Medicine have been awarded scholarships from Blue Cross and Blue Shield of Alabama as part of initiative to improve access to healthcare in underserved areas of the state.

Four medical students at the University of South Alabama College of Medicine will receive $60,000 scholarships from Blue Cross and Blue Shield of Alabama as part of a $1.2 million initiative aimed at improving access to healthcare in medically underserved areas of the state.

Angela Mosley-Johnson, Hannah Brooks, Kimberly McWilliams and Samantha Lee, all third-year medical students at the USA College of Medicine will receive $30,000 a year, which covers tuition for the final two years of medical school. Following their residency training in a primary care specialty, the four will commit to practicing in underserved communities in Alabama for a minimum of three years.

“Serving the healthcare needs of Alabamians has been a longstanding tradition for our graduates,” said Dr. John V. Marymont, vice president for medical affairs and dean of the USA College of Medicine. “These four students are answering the call to take their skills to areas that lack sufficient access to healthcare. They are continuing in this important tradition.”

In 2018, Blue Cross and its charitable organization, The Caring Foundation, awarded $60,000 to three students at the USA College of Medicine as part of the five-year scholarship initiative.

Mosley-Johnson was raised in the small town of Cuba, Alabama, in Sumter County, but said that wasn’t familiar with the issue of health disparities until she took a health psychology course as an undergraduate at Vanderbilt University. She changed her major from clinical psychology to medicine after completing a thesis on health disparities among African Americans.

She said she intends to become an obstetrician-gynecologist. “It is my hope to provide exceptional medical care to women, but to also advocate for women’s health at a local and federal level,” Mosley-Johnson said. “I would love to one day establish a clinic in Cuba or York, Alabama, or partner with a nearby hospital to provide care to women in the community.”

Brooks said the scholarship will help her fulfill her long-term goal to serve her hometown of Mobile. “For me, the most compelling aspect of medicine has always been the physician’s role as servant,” Brooks said. “Personally, I feel that the physician’s role of servant is most prominent in primary care, which is one of the reasons why I have always felt drawn toward pediatrics. This scholarship is for students who want to do just that.”

McWilliams, a native of Alexandria, Alabama, said she intends to focus on family medicine and psychiatry. “My ultimate goal is to open several nonprofit clinics that focus on preventive care and help change the perception of medicine in the community,” McWilliams said. “I hope to facilitate an atmosphere that provides patients with both the educational means and physical opportunities to take charge of their mental and physical well-being.”

Lee, a native of Mobile County, said she applied for the scholarship because she had already planned to stay near home and close to family in Theodore and Wilmer. “I was honored for the opportunity to apply to a program that would help me to increase the quality of primary care in a community that has helped me become who I am today,” Lee said. “My long-term career goal is to ultimately bring more mental health awareness and preventative care to my community.”