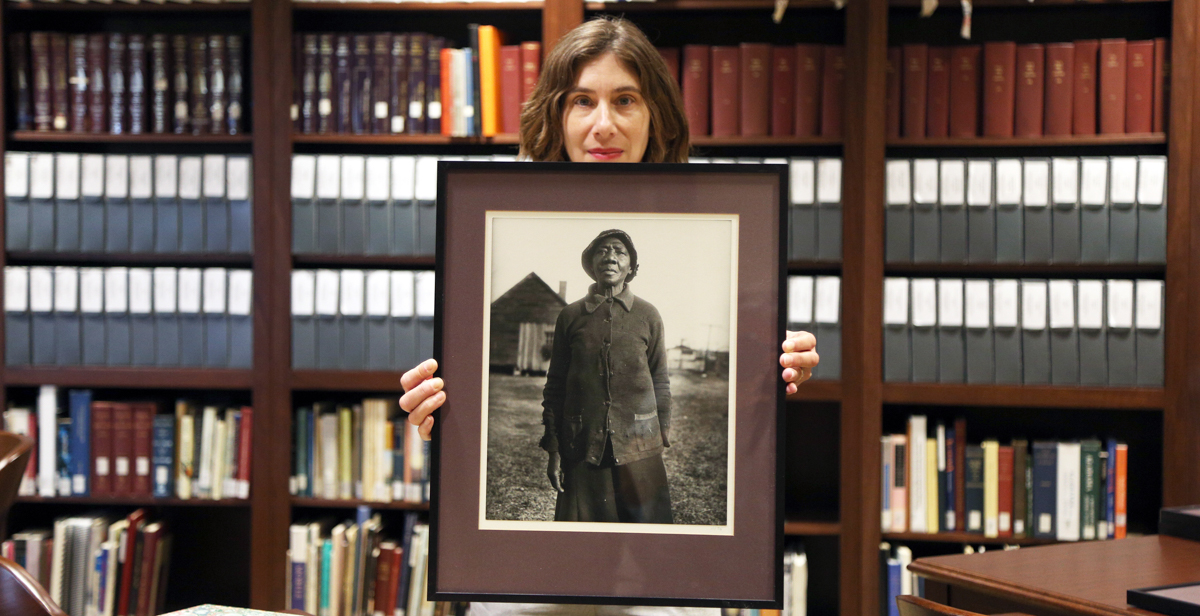 Deborah Gurt, archivist for the Doy Leale McCall Rare Book and Manuscript Library, holds one of the Eudora Welty prints in the Iredale Collection donated to the University of South Alabama. The photo is one of a series taken by Welty as part of her job with the Works Project Administration during the Great Depression.

The Doy Leale McCall Rare Book and Manuscript Library at the University of South Alabama will celebrate a Florida couple’s gift of a prized literary collection on Friday, Sept. 6.

The 166-piece collection of published works from the Palaemon Press of Winston-Salem, N.C., includes books, poems and broadsides as well as photographs by Pulitzer Prize-winning writer Eudora Welty. The press was owned by Stuart Wright, who published materials primarily by Southern authors, and in most cases offered the first printing or first separate appearance of works in collector editions.

The library will honor the donors beginning at 2 p.m. with a Writer’s Roundtable in the auditorium of the Marx Library. Dr. Steve Trout, chair of English; Dr. Sue Brannan Walker, retired chair of English and former poet laureate of Alabama; and Frye Gaillard, writer-in-residence at South; will discuss the writers included in the collection. At 4 p.m., the opening reception will be held in the library’s Rodning Gallery, where the materials will be displayed. The events are open to the public.

“I knew Stuart Wright, who was a very erudite, very knowledgeable and very cultured individual, and over the years I developed a close friendship with him,” said Dr. John Iredale, a retired podiatrist from Durham, N.C., and his wife, Beverly, who are gifting the materials to the library. “When Stuart began the press, I was one of his patrons.”

The Welty photographs hung in Iredale’s office until his retirement. “They were on the wall in my office for probably 40 years, and some patients brought family or friends just to see the pictures,” Iredale said.

Welty took the photographs in her job with the Works Progress Administration during the Depression, many years before she was recognized for her writing. She traveled around her home state of Mississippi, taking photographs of people going about their daily lives. The photographs depict a wide range of people, both black and white, and places, including a small town’s courthouse square and the ruins of an antebellum home, that in later years became the characters and locales of her short stories and books.

“The collection represents an area of collection that we would like to expand,” said Deborah Gurt, archivist of the McCall Library. “We’d love to use this donation as a cornerstone to build a set of regional literary papers that might attract the attention of students and scholars.”

The Iredale’s gift includes works by some of the most prominent Southern writers of the 20th century. Besides Welty, there’s the work of Robert Penn Warren, Shelby Foote, James Dickey, William Faulkner, Erskine Caldwell and Flannery O’Connor.

The Iredales selected the McCall Library for their collection based on an internet search of Southern universities.

“Duke University had Stuart Wright’s papers, which means they had a complete collection. The University of North Carolina said they didn’t need it because Duke was close to them,” Iredale explained. “So, Beverly got on the computer and looked for a university with Southern history, and when we contacted the McCall Library, your person there answered our inquiry immediately.”

The Iredales, who retired to Punta Gorda, close to the western Gulf Coast of Florida, said they like knowing their collection isn’t too far away from their new home.