E-Sailing to the Edge of Space 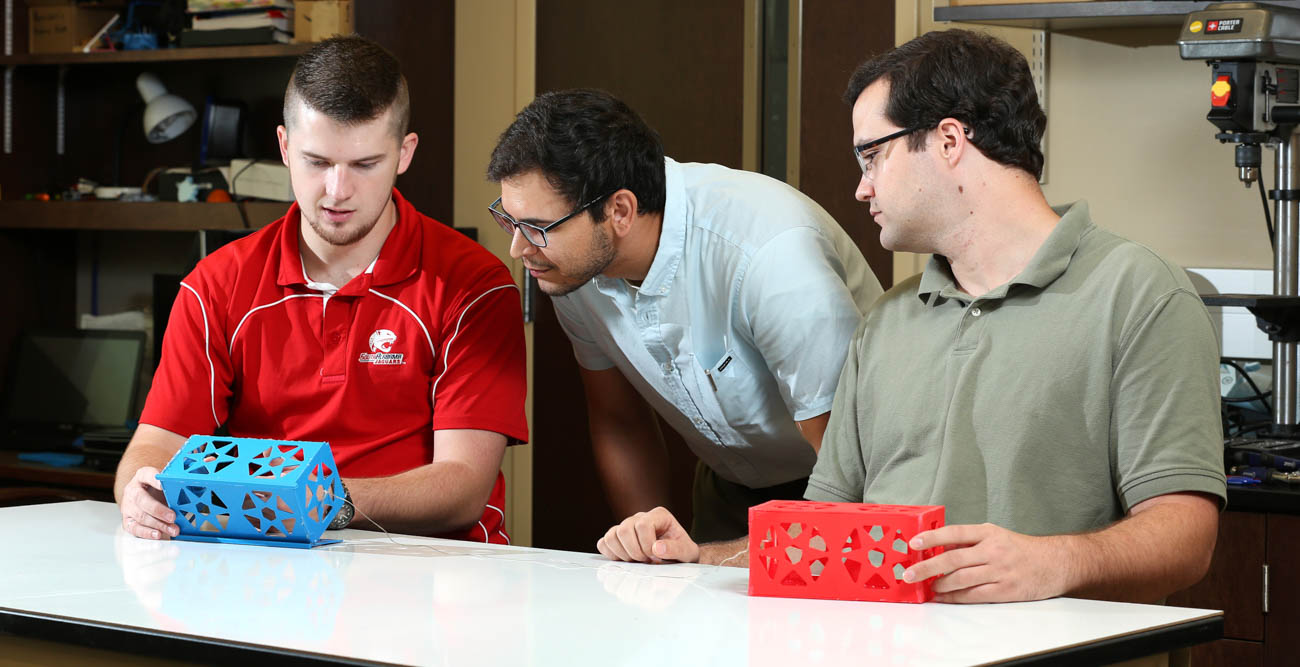 Graduate students Harrison White and Matthew Simmons flank Dr. Carlos Montalvo as they discuss the tradeoff from having two or more miniature satellites, called CubeSats, connected via a tether from an E-Sail. More CubeSats means more tethers and more thrust, but also more chances of tangling.

“This has never been done before.”

With those six words, Dr. Carlos Montalvo captures the excitement of his current research.

Montalvo, an assistant professor of mechanical engineering at the University of South Alabama and director of South’s aerospace systems and technology lab, is working this fall with engineering graduate students Matt Simmons and Harrison White. Their ultimate goal? Harnessing solar wind to propel spacecraft to the very edge of space.

His method is to use something called the Electric Sail.

“The Electric Sail (or, E-Sail) is a relatively new concept of advanced in-space propulsion,” Montalvo said. “This technology has the potential to provide propellant-less propulsion throughout the solar system.”

He explains briefly how it works. “An Electric Sail deploys multiple long tethers (about 20 kilometers, or 12 ½ miles, long) that are positively charged. The solar wind interacts with the tethers to provide propulsion.”

By contrast, Montalvo says the E-Sail's characteristic acceleration can allow it to reach the heliopause region in 10 years. It would take a solar sail 20 years and chemical rockets like the Voyager I would take 24 years. “The increase in performance from a solar sail to an E-Sail lies in the sheath width of the electric sail, which grows with distance from the sun,” Montalvo said.

In South’s College of Engineering, the ongoing work of Montalvo, Simmons and White is being conducted by starting with a dynamic model that contains a combined multi-body satellite model and a flexible tether. The model also includes an electric propulsion model. “The complexity in the system is due to the fact that the entire system must spin to counteract the electric propulsion force which is caused by charging the tethers,” Montalvo said.

Simmons and White are active participants in Montalvo’s research.

“Going forward, the research I will be helping with is validating the simplified simulation as well as adding in other styles of E-Sails to the simulation,” Simmons said. “My primary focus is on designing and prototyping a space tether deployment and braking mechanism,” White said. The two graduate students received their bachelor’s degrees in mechanical engineering from South, and look to earn their master’s degrees in mechanical engineering in 2020.

Montalvo, whose doctorate is in aerospace engineering, has spent the past two summers at NASA’s Marshall Space Flight Center in Huntsville, developing full scale and simplified simulations of a barbell style E-Sail as well as other programs, such as the Mars Sample Return mission. The benefit of his research is obvious for students such as Simmons and White.

“This has and will help me in school and in my career by exposing me to relevant and new research and problems that NASA and other professionals are currently working to solve,” said White, who is a graduate of Mobile’s Baker High School, and counts his mother and brother as South alums. “It challenges me in ways that classes can't and helps me think in new and out-of-the-box ways. Specifically, because the E-Sail and all of its components will be in the vacuum of space, which alters virtually all calculations associated with its design.”

Simmons, who’s from Montgomery, says he is “definitely leaning” toward aerospace research as a career. His graduate school experience is confirming that. “For school, it helps because if I can understand the math behind the E-Sail models then I can handle pretty much anything the master's coursework will throw at me. If I want to pursue aerospace research as a career, this is a big stepping stone and shows employers I know what I'm doing.”

Down the road, Montalvo sees the E-Sail as an especially effective method to deploy small spacecraft for deep space missions. “This has never been done before. It would pave the way for small secondary payloads to reach uncharted territories of our universe,” Montalvo said. “They can be used for near Earth asteroid missions as well.

“I'm very excited to see this happen,” Montalvo said. “So many students walk through my door expressing interest in aerospace engineering and now we have a way to satisfy some of those needs. As an aerospace engineer myself, this is a great opportunity to grow the student body in aerospace, to increase research in this area and to enhance the area’s aerospace industry.”