Helping Unlock the Mysteries of Cancer 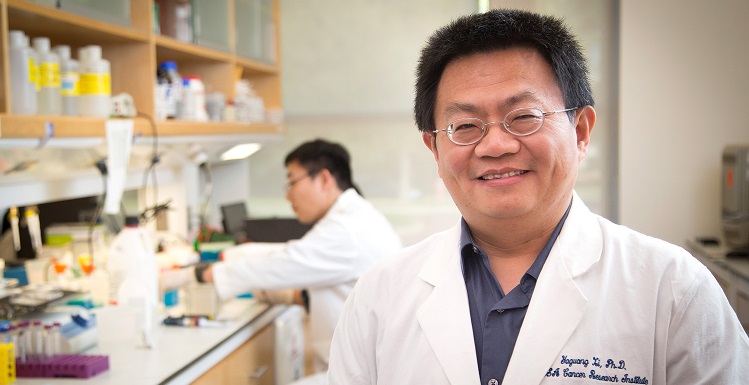 Dr. Yaguang Xi, an associate professor of oncologic sciences at MCI, was named the 2015 recipient of the Mayer Mitchell Award for Excellence in Cancer Research. Download larger image

In the 1990s, Dr. Yaguang Xi was in his 20s and practicing as a surgeon in China when he began to question his calling. He had just learned that the surgery he helped perform on a 17-year-old girl with gastric cancer would extend her life by only a few months.

“We were supposed to save her life, but we didn’t,” he said. “We were helpless. This was against my pledge to help patients!”

That was when the young surgeon began to consider seeking a different path to pursue his dream. Xi left his clinic job and decided to go back school to recharge. He entered graduate school in Peking University, one of the top universities in China, and earned a Ph.D. in cancer biology. After a short stay in France, Xi joined the USA Mitchell Cancer Institute as a postdoctoral fellow in 2004.

More than a decade later, Xi is a tenured associate professor of oncologic sciences at MCI. He was named the 2015 recipient of the Mayer Mitchell Award for Excellence in Cancer Research. The award and $10,000 are given annually to a promising MCI researcher to pay for travel and other expenses. In effect, it’s a vote of confidence by MCI Director Dr. Michael Finan and a select committee.

The son of an engineer and an accountant, Xi describes himself as a “translational” researcher who can “do the cross talk.” He understands what clinicians need to help their patients, and he knows how to bridge the gap between basic research and clinical care.

“If you think of diseases as locks, we are making the keys to help clinicians open the locks.” he explained, “Although most of the time, the keys are returned to us for polishing, or even remaking, we keep trying until the locks are unlocked.”

Becoming a translational researcher helped Xi fulfill his dream to help as many cancer patients as he can. “Working as a surgeon, I can only help a certain number of patients in my lifespan. However, if I can help 10 oncologists, for example, that number will be multiplied by the number of patients I can serve directly,” he said. “That’s what I like about my job.”

In 2008, Xi became the first recipient of the Colorectal Cancer Coalition Fellows Grant by the American Association for Cancer Research, which earned him a tenure track to lead his own research programs.  “The beginning of my independent career was not easy,” he said. “My wife complained that she saw fewer smiles and more gray hair.”

In 2009, Xi returned to the classroom as a student at the USA Mitchell College of Business, in an effort to better understand the U.S. business culture. “Being trained as a surgeon, I wanted to do everything quickly,” he said. “But you can’t bring the surgeon style into real business life.”

For the next three years, in addition to his work in the lab and the office, he spent two nights a week earning an MBA. “I never thought that I would use this new degree to change my career,” he said, adding, “I have not completed my goal, and I can’t give up. “

Xi used his studies to strengthen his skills in writing, presentation, communication, social skills and leadership. “I feel more confident in my job now,” he said, “My MBA studies benefit me more than just a degree.”

After graduation in 2012, Xi reached a new peak in his career. For four years in a row, he has received one extramural grant per year from the National Cancer Institute at the National Institutes of Health and the American Cancer Society. The most recent was an R01 grant for $1.78 million over five years to study the mechanistic role of small non-coding RNA molecules in the chemoprevention of colorectal cancer.

He and his team of five post-doctoral fellows work closely together, with him playing the role of coach.

“We want to help cancer patients and prevent tumor progression,” he said. “Our work focuses on exploring the underlying mechanisms of cancer metastasis to facilitate new drug development aiming to improve … survival in cancer patients with advanced diseases.”

Next, Xi says he is eager to find a solution to stop the metastasis of tumors – the spreading of cancer beyond the initial tumor site, which he says has been the “hallmark of our treatment failure.”  “This will be an ambitious task,” he said, “but I will challenge myself because I want to help patients and give them a better life.”