Accounting is the language of business. Students explore branches of the discipline, including tax, audit and analytics, on the way to such careers as financial analyst, controller, tax manager and auditor. Many graduates pursue certification as a CPA, CFE, CMA or CIA.

Accounting Turns Out to Be More Than Just Numbers 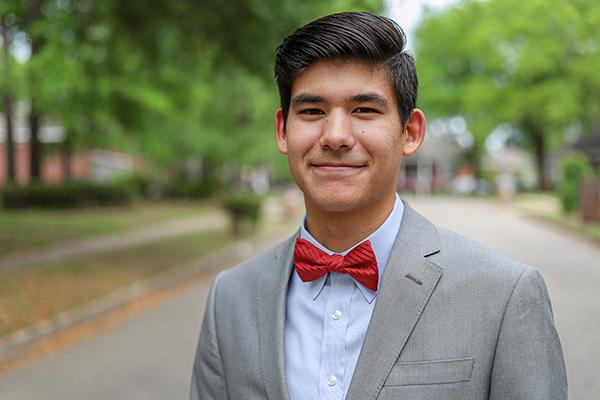 Accounting, as Andrew Hii discovered, requires a lot of decision-making. “It’s not about just the numbers. There are judgment calls, and some things are just not clear.”

At the Mitchell College of Business, Hii (pronounced “he”) learned a lot about his major that surprised him. For example, take auditing — the process of examining financial records for accuracy and adherence to accepted rules.

“Again, it’s not just about the numbers. It is about creating relationships with other people and finding out correlations between things. So there is lots of data analytics, which I didn’t really know until I started taking the auditing class.”

Also, Hii said, “I didn’t realize how much the field of finance plays a part in accounting. It’s almost like a dual major with accounting.”

“It is about creating relationships with other people and finding out correlations between things.”

Hii is a Mobile native who used to live almost across the street from South. Before college, he cultivated several businesspeople as mentors. “I asked, ‘What are you looking for in your business? What’s valuable to you?’ They said accounting.”

He liked its possibilities. “Many of the accountants that I’ve talked to have started off in accounting but then transferred into management, marketing, entrepreneurship or other fields of business. If you want to make a pivot in your career, you can.”

At South, the enthusiasm of his professors inspired him, especially when they shared real-life stories from their own professional careers. “It’s not just something they do because it earns money. They do it because they love it.”

And what would he love? At first, probably staying near his family in Mobile, maybe working in personal tax preparation. Then, perhaps a pivot to his favorite sport. “Later in my life,” he said, “I would like to move to Europe and do accounting for a soccer club.”