The general business program gives students a variety of skill sets across the business discipline and the flexibility to learn anywhere. Students gain knowledge and expertise in a number of areas, including management, entrepreneurship, analytics, marketing and finance. 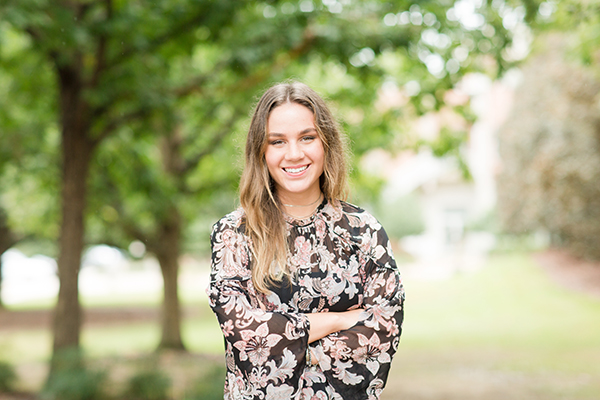 Majoring in general business at the University of South Alabama’s Mitchell College of Business showed Marina Blankenship the advantages of uncertainty. She chose the major unsure of what career to pursue. No matter, she’ll be prepared.

Blankenship came to South from Ocean Springs on the Mississippi Gulf Coast, an hour west of campus. “It was close enough to home but far enough away from home,” she said, “and it was just small enough but just big enough.”

She switched her major from marketing to general business to keep her options open. “You have such a wide array of classes you have to take. It wasn’t all finance classes or all accounting classes. So it gives me more flexibility in applying for jobs.”

“You have such a wide array of classes you have to take. It gives me more flexibility in applying for jobs.”

“I pretty much worked retail and also worked in the kitchen in food production,” Blankenship said. “Although those roles sound relatively elementary, the real-world job experience dealing with the internal work hierarchy and guest interactions and problems was invaluable.

“It was great to represent South down there, too. A lot of people would see my nametag and say, ‘Go, Jags.’”

Whatever is in her future — she hopes to return to Disney after graduation and possibly study for a master’s degree — she said her general business studies leave her ready to handle it.

“I actually took three or four classes in each of the other business major fields,” Blankenship said. “So it gave me a lot of knowledge that I would actually use in the real world. I learned the basics of each of the majors in the college.”