On the Riverfront: Down the Bay and the Maritime Industry in Mobile

As one of the largest port cities in the country, it is no surprise that shipping and maritime industries have long been an important part of Mobile’s economy. This has been especially true for Mobile’s Down the Bay neighborhood. Located just south of downtown from Government Street down to Virginia Street, this historic neighborhood has been a major part of the City’s maritime commerce since the 19th century. Down the Bay’s position on the Mobile Riverfront and railway connections have made it valuable real estate for shipbuilding, repairs, cargo transport, fishing, and many other businesses. Even through booms and busts, the Port of Mobile and shipping industries continue to play a big role in Down the Bay’s economy.

Down the Bay has a long history of maritime industry. Sanborn Insurance maps from the 1880s and 1890s reveal that the riverfront was lined by piers on piles. The city blocks closest to the water were predominantly occupied by large warehouses and storage yards for inbound and outbound goods including lumber, fertilizer, coal, and cotton. The freight depots and railroads to the north on Church Street carried these goods to and from other parts of the state and country. In 1916, the shipbuilding facilities in the area expanded with the founding of the Alabama Dry Dock and Shipbuilding Company (ADDSCO), consolidating several smaller shipyards. 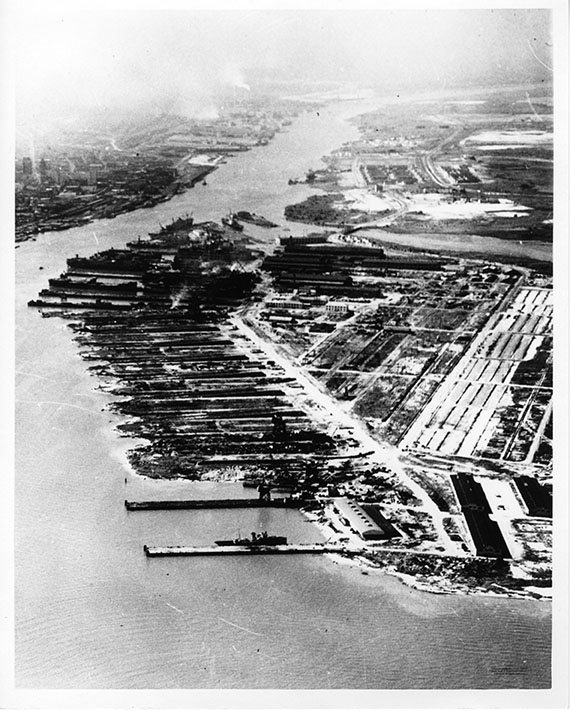 Photo Caption: An aerial view of the ADDSCO shipyards in the 1940s. Downtown Mobile and the north part of Down the Bay can be seen in the top left of the photograph.  Alabama Dry Dock and Shipbuilding Collection, The Doy Leale McCall Rare Book and Manuscript Library, University of South Alabama.

During World War I, ADDSCO built and expanded their facilities on Pinto Island, directly across the Mobile River from Down the Bay, into a massive complex employing over 4,000 people. Business slowed following the war, and ADDSCO retracted to focus on repair work and construction of the new Bankhead Tunnel. The shipbuilding industry in Mobile reached its peak during World War II, when the U.S. Maritime Commission funded the construction of Liberty cargo ships and T-2 tankers to provide logistics support for the war effort. ADDSCO’s employment soared from barely 1,000 workers to 30,000. In total, ADDSCO built twelve Liberty ships and 102 T-2 tankers before the end of the war in 1945. 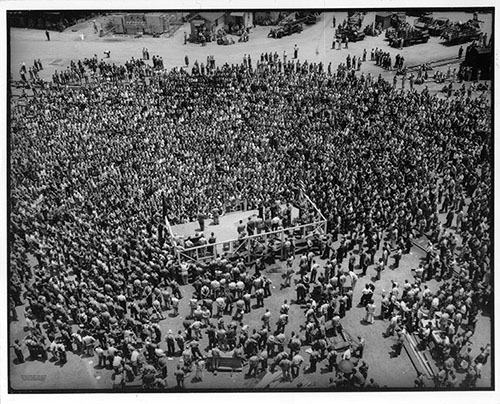 The war economy boom brought thousands of war workers from across the state and country into Mobile and Down the Bay. Over 89,000 people moved into Mobile County from 1940 to 1943, and the city’s population rose from 78,000 to 125,000. The sudden population growth led to major overcrowding in schools and housing with rents skyrocketing and living conditions in boardinghouses deteriorating. It was not until 1943 when Federal housing projects started to catch up with demand and provide some relief for the workers. Enough people in Down the Bay worked at ADDSCO for the company to set up a dedicated ferry service on Canal Street to shuttle workers across the river to Pinto Island. Production and employment at the shipyards slowed down to pre-war levels, though ADDSCO continued to repair and build small numbers of naval vessels into the 1960s. 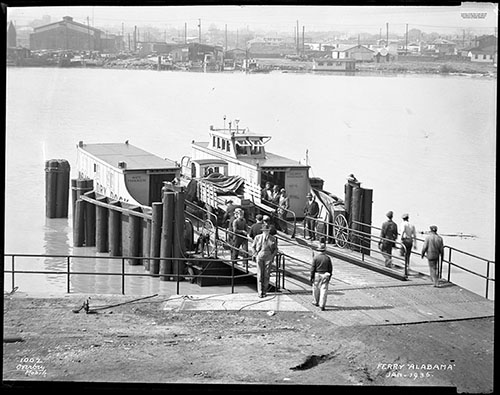 Aside from ADDSCO, other maritime businesses supported Down the Bay’s economy. Sanborn Insurance maps from the 1950s show the waterfront dotted with many smaller businesses supporting the shipbuilding industry. The Patterson Manufacturing Co. and Bender Welding and Machine Co. built small boats and barges on the riverfront between Eslava and Madison. The Mitternight Boiler Works on Palmetto Street built and repaired steamship boilers, employing a large number of workers. Junk yards and supply warehouses were also common along the waterfront. Further south, oil and gas companies moved their product via railroad before being loaded onto ships.

Even after the war, the 1950 census shows many residents of Down the Bay still worked in maritime-related jobs. Abbot May worked as a crane operator at the shipyard while his two adult sons, Willie and Lawrence, both worked on a tow boat. Many residents also worked as merchant marines or seamen. Elbert Wilson, for example, found work as a steward with the Alcoa Steamship Co. running cruises to the Caribbean. Sailors and workers often resided in rooming homes in Down the Bay. A rooming home owned by Nettie Smith on Royal Street housed eight workers, five of whom were merchant marines or stevedores.

During the war, more women found work in the shipyards. ADDSCO employed over 3,000 women by 1944. While many worked in traditionally female jobs such as secretaries and office clerks, over one hundred took up welding and other male-dominated jobs for much higher pay. While the company celebrated these women workers in publications, it was generally understood that their employment was a temporary war-time measure. By 1950, census data showed that only a handful of women worked in the shipyards, and were once again limited to office work. 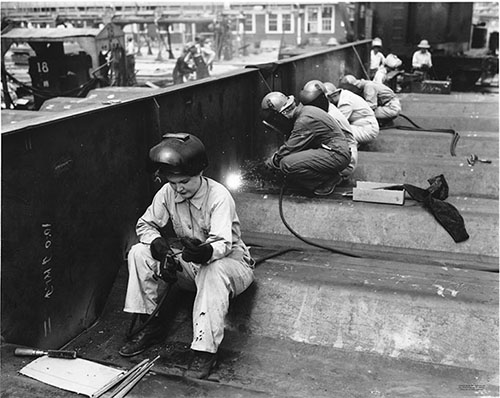 Black workers faced their own struggles in employment. Many shipyards, including ADDSCO, resisted promoting black workers to skilled positions and restricting them to work as common labor or helpers. Under pressure from the Federal government and civil rights activists like John LeFlore, ADDSCO eventually hired 12 black men as welders on May 24, 1943. In response, the next day an outraged mob of white workers attacked random black workers by throwing bricks and striking them with pipes. The riot continued for several hours until National Guard troops arrived from Brookley Field. The company’s solution to racial tensions was to establish segregated shipways where black workers could be promoted more freely without angering white workers. While this did lead to more promotions, it did not eliminate inequality. While there were some skilled black shipbuilders in the 1950 census, including welder Lynch Henry on Conception Street, most black workers from Down the Bay were still confined to common labor.

Down the Bay’s ties to maritime industry can still be seen today. Despite the post-war downturn in shipbuilding, ADDSCO lives on as Alabama Shipyard, and many of the other maritime industries can still be found on the waterfront in some form or another. The Port of Mobile is one of the top-ten largest in the U.S. ranked by tonnage, and one of the largest for coal imports and exports. Shipping has always been a part of Mobile’s history, and the Down the Bay neighborhood has played a major role in that history.

This post was written by Liam Hodges, a graduate student in the Public History program, as part of the I-10 Mobile River Bridge Archaeology project. For more information, check out www.mobileriverbridge.com. We are currently collecting stories about the history of Down the Bay. If you would like to share your story, call 251-341-3900 or email oralhistory@southalabama.edu to schedule an interview.