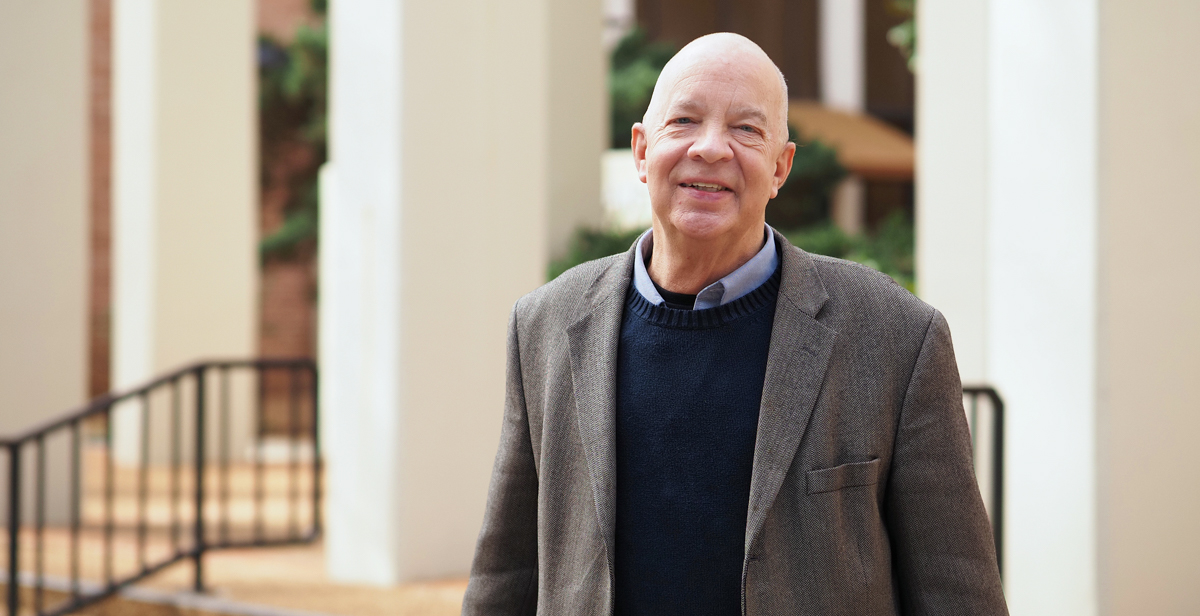 Dr. Kenneth Hudson, associate professor of sociology and social work at the University of South Alabama, urges students to challenge conventional wisdom using data. “I spend a lot of time looking at numbers, what I call the view from 33,000 feet. ... And there are certain kinds of questions where you have to land the plane, get out and walk around and talk to people.”

The University of South Alabama is running a series beginning Martin Luther King Jr. Day that focuses on South students, employees and alumni who are advancing Dr. King’s vision in six areas – poverty, jobs and wages, housing, education, justice and peace. Today’s story is on jobs and wages.

Dr. Kenneth Hudson teaches research design and analysis in the sociology department at the University of South Alabama, where his own research focuses on poverty, income inequality and the dual labor market.

Hudson studies trends in the labor market as the United States moved from agriculture and manufacturing to a service-based economy. Income inequality dropped in the decades after World War II, but has increased since the 1980s. Weakened labor unions helped create an economy where some occupations have strong wages and health insurance, while others offer temporary or part-time work with few benefits.

“Good jobs and bad jobs,” he said. “I wrote my dissertation on ways to measure and empirically demonstrate this dualism in the labor market.”

In his statistics courses, Hudson urges student to challenge what they think they know. How can they find ways to test theories and questions? What are the most effective methods to collect information, analyze it, and interpret the results?

“Teaching isn’t just disseminating information,” he said. “Teaching is a conversation. My goal is to nudge them toward looking at data. I’ll give you an example. Someone this week said that everyone has a college degree. Is that true? Well, no. About 30 percent of people in the United States have college degrees. People say, well, a college degree isn’t worth anything anymore. Is that true? Well, not if you look at the evidence. We know that at every level of degree attainment, there’s an increase in the average wage of those workers.”

As a social worker for 16 years, Hudson felt the frustration of people trying to escape poverty in neighborhoods with poor housing, high crime and little access to healthcare and education. As an academic for the last two decades, he’s co-authored papers such as “Health Care Apartheid: Race-Ethnicity, Labor, and Affordable Care.” His work returns again and again to a single question.

“Why do we, as one of the richest countries in history, have such high levels of poverty and high levels of inequality?” he asked. “Why is that? That’s kind of been my quest.”

Hudson rejects the belief, still popular today, that poverty is a result of moral failure, and that people are poor because they don’t work hard enough, or aren’t smart enough, or don’t try hard enough to better themselves. He thinks the truth is far more complicated.

Hudson is intrigued by ideas from biology, anthropology and behavioral psychology. In a 2020 paper, “An Evolutionary Theory of Inequality,” he argues that inequality is pervasive, in part, because of the need for humans to organize collective behavior in dominance hierarchies.

“It is perhaps the contempt that we show for the poor and those at the lower rungs of our society that provides the strongest basis that human inequality is rooted in our biology,” he said. “We have this propensity to behave hierarchically, to follow the leader, but we also don’t like being dominated. We have the capacity to create societies with a greater level of equality.”

Dr. Roma Hanks, chair of the department of sociology, anthropology and social work, respects the rigor of Hudson’s research and the importance of his subject areas.

Last year, when there was an opening in the social work program at South, Hudson was there to take over on an interim basis.

“We were really fortunate that he had that background and was willing to step into the position,” Hanks said. “I don’t know anyone who is more willing to help students with what it takes to be successful. He’s willing to teach courses in formats that are compatible with student needs, and this was long before COVID. So he was a pioneer in all of that.”

Hudson and Hanks have both done research funded by the USA Center for Healthy Communities and the Gulf States Health Policy Center. For more than a decade, they’ve worked with Black neighborhoods represented by the Bay Area Women Coalition in Trinity Gardens.

Hudson, 66, grew up north of Birmingham in Warrior, Alabama. He and his mother lived with his grandparents.

“I would say we were at the bottom end of the working class,” he said. “My grandfather was a coal miner. He worked in the mines for 40 years.”

After high school, Hudson thought he’d become a Baptist minister. He studied religion and psychology at Mobile College, where he learned a more liberal theology.

“I think my religion degree was the most important one I ever got,” he said, “because it helped me think critically about my own life experience, and how to affirm values such as empathy and equality and caring for other people.”

Hudson entered the seminary in Louisville, Kentucky, but decided to became a social worker. He earned two master’s degrees from the University of Louisville and spent 16 years working for the Commonwealth of Kentucky.

He was a case worker. He wanted to help people. Not everyone was so idealistic.

“Talk about a cold bath,” he said. “I learned that we don’t love poor people in America. We view people who are poor with contempt. From the very first day on the job, I witnessed that, and I’ve continued to witness it pretty much ever since. People at the bottom of the social hierarchy are not held in high esteem.”

In Mobile, and other Southern cities shaped by segregation, there remains a great deal of poverty and inequality. There are haves and have-nots, along with good jobs and bad jobs.

Hudson enjoys joining students in a conference room to talk back and forth about issues such as poverty and income inequality. He questions them about the governments, economies and cultures that shape people’s lives. He encourages them to look beyond Mobile, Alabama and the United States.

“How do some of our assumptions generalize to other societies across time and contemporaneously?” he asked. “Are the people in south Sudan the poorest people on earth because they don’t work hard enough?”