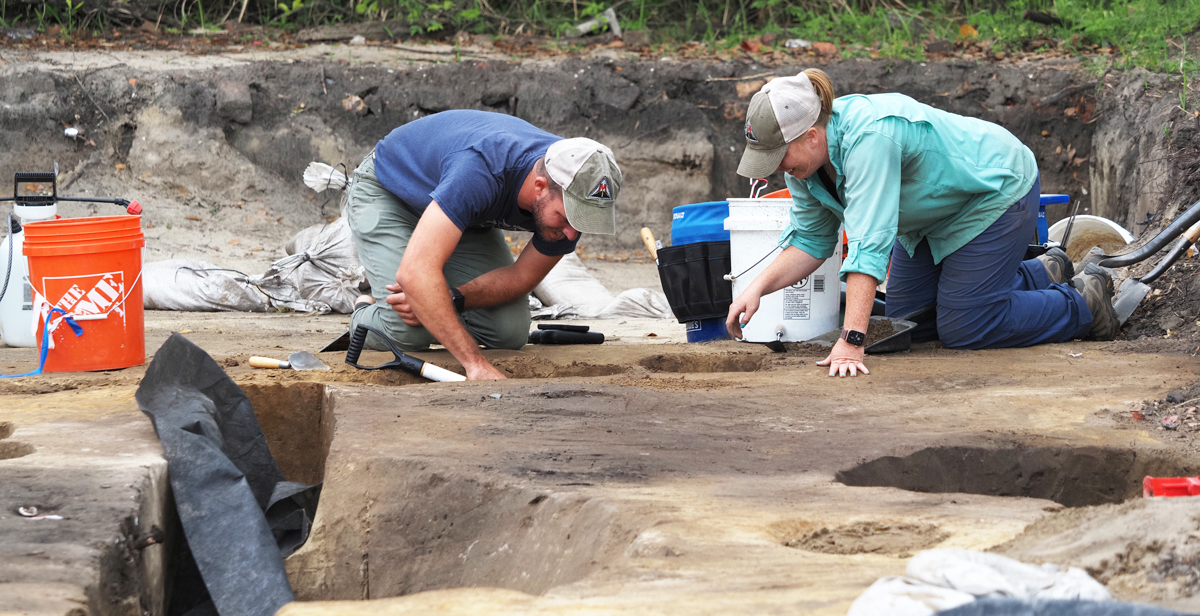 Emily Warner, right, with the USA Center for Archaeological Studies, and Thomas Grace, with Wiregrass Archaeological Consulting, bisect a feature in the soil at a site that is along the route for a proposed Mobile Bay bridge. After completing the excavation of half the feature, they will photograph and draw the profile, and then excavate the second half.

The University of South Alabama Center for Archaeological Studies is in the final phase of excavating artifacts to make way for construction of the planned Interstate 10 Mobile River Bridge. South is leading the project with help from the Alabama Department of Transportation and two cultural resource management firms to recover artifacts from archaeological sites before construction.

“Because of federal involvement in the construction of the new I-10 Mobile River Bridge, the National Historic Preservation Act applies,” said Dr. Phil Carr, professor of anthropology and the Chief Calvin McGhee Endowed Professor of Native American Studies at USA. “It requires the protection of significant cultural resources, such as historic buildings and archaeological sites.”

South’s involvement began more than 10 years ago with Phase I, identifying archaeological sites along potential routes for the bridge. Once a specific route was chosen, the next phase included determining which sites were culturally significant. 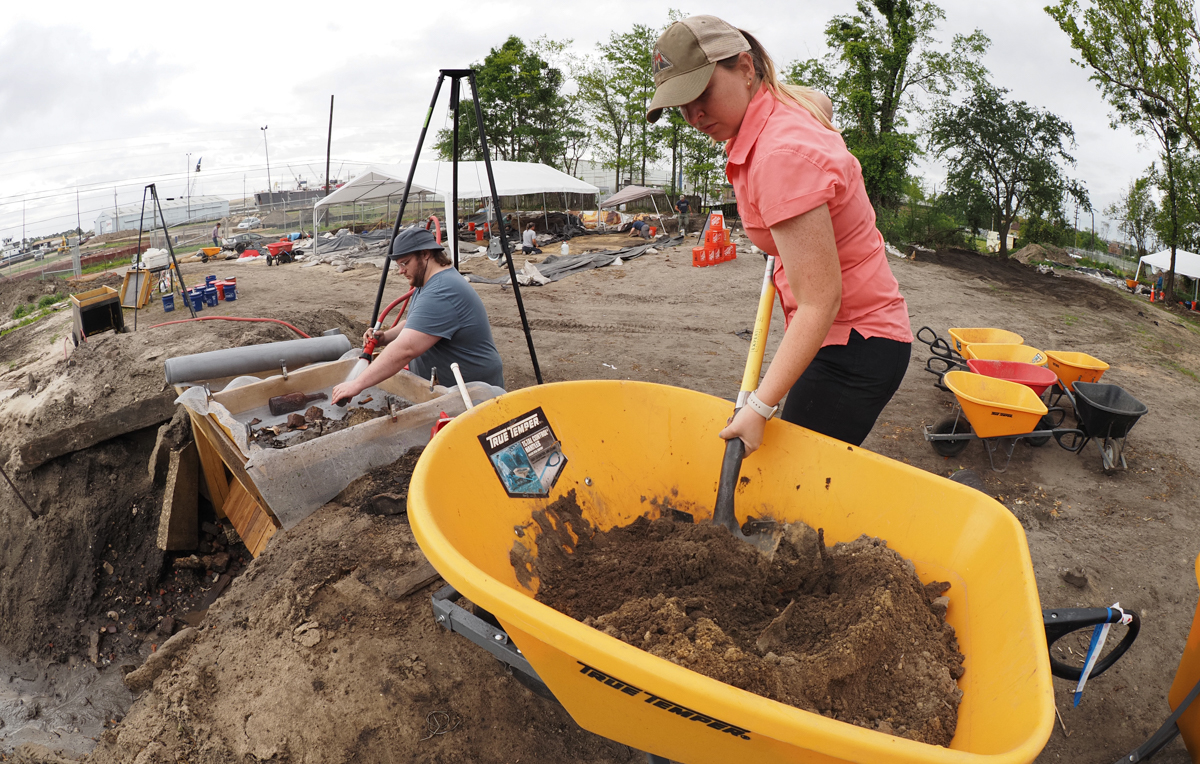 Erin Lister, a South anthropology student, transfers soil excavated from a colonial feature into a water screen for processing.

In Phase II, 15 sites met those requirements. Phase III involves excavating those sites, expected to be completed by January 2023 and recording the information.

The project also involves students, faculty and researchers from a cross section of academic disciplines from programs including African American Studies, anthropology, art, English, geography and history. Students from the Department of Earth Sciences, for example, are using geological reconstruction maps of Mobile Bay comparing past maps to today to determine changes to the shoreline.

“We use Geographic Information Systems software to incorporate the maps and place them, in a digital space, on top of each other,” said Dr. Steve Schultze, associate professor of geography. “Doing so lets us visibly confirm changes over time and to look for any areas of potential interest.”

The 15 sites make this the largest full-scale excavation for USA’s archaeologists, by far. Carr estimates more than 15,000 artifacts have been recovered including ancient Native American stone tools and pottery, as well as the animal and plant remains that tell archaeologists about the diets of native people and early settlers. Other artifacts recovered date back to the 19th century and right up to today. 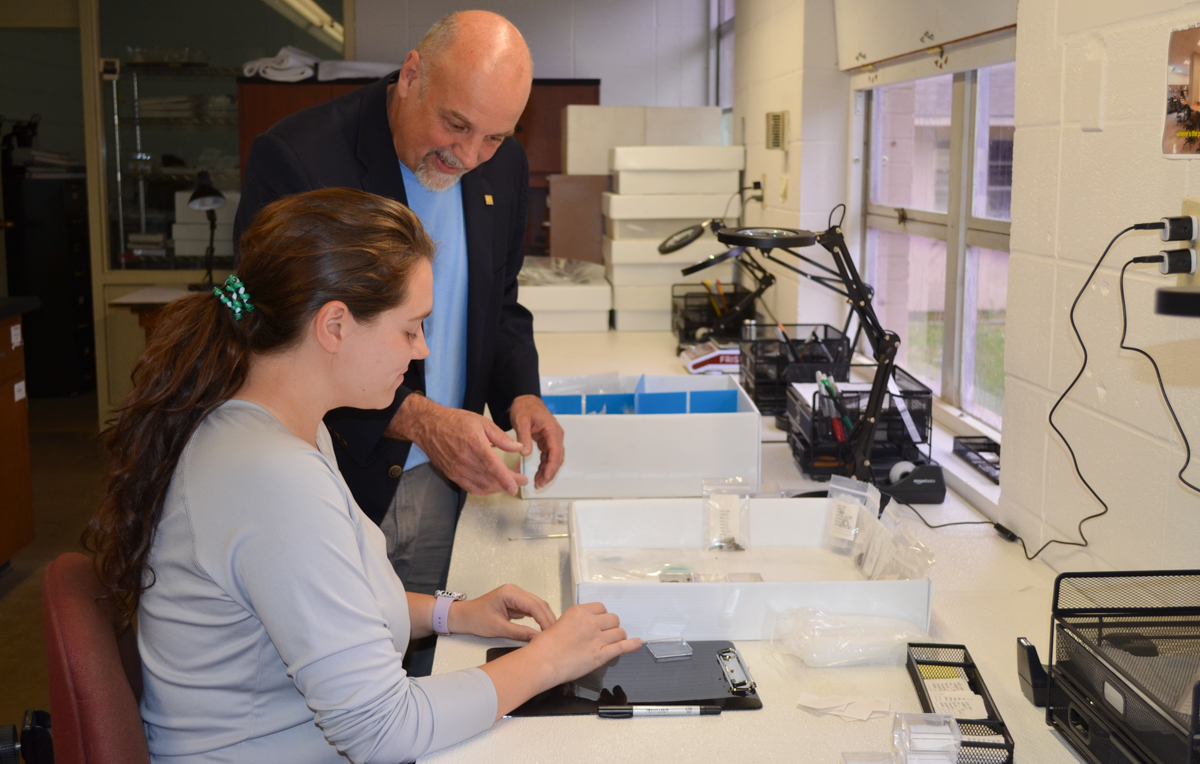 Alisha Palmer, a senior majoring in anthropology, and Dr. Phil Carr, professor of anthropology and the Chief Calvin McGhee Endowed Professor of Native American Studies, catalog artifacts brought in from the Mobile Bay bridge site in a lab at the USA Center for Archaeology Studies.

Once recovered, the work continues back at the lab on South’s campus. Each artifact is processed, cataloged and analyzed. The data generated helps tell the story of what life was like during different time periods of the past.

“This project is allowing us to add to and preserve the rich history of Mobile,” said Alisha Palmer, a senior from Seale, Alabama. “Working in the lab allows me to examine the different artifacts that the crew is collecting in the field. Analyzing these artifacts opens the door into the different time periods that we are excavating at the site.”

Once the artifacts are analyzed and the reports written, then the University will curate them for future study.

“We want to tell the story of ‘the People of Mobile Bay’ and help transport people in the present back to those time periods through our work,” Carr said. “This project is not about recovering cool artifacts from the past, though we will do that. Rather it is about investigating human change, considering who we are today, and contemplating what the future might hold. What does the human past of Mobile Bay tell us about our future?”