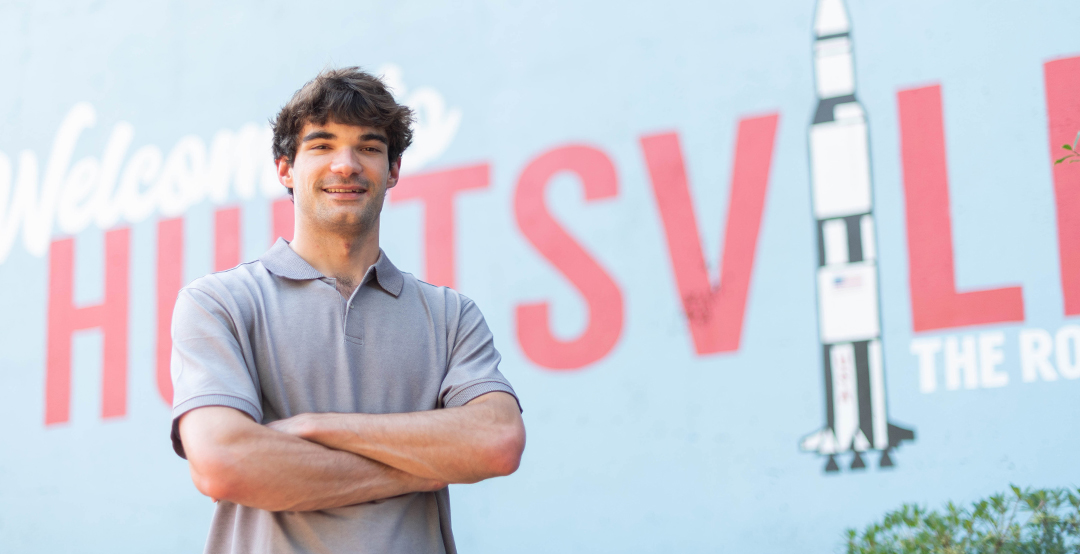 Adam Gautier earned bachelor’s and master’s degrees in computer and information sciences at the University of South Alabama. Before finishing school in May, he was chosen graduate student of the year for the School of Computing.

At the University of South Alabama, Adam Gautier helped fund his education with the Scholarship for Service program offered by the National Science Foundation and the Department of Homeland Security.

Gautier remains a civilian, but he’s one of several thousand government contractors working at the Redstone Arsenal.

“There’s a lot of smart people here,” he said. “And more rocket puns than you can imagine.”

Huntsville, the home of NASA and the Marshall Space Flight Center, is known as the Rocket City. Generations of Alabama children have passed through Space Camp. Local businesses sell rocket-themed Christmas ornaments and craft beers named for astronauts.

Gautier, a 24-year-old from Ocean Springs, Miss., grew up with an interest in science and computers.

“When I was 5 or 6 — really little — I had a laptop, my dad’s old one,” he said. “We have a family picture of me with it. I think it was a Fujitsu and the track pad was nothing like what we have now.”

Gautier’s father is an oil field consultant who has traveled all over the world. His mother is a homemaker. He’s the first member of his family to graduate from college.

Even in elementary school, his tech skills came in handy.

“In the fifth grade, I would go around helping all the teachers with their computers,” he said. “I was that kid. They would call me out of class to go help them out.”

Now Gautier makes his living testing the defenses of Army computer systems. He’s excited about his security work, even if he can’t talk about it.

“There’s some awesome stuff going on in Huntsville,” he said. “I’m glad to be here. I plan to stay for awhile.”

After spending most of his life along the Gulf Coast, Gautier enjoys the mountains of north Alabama. Huntsville is surrounded by parks and lakes, with Monte Sano looming over the city.

“It’s a huge plus,” he said. “I knew I didn’t want to go to California or the East Coast, because of the cost of living, and there’s a different vibe in Alabama and the Southeast.”

At South, Gautier started college with plans for medical school, but wound up earning bachelor’s and master’s degrees in computer science and computer information sciences. He was vice president for the student chapter of the Association for Computer Machinery. Before finishing school in May, he was chosen graduate student of the year for the School of Computing.

As an undergraduate, he worked at an information desk in the Student Center. He met his wife, Christiana, at the Delta Deli near Azalea Hall. They loved to take walks near campus at Langan Park.

Now they rent a house in Madison, a small city east of Huntsville. They’ve begun to explore local hiking trails and waterfalls. For cool evenings, they bought a chiminea for the back porch.

During his final year of graduate school, Gautier did an internship at the Aviation & Missile Center in Huntsville. Now he’s working full-time, though much of that is at home, due to the coronavirus pandemic.

At the Redstone Arsenal, he’s part of a computer group that does red team versus blue team security exercises. There’s a lot of problem solving and strategic thinking. Some times he’s attacking systems, while other times he’s defending them.

This kind of competition builds camaraderie. He enjoys being part of a team.

“It’s a close-knit community,” Gautier said. “I like it a lot. That’s what made me want to come work here after my internship.”