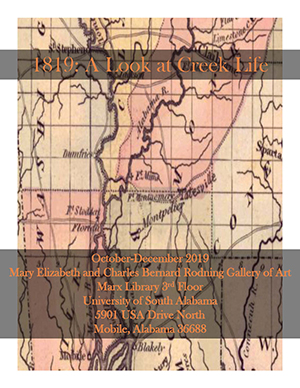 “1819: A Look at Creek Life” focuses on the social, political, environmental, and economic adaptations that defined the Creek Nation in the early 19th century and the years leading up to Alabama’s statehood.

This exhibit is the final installment of a series of temporary exhibits at the University of South Alabama Marx Library for the Alabama Bicentennial. As Alabama approaches its Bicentennial this year, it is imperative for all Alabamians to consider the conflicts, bloodshed, and sweeping laws that ultimately caused the Creek Nation to lose their traditional lands to the United States government. This exhibit explores the effects of Alabama’s statehood through the lens of a particular Creek family and captures the story of a thriving community known as Tensaw that formed in this complex era.