Start Your Timer: The Three-Minute Thesis 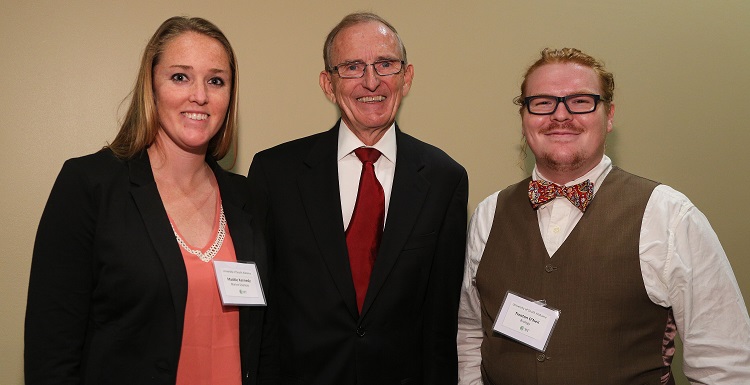 Kennedy’s presented results of research on “Impacts of Wintering Redhead Ducks (Athya Americana) on Shoal grass (Halodule wrightii). Her mentor for the project was Dr. Kenneth Heck, professor of marine sciences and chair of the Dauphin Island Sea Lab.

Trenton O’Neal, a biology major, was runner-up and recipient of the Peoples’ Choice Award, selected by audience voting. O’Neal’s research was “Identification and Characterization of Bacterial Genes Utilized in Triclosan Degradation.” His mentor was Dr. Sinead M. Ni Chadhain, professor of biology.

The 3MT®, which stands for “three-minute thesis,” is growing in popularity at universities in the United States and internationally. Established in 2008 by the University of Queensland in Australia, the 3MT® is a research communication competition. The exercise challenges graduate students to present a compelling oration on their thesis topic and its significance in only three minutes. To be successful in the competition, the students must consolidate their ideas and research discoveries so they can be presented concisely to a non-specialist audience. At every level of the competition, each competitor is assessed on the audience’s comprehension of the material presented and engagement with the presenter.

3MT® Competition was sponsored by the Faculty Development Council and the Graduate School.

While prior research has established that waterfowl can control the distribution and abundance of seagrasses in other regions, less is known about their effects in the northern Gulf of Mexico.

For her research project, Kennedy took seagrass biomass samples five times throughout the year – before, during and following seagrass grazing, as well as during peak seagrass reproduction and growth – to quantify variation in grazing effects on seagrass biomass. Time-lapse photography provided estimates of the birds’ abundance and feeding activities, and waterfowl gut contents were examined to determine the amount of seagrass consumed.

Kennedy’s research to date shows that redhead ducks actively and regularly fed in all the experimental areas for extended periods of time, with as many as 100 percent feeding at any given time. As a result, a majority of collected ducks contained seagrass in their digestive tracts.

Kennedy’s research indicated that shoalgrass biomass increased at locations where the ducks grazed more frequently, suggesting that their grazing had a stimulatory effect on seagrass biomass.

For his research project, O’Neal focused on triclosan, antimicrobial found in a variety of household items, ranging from soaps and toothpastes, to cleaning agents and medical instruments. Research has indicated that absorption of triclosan through these products and contaminated drinking water supplies may lead to negative effects, such as hormonal disruption. His goals were to isolate triclosan degrading bacteria and then identify and characterize the genes encoding triclosan degradation.