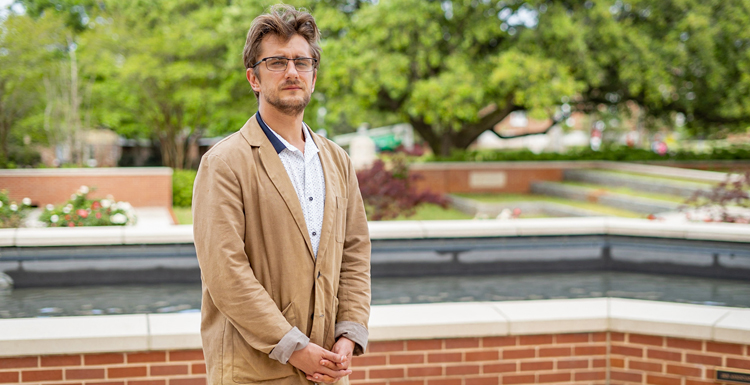 Dr. Anton Svynarenko, a visiting assistant professor of Russian in the Department of Modern and Classical Languages and Literature at the University of South Alabama is from Kharkiv, Ukraine, a city left heavily damaged by the Russian invasion. He says, having the support of faculty, staff and students during this very difficult time has been encouraging.

Dr. Anton Svynarenko, a visiting assistant professor of Russian in the Department of Modern and Classical Languages and Literature at the University of South Alabama, said the Russian invasion of his native Ukraine is a jarring reality “that for me, and for everyone I know, took quite a while to accept and wrap our minds around.”

“It just seemed so improbable and unrealistic,” he said. “And we are all trying to somehow live with it. I understand that I am in a very privileged and very fortunate position compared to pretty much everyone I know at home. So, all of this is to say, I'm not complaining, but it is very distressing and anxiety inducing.”

“From the first interview, I knew that I wanted to work at South,” said Svynarenko, whose hometown is Kharkiv, Ukraine, a city left heavily damaged by the Russian invasion. “Having the support of faculty, staff and students during this very difficult time has been encouraging.”

Svynarenko earned a bachelor’s degree in philology and master’s degree in applied linguistics from Kharkiv National University. He earned a Ph.D. in Slavic studies in 2021 from the University of Illinois at Chicago. Svynarenko’s dissertation was titled “Queer Childhood in Russian Modernism,” and he continues to work on a book about this subject.

“I’m very much invested in the aesthetics of childhood of childishness and child-likeness and how that was utilized in Russian modernism in the 1920s and 30s, when a lot of writers wanted to write like children,”  Svynarenko said. “Writers wanted to learn literary craft from the innocence of childhood. At the same time, I am also looking at unarticulated forms of love that child characters experienced before they have distinct sexual identities. I am examining the nebulous feelings that these characters express and how they correlate with the static aspects of childishness and queerness.”

During his time in Chicago, Svynarenko translated, proofread and copyedited several publications and completed a teaching assistantship through courses titled “Dante's Divine Comedy,” “Lithuanian Culture,” and “The Byzantine Empire.”

Svynarenko has worked with several translation agencies throughout the years and collaborated with film festivals and film distribution companies. He also worked with magazines and literary journals with academic and non academic publications, most frequently with texts related to cultural matters.

Svynarenko loved the general idea of combining research and teaching, and he accepted his first teaching position at Macalester College in Minnesota in the Department of Russian Studies. Since his time at South, Svynarenko was invited to give a talk titled “Queer Children in Russian Modernism” at the University of Southern California.

At the beginning of the war, South students, faculty, staff and community members gathered at the Mitchell Center for a Vigil for Peace. The event was sponsored by the USA Office of Immigration and International Admissions and featured Svynarenko, who shared a poem titled “Where Are You Coming From?” by Ukrainian poet Serhiy Zhadan.

The University later hosted a panel discussion on the Russian invasion of Ukraine. The event, sponsored by Phi Sigma Iota, the honor society for modern languages, featured Svynarenko and Dr. Mara Kozelsky, a professor of Russian and Eastern European history. Dr. Zoya Khan, associate professor of Spanish, planned the event with modern and classical languages and literature students Connor Alford and Sophia Sloan. More than 80 people attended with standing room only.

Kozelsky gave a historical overview of the events that had led up to the invasion, and Svynarenko detailed the invasion and analyzed the publicly stated reasons for the invasion outlined by Russian President Vladimir Putin. The panel then answered questions from the moderator and audience.

Another panel discussion is being planned for fall semester.

“The University of South Alabama is fortunate to have Dr. Svynarenko in our faculty,” Kozelsky said. “His research is groundbreaking and speaks to the freedom of intellectual inquiry inherent to Ukraine and the United States, but no longer possible in Russia. His courses in Russian language and culture offers our students skills that are skyrocketing in demand and critical for national security. Dr. Svynarenko's research expertise, excellent teaching, and firsthand experience with Russia and Ukraine, makes him an invaluable member of our University community.”

Svynarenko said he feels helpless watching the news about his home country and hoped these events would be a gesture of solidarity.

“My hometown of Kharkiv is in the northeastern region of Ukraine, which is very close, unfortunately, to the Russian border,” Svynarenko said. “And my hometown was among the first cities that took a hit when Russia invaded.”

Svynarenko has not been able to visit his hometown since February 2020, before international travel restrictions due to the coronavirus pandemic.

“Fortunately, and thankfully, all my family members and closest friends are not there anymore,” Svynarenko said. “My mom lives in Poland, and she has been there for years for work. I really count my blessings every time I bring it up that she’s not there anymore. Most of my relatives and friends have managed to flee to escape somewhere within the country. They're either in western Ukraine, where it's relatively safe for now, knock on wood, or if they could, they went abroad. But as you may know, men under 60 are not allowed to leave the country. All my male friends and relatives have to stay in Ukraine. They are helping by volunteering in Western Ukraine away from the battlefields.”