Graduate Travis Merrigan's Return to Science and the Evolution of Grayl 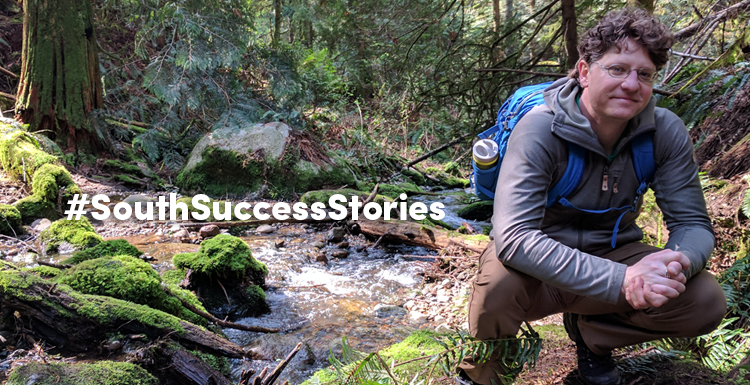 Travis Merrigan, a 2000 chemistry graduate, has always had a side project. One turned into Grayl, a water filter and purifier bottle now sold in 250 stores in the United States. Photo courtesy of Travis Merrigan.

Along the way, he traveled the world and got violently ill. Sometimes traveling the world will do that.

The result: Grayl, a portable water filter and purifier.

Merrigan’s travels influenced the creation of the Grayl bottle, today sold in 250 U.S. stores and internationally. But his journey began at South as a red-shirted baseball player out of Nebraska. A torn ligament in his throwing elbow ended his playing career before it began.

“I got hurt before the season started and never pitched in a game,” Merrigan said. While disappointing, the injury may have changed the course of his life. “It was an opportunity, really, to try other things. That’s what enabled me to study abroad and learn Spanish, and to spend those hours in the lab and learn to love science.”

Those hours in a lab were under the direction of Dr. James Davis, chemistry professor. What fueled Merrigan’s later drive in founding Grayl was on display in Davis’s lab.

“He had a natural curiosity about how and why things work the way they do. He was never afraid to ask questions, and he wasn't afraid of hard work,” Davis recalled. “He was also always willing to believe in the value of the work that he did, and he was always interested in seeking out answers to questions that were of practical importance.”

Before graduating with a chemistry degree in 2000, Merrigan traveled overseas several times, including to Guatemala and to Mexico for study abroad. When traveling to developing countries, people think about all the items they need to pack, Merrigan said. But they usually don’t plan for clean water, so they rely on bottled water after arriving. “Travelers leave a trail of plastic breadcrumbs across the continent, which is expensive and wasteful,” Merrigan said. “That was my first, ‘huh.’”

Merrigan’s next stop was in San Francisco, where he landed a job at a bio-chemical lab. He quickly realized the job, and that type of science, was not for him.

“I learned that while I’m really interested in science — science is fascinating and important — laboratory science, doing experiments over and over to move science along, I was no good at that,” he said.

So Merrigan left the lab, and before graduate school in Chicago, ventured on a seven-month trip to South America. The experience changed his life, and turned his stomach.

Particularly there was the time in Florianópolis, Brazil. Merrigan pointed out that it’s hard, if not impossible, to track the exact cause of a stomach sickness. The result, however, was undeniable: “I kept moving from the shower, to the toilet, to the bed. More than once, I woke up on the floor of the bathroom.” Merrigan said he didn’t leave the room for 48 hours, didn’t eat for three days and didn’t enjoy a full meal for a week.

“You just kind of survive it and come out the other side,” he said. “It’s a terrible weight-loss program.”

While the trip was another precursor to Grayl, it would be nearly a decade before development. After South America, Merrigan got his masters with focuses on international relations and political science and bounced around in jobs in college admissions, marketing and non-profits.

Slowly, beginning in 2011, Merrigan and co-founder Nancie Weston began developing what would become Grayl. He sped up the process in 2013, and within a period of one week, “I quit my job, got married to my lovely wife Erika, moved to Seattle and started full-time with Grayl.”

In Grayl, all of Merrigan’s skills, experience and knowledge, from his time at South on, came together — science, marketing, communications and international travel.

In the first year, Merrigan said, Grayl’s sales were shy of $200,000. Now the chief operating officer, Merrigan describes Grayl’s revenue trajectory as “up and to the right.” There is heavy competition in the water treatment market, Merrigan said, and the company does not publicly release current sales figures.

For now, Merrigan is comfortable with Grayl’s status — “still not the biggest, but our competitors know who we are” — as the company continues to develop its niche. Grayl is sold on the company’s website and through retailers, including Pacific Northwest-based REI. In Mobile, Grayl can be found at Red Beard’s Outfitter on Old Shell Road. The product retails for $59.50.

He said Grayl stands out for two reasons: Its one-press design that pushes water through the cartridge, and its use as both a filter and purifier. The product is promoted as making “clean, purified drinking water (in less than 15 seconds) from virtually any fresh water source in the world.”

The customer base breaks down into three segments: outdoor adventurers, international travelers and those interested in emergency preparedness. Sales are dominant in outdoor adventure, but Merrigan said there is untapped potential in the international travel sector. Grayl buyers are those who appreciate the design while wanting a product that can treat the spectrum of viruses and bacteria.

“So that is our customer,” he said. “An adventurer who travels light and demands a lot from their gear."

Or, someone who doesn’t want to be alone, hugging a toilet in Brazil.