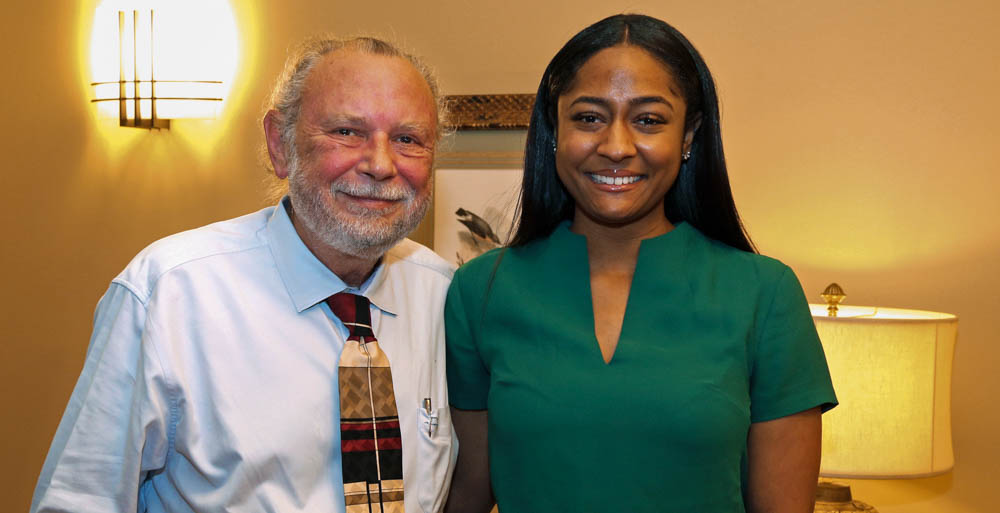 Kourtney McCollum is the first recipient of the Hansen and Aucoin Journalism Scholarship. McCollum is congratulated by Dr. Jim Aucoin.

The University of South Alabama department of communication in the College of Arts and Sciences has announced Kourtney McCollum as the first recipient of the Peggy Hansen and Jim Aucoin Journalism Scholarship.

The Hansen and Aucoin Journalism Scholarship was established in 2017 to honor an exceptional journalism major who has demonstrated a passion and commitment to journalistic integrity.

It is in recognition of Dr. James Aucoin, department chair, and his late wife, Dr. Peggy Hansen.  “Peggy strongly believed in the importance of higher education,” Aucoin said.

Kourtney McCollum, a junior communication major concentrating in multimedia journalism, is the first recipient of the $1,200 scholarship award.

McCollum received the award based on faculty and professional recommendations and overall academic success, including a minimum grade-point average of 3.0, along with displaying a commitment to journalism, leadership, and community and campus involvement.

“To become a journalist, I plan to never give up,” McCollum said. “Being that journalism is a competitive field, the drive, perseverance and dedication I possess insists that I have the qualifications to ensure that this once-known hobby will manifest into a successful career for me.”

She is actively involved on campus as a member of Alpha Kappa Alpha Sorority, African American Student Association, Phi Eta Sigma Honor Society and the Abeneefoo Kuo Honor Society. Additionally, McCollum works as a proctor and student assistant on campus in the Office of Student Disability Services.

One of McCollum’s career goals is “to be an advocate for those who feel unheard, especially those in third-world countries where it is not so easy to speak out about sensitive or important issues.”

McCollum praised the faculty within the department for encouraging her to pursue a journalism career.

“The University of South Alabama has played a major part in my decision to fully pursue journalism,” McCollum noted. “The faculty within the communication department have inspired and encouraged me into believing that I could turn my passion into a career.”

Hansen, a graduate of the College of Nursing at the University of Missouri and the University of Health Sciences in Antigua, was a senior consultant with TruBridge in Mobile, working with physicians to train them to use electronic health records.

Aucoin, a journalist and professor, has served on the faculty of the department of communication for 24 years and as chair for nine. In his 18-year journalism career, he worked as a reporter, writer, copy editor, editor and designer for various print publications, from weekly newspapers to dailies and magazines.

The Peggy Hansen and Jim Aucoin Journalism Scholarship is open to full-time students enrolled at USA majoring in journalism. For more information, contact the USA Department of Communication at (251) 380-2800.