Lessons in English, German and Tolerance 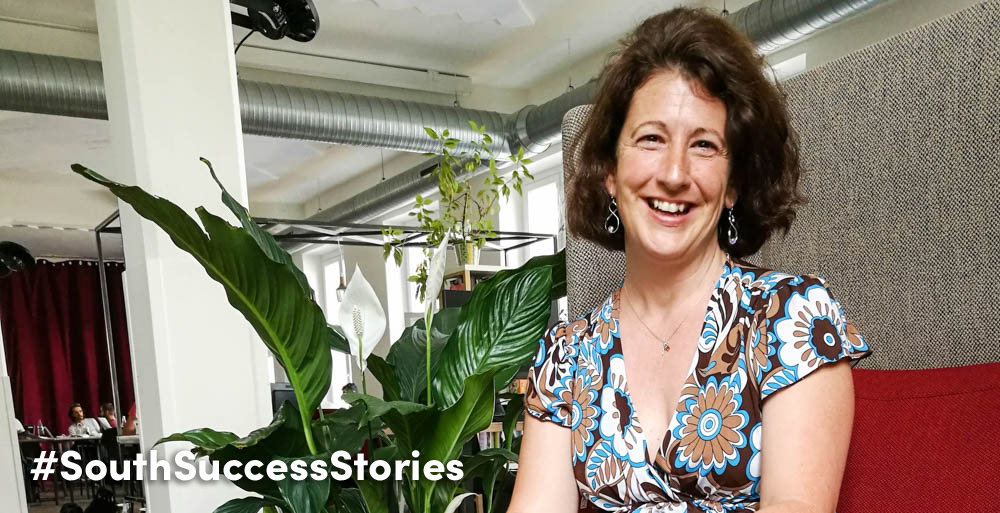 Dana Faye Housch came home — even though she didn’t realize it at the time — to Dresden, Germany, in February 2009. That was two months after she graduated from the University of South Alabama with a major in German. Today, she helps refugees from troubled countries feel at home there, too.

Housch (rhymes with “push”) became captivated by Dresden while still at South. The city has long been one of Europe’s beauties, renowned for its architecture and culture. It stands along the River Elbe in eastern Germany, a few miles from the Czech border. Housch didn’t even know where to find it on a map before spending two months there for a summer German language program at the Goethe-Institut.

After graduation, she moved back, even though she had no job and had to live in a youth hostel at first. “I love Dresden,” she said. “It’s full of beer gardens. People take their blankets out and lie on the grass by the river and have beer and barbecue. The kids are running around playing, and the dogs. Makes you want to stay awhile.”

Maybe she comes by that feeling genetically. She knew her heritage was German, but genealogical research last year surprised her with the revelation that her family actually came from Dresden. Her Housch forebears left the city seven generations ago. “They went to a town called Biedenkopf, which is near Frankfurt,” she said. “And then from there some of them sailed the ocean blue and went to the U.S.”

Housch has loved her ancestral language since she was a child. “You can build anything you want in German,” she said. “They say that when you learn a language, you learn a culture, and that’s definitely true. In German, you can take seven words and just smush them together, make a new word, and ta-da! Everyone understands. That’s how the culture works, too. They’re definitely engineers, and they like to build things, make things complicated.”

Dresden has not always returned Housch’s affection. She scraped together a living as an English teacher for five years at various schools before striking out on her own in 2014. Housch also earned a business degree from South, but drumming up business has presented unique challenges. From 1949 until the fall of the Berlin Wall in 1989 and German reunification the following year, it lay deep inside the repressive, isolated communist nation of East Germany.

Because, she responded, you’ll have more fun on vacation. Across most of Europe, English serves as a common second language. “If you go to Prague on holiday,” Housch told the skeptics, “then you need to speak English, because they don’t speak German. So you need at least a little bit of English for your holidays.’”

Did that sales pitch work? “Yeah,” she said with a laugh. “You’ve got to start somewhere.”

Housch grew up in Alabama, Mississippi and Texas. She heard good things about the University of South Alabama as a teenager living in nearby Daphne. So that’s where she put herself through college, working 40 or more hours a week as she studied German and Spanish.

“I have very fond memories of her,” said Dr. Zoya Khan, associate professor of Spanish at South. “She was a strong student — hardworking, sincere, earnest. And she has done so much. I follow her on Facebook, and I love reading about her experiences.”

Those experiences have sometimes been challenging, even harrowing. Many Germans still resent the British-American bombing of Dresden late in World War II. A firestorm destroyed the city’s historic core of baroque buildings and killed some 25,000 people. Even today, construction projects unearth unexploded bombs.

Immigrants have trickled in, some from distressed areas of Africa, Asia and the Middle East. The city has received them uneasily. Visiting the Foreigners’ Office, “I’ve had my passport thrown at me,” Housch said. “I’ve been yelled at and told, ‘Wir sprechen Deutsch in Deutschland!’ — ‘We speak German in Germany!’” Of course, she does speak German, so she laughed about it. Most of the time, she treated those outbursts with amused resignation.

Pegida (puh-GEE-duh, with a hard “g” as in “golf”) is a nationalist organization that advocates restrictions on immigration, particularly Islamic immigration. “Pegida” is an acronym; the full name translates as Patriotic Europeans Against the Islamization of the West. Nearly every Monday night since October 20, 2014, hundreds or even thousands of Pegida members and sympathizers have marched through Dresden’s streets, shouting slogans and clashing, sometimes physically, with counterdemonstrators.

“In the beginning, it made the hair on the back of my neck stand up,” Housch said. “I understand that they hate me. I’m an American; Dresden was bombed. But these guys from Eritrea and Afghanistan and Pakistan and all of these countries which have conflict right now, I thought the people of Dresden should be more understanding because a lot of them were refugees themselves. A lot of them left Dresden when the wall fell because they were afraid they wouldn’t have that chance again. Then five or 10 years after that, they came back.”

On the other hand, “I kind of get it, too,” she said. “They lived behind a wall until 1989. They didn’t see anybody with a different skin color, someone who spoke a different language. A lot of them lost their jobs that they had when the wall fell because the companies that they worked for weren’t competitive in a world market. Some of them weren’t able to get back into the job market simply because of their age.”

Sympathetic or not, she felt compelled to push back against the marchers’ xenophobia. She joined an informal group that organized dinners and parties for refugees on Monday nights. That was fun but seemed inadequate. She asked the refugees, “What do you really need?” They all said, “German lessons.”

So Housch founded a nonprofit organization called German Lessons for Refugees. She and the other teachers are unpaid volunteers. Three years later, it’s still going strong. Learning the language allows refugees to assimilate into German society and demonstrate that everyone is pretty much the same the world over. “My goal is just to make it very noticeable what we all have in common,” Housch said. “I hope that in 20 years I don’t have a job.”

A current South student, Sonya Smith, has received a national scholarship from Phi Sigma Iota International Foreign Language Honor Society. As Housch did, Smith is studying Spanish and German. Khan contacted Housch and arranged that the scholarship cover a spring 2019 internship in Dresden with German Lessons for Refugees.

“She’s really making a positive contribution to the world,” Khan said of her former student, “the kind of contribution that we need, which is to make life better for people who are running from complete disasters.”

None of the turmoil has diminished Housch’s love for Dresden. “This is my home, definitely,” she said. “I’m not leaving.”

She persists in trying to connect with everybody she can, even those who view her with suspicion because of her American accent or her sympathy for those fleeing chaos in their native countries.