With Changing Views, a New Banner 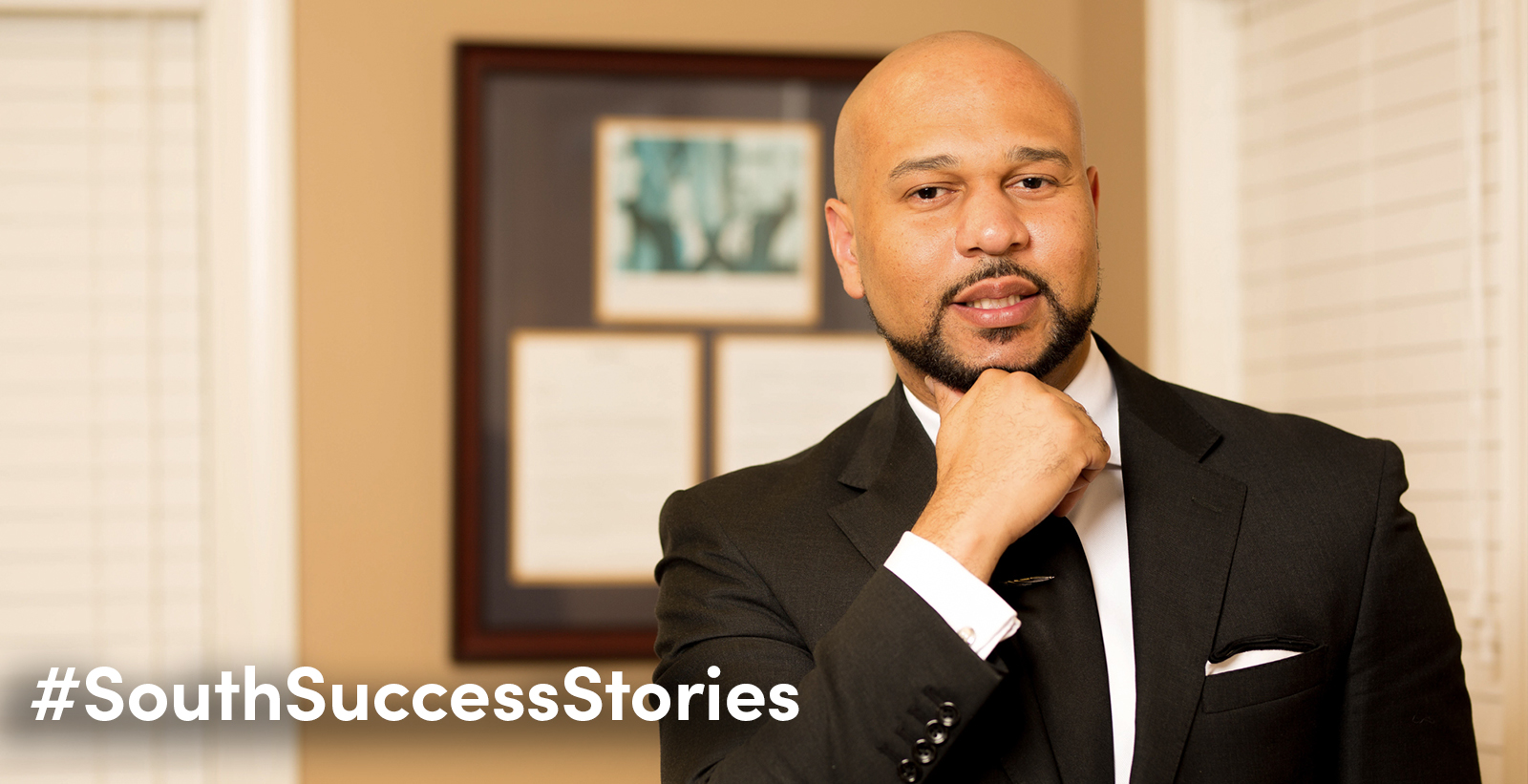 Carlos Moore, a municipal judge and attorney in Mississippi, is the first president of the USA Black Alumni Society. Photo courtesy of Carlos Moore.

In 2017, after Carlos Moore was sworn in as municipal judge of Clarksdale, Miss., he removed the state flag from his courtroom.

“That was my first order of business,” he said. “It was a big to-do for a black judge to take it down.”

Moore’s move made national news. So did the death threats he received.

The 1999 graduate of the University of South Alabama argued that if he found the Confederate symbol on the flag offensive, then other black people in his community would, too. He took the lead in his courtroom. In the rest of the state, there was not enough support to remove the flag.

Three years later, after a summer of Black Lives Matter protests that have reshaped the nation, Moore saw change come to Mississippi.

Wal-Mart announced it would no longer sell the state flag. The NCAA said that Mississippi could no longer host post-season sports under the battle symbol. And the state finally decided it would pull down the flag after 126 years and repeated challenges to its embedded emblem.

On July 1, Moore traveled to the state capitol and watched history unfurl.

“I felt a chill come down my neck and spine,” he said in a Mississippi podcast. “It was like dreams do come true.”

The next week, Moore and his wife and daughter celebrated current events on a family vacation at a Florida beach. A Mississippi commission, meanwhile, is considering new flag designs that might include stars, a magnolia tree and “In God We Trust.”

Moore laughs and says he has no preference for what symbol of the state is chosen.

“They could put sweet tea on the flag for all I care,” he joked. “So long as it’s not the Confederate flag.”

Moore, 43, grew up in Moss Point, Miss., where his mother worked for the Port Authority and his father was a welder at the Ingalls Shipyard. He earned a scholarship to the University of South Alabama and planned to study medicine. An interest in politics, though, carried him to law school at Florida State and then a legal career in northern Mississippi.

At South, he studied political science, served in student government and worked with Jaguar Productions. Dr. Nola Allen, chair of the political science department, became one of his mentors.

In 2018, Moore became the first president of the Black Alumni Society. Another leadership position. A connection to the past, and a link to the future.

“I think there has been a disconnect for a lot of us,” he said. “It was a way to get us back involved on campus and working with students.”

In Mississippi, Moore works as a judge in Clarksdale and Grenada, where he lives. His legal practice is now part of a national organization, the Cochran Firm. He’s been active with the National Bar Association, serving as an officer and board member, and is now running for president of the legal group.

His political plans include running for Congress or the State Senate. Moore says he would never challenge an incumbent in his district, but one of his representatives is 88 years old. Time is on his side.

Moore is still amazed by the remarkable change this year in American attitudes over racial injustice and police reform.

It began with the video of Minneapolis policeman kneeling on George Floyd’s neck for 8 minutes and 46 seconds. In the middle of a coronavirus pandemic, millions of people had time to consider and reconsider what happened and what has been happening across the country.

“I think COVID played its part,” he said. “It slowed everything down and tuned in people. People were just glued to the TV.”

The words “Black Lives Matter” are now seen on street murals and heard from people of all races across the country.

Moore said he is representing a man in a police brutality lawsuit right now in Birmingham. During depositions, he asked officers if they had ever used the “Black Lives Matter” expression.

“Usually, that would set people off, and lawyers would object, but now they say it so easily,” he said. “It’s gone from a despised slogan to a beloved refrain.”

He considers that progress, but believes there is far more work to be done. Day-to-day concerns in Mississippi include economic opportunity and health disparities for African Americans. As a symbol and statement, he’d like to see Juneteenth, the Black emancipation celebration, become a national holiday.

Moore doesn’t mind campaigning on issues that are not yet popular. Who knows when things will change? The state flag controversy helped teach him that lesson of leadership.

“My place is always at the front of the line,” Moore said. “That’s something my mother always taught me.”