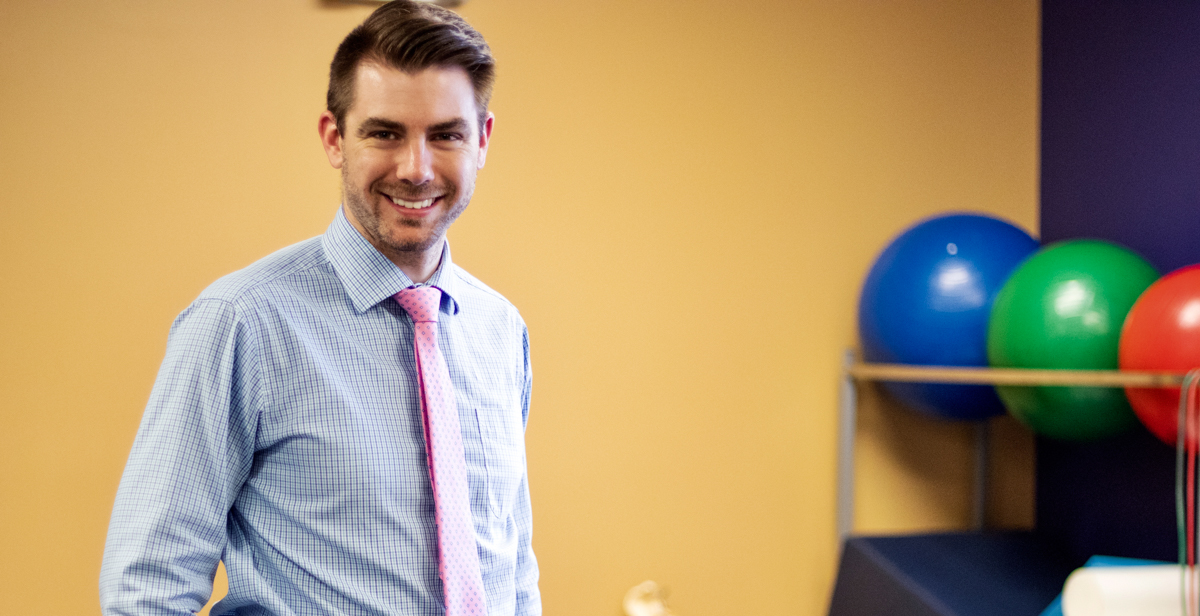 Russell Standridge, a physical therapist in Decatur, Ala., said he gets satisfaction from seeing his patients improve. His clients arrive having faced a variety of medical challenges, from surgeries to athletic injuries to automobile wrecks to neurological disorders.

Most physical therapy students start clinical rotations at the beginning of their third year. Russell Standridge started working one-on-one with a physical therapist his second week in the program, but it’s not what he had planned.

Standridge broke his ankle playing soccer, so just days into his classes in the University of South Alabama Pat Capps Covey College of Allied Health Professions, he got experience on what it was like to be on the patient side of care. And, as it turns out, his therapist was one of his professors.

His recovery was a lesson in empathy that he carries with him today as a physical therapist at Results Physiotherapy in Decatur, Ala., where he has been working since May.

Just as he saw his own care progress, Standridge said he gets satisfaction from seeing his patients improve. Working at an outpatient facility, Standridge said that his clients arrive having faced a variety of medical challenges: from surgeries to athletic injuries to automobile wrecks to neurological disorders, including Parkinson's disease and stroke.

Recruiters began reaching out during Standridge’s third year in physical therapy school. Medical professionals are in demand, and for physical therapy jobs, that means a projected increase in employment of 28 percent by 2026, according to the U.S. Bureau of Labor Statistics. The mean annual wage in 2018 was $87,930.

Standridge’s arrival in Decatur takes him full circle. He grew up 30 minutes down the road in Danville, attended undergraduate school in Birmingham, and graduate school back in north Alabama before enrolling in PT school at South. “It seems like I was touring as much as I could while keeping in-state tuition,” he joked.

His wife is also in the medical field. She worked as a nurse at USA Health Children’s & Women’s Hospital while Standridge attended USA, and now is at a hospital in Birmingham.

Standridge said he considered going to medical school. At the same time, he played basketball and golf in high school and enjoyed the strength and conditioning aspect of sport. Physical therapy seemed liked a “perfect mix,” he said, a marriage of the two.

At South, he continued his focus on strength and conditioning – and got experience working with clients – as a personal trainer at the Student Recreation Center.

Standridge’s PT training, including soft skills in patient interaction, continues at Results Physiotherapy. One reason he was attracted to Results, Standridge said, was that the company provides professional development and continuing education that goes beyond state requirements.

This time, though, he’s hoping the lessons do not involve breaking another ankle.