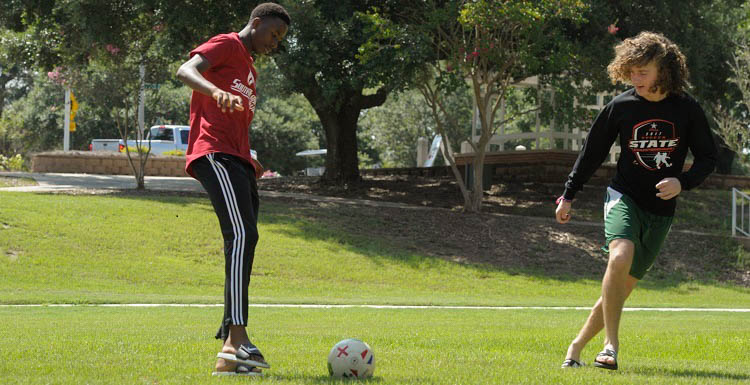 Ismael Khouma, left, and Nate Carr, are freshmen roommates in the newly created International House, a living community at South for students interested in global engagement.

Until a few days ago, Nate Carr and Ismael Khouma didn’t know each other. And that’s understandable. Nate is from Mobile and Ismael is from Senegal in Africa.

But then along came the International House, and now these two University of South Alabama freshmen are roommates and friends. They are also pioneers.

This fall, South launched the International House inside the Beta 1 residence hall, and some 22 students, mostly freshmen and sophomores, signed up to live there. The goal is to attract and nurture students – both American and international – who have expressed an interest in global engagement. Nate, for instance, dreams of one day being an ambassador in a foreign country.

“In high school, we had a lot of exchange students,” said the graduate of Davidson High School. “We became friends, and I wanted that to continue at South.” He’s especially interested in the Study Abroad programs and international business.

Ismael, who goes by “Ish,” has actually been in the United States since 2014. He graduated from St. Stanislaus, a day and boarding school in Bay St. Louis, Miss., that he attended as an exchange student from his hometown of Dakar, Senegal, which is the westernmost city on the African mainland.

“I want to learn about other cultures,” said the mechanical engineering major, who then gazed across campus from his Beta 1 balcony. “This is definitely a different environment than high school.”

Indeed. A few doors down from Nate and Ish is Thyrza Spierings, from Schijndel in the southern Netherlands. Unlike Nate and Ish, who plan to stay at South to get their degrees, Thyrza (sounds like TEER-zah) is here for the fall semester only. She’s a junior at the NHTV University of Applied Sciences in Breda, Netherlands. NHTV has a leisure studies management exchange program with South.

And as Ish noted that South’s environment is different from his high school, so also it is very different from Thyrza’s college experience in the Netherlands.

“There are no campuses like this in Europe,” she said, sitting outside her room. “Most of the college students there are commuters; they take their classes and then they leave. Here, there is a greater sense of community.”

There are other differences that she said will take getting used to, such as

This is Thyrza’s first time in America and she’s the first in her family to make the trip. “My family thinks this is amazing,” she said. “They’ve encouraged me to see new things and meet new people.”

She’ll have three roommates in the International House, all of them American. “I’m nervous about meeting them, but I think they’ll help me get more comfortable speaking English,” said Thyrza, whose native language is Dutch and who knows a little German and French. She’s hoping that her international experiences will better position her for a career in tourism and event planning.

Nate, Ish, Thryza and other students like them are why Dr. Christine Rinne, director of South’s International Studies Program and coordinator of the Global Engagement Certificate, worked to develop the International House and sees it as a significant component of the University’s global engagement priority.

“This is something we’ve been building toward for a while,” said Rinne, also an associate professor of German, who has drawn on her personal experience as an exchange student 20 years ago at a German university. “The International House can help our students become more aware of the world and spur some important dialogue.”

As students applied to live there, she found that they had a common thread running through them. They are interested in other cultures and interested in international education. Many have already participated in Study Abroad while others want to go. And quite a few see the International House as a perfect venue to master a foreign language.

“The residents will help determine the International House programming, which could include events such as film viewings and discussions, festival celebrations from around the world, guest speakers on current events, and more,” Rinne added. “I expect that, over time, the word will get out that this is a special place to live.”

Just hours after moving in, Nate and Ish discovered a common ground. Both were standouts on their high school’s soccer team. “We’re getting along pretty good,” nodded Ish.

Students or others wanting more information about the International House should contact Rinne at crinne@southalabama.edu or call (251) 460-6746.