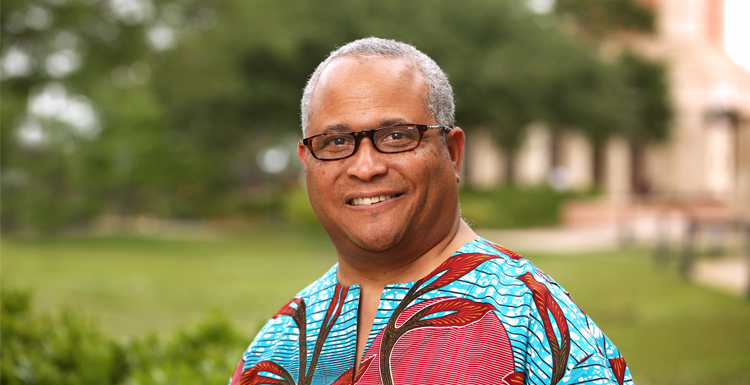 Dr. Kern Jackson, director of the African American Studies Program at the University of South Alabama, served as co-writer and co-producer of “Descendant.”

Dr. Kern Jackson, director of the African American Studies Program at the University of South Alabama, served as co-writer and co-producer of “Descendant,” the Africatown documentary that has won fans and wowed audiences at film festivals across the country.

He appears in the film, too, but those aren’t his favorite scenes.

“What tickles me is seeing storytellers from Africatown, people I knew were first-rate the moment we met, seeing them up on the screen,” said Jackson, who teaches Folklore and Fieldwork in the English department. “Being a scholar with one foot inside the community and one foot outside, is an inherited position in the community. Albert Murray, who was from Africatown and wrote ‘South to a Very Old Place,’ held it long before I showed up on the scene and identified myself as a folklorist.”

The “Descendant” documentary, directed by Mobile native Margaret Brown, won a Special Jury Award for Creative Vision at the 2022 Sundance Film Festival. The film will open Friday on Netflix and in select theaters nationwide. On Saturday, there will be a special Mobile premiere at the Saenger Theatre.

In the spring semester, Jackson said, there are plans to show the documentary on South’s campus.

The film traces the personal stories and community history of Africatown, north of downtown Mobile, which was founded by descendants from the Clotilda, the last known ship to carry enslaved Africans to the United States in 1859, and others of African descent that were already in Mobile County. The remains of the ship were discovered in 2019, during the making of the documentary. The film includes dialogue from “Barracoon,” a manuscript by Zora Neale Hurston, the novelist and anthropologist who interviewed community leaders such as Cudjo Lewis.

Brown, a graduate of Murphy High School, has done documentaries on everything from country music to the BP oil spill. Her films include “The Order of Myths,” about segregated Mardi Gras celebrations in Mobile.

“I think she’s a genius,” Jackson said. “I love storytellers. I love turning the spyglass, as Hurston would say, on the storyteller.”

Brown met Jackson when he worked with her on the Mardi Gras documentary.

“We became very close through the making of that film, and we never stopped talking about all the issues of that film,” she said. “When I got the first chunk of money for ‘Descendant,’ he was my first phone call. He’s already embedded in that community.”

The two of them share a wry sense of humor and a love of coffeehouse conversation.

“I think Kern is irreverent in the same way I am,” Brown said. “He doesn’t suffer fools easily. He’s curious. He’s brilliant. It’s fun to be around people who are smarter than you. He’s an amazing collaborator because he makes you better than you were before you started.”

For more than four years of work on the documentary, they did research, arranged meetings and filmed interviews. They spent months editing scenes and discussing the shape of the story. They reacted to current events in Mobile.

“I always knew the film was more about the community than the ship, but when they found the ship, there was a before and after,” Brown said. “To see what would happen to people in the film – how would they grow or not grow, how would the city respond – all of these things were questions. A documentary film is like a living thing in a way. You sort of see what happens.”

“Descendant” has been invited to be shown at 21 film festivals including the New York Film Festival and Martha’s Vineyard African American Film Festival, where Barack and Michelle Obama promoted the documentary, which is presented by Higher Ground, their production company.

The early success of the film has not surprised Jackson.

“I knew it was going to hit,” he said. “There were too many talented people involved for it not to do well. All of the characters, and even the people who didn’t make it into the film, were so enthusiastic in opening up their homes and sharing their stories with us.

The trailer for the documentary begins and ends with the voice of Emmett Lewis, a sixth-generation descendant of Cudjo Lewis, one of the founders of Africatown.

“From birth, my daddy, he always wanted us to be able to talk to our people, because when you have this type of history, your ancestors are always going to talk to you,” Lewis said. “As a child, I thought the story was sad. Now, I don’t get sad no more. Because we’re still here. My only fear is for my people’s story not to be told.”

Faculty from the University of South Alabama have been exploring the history of Africatown for decades. During the 1980s, for instance, the University hosted a delegation from the West African nation of Benin, where the Clotilda landed and brought 110 enslaved men, women and children back to Mobile.

“I’m in a long tradition of people that includes Jean McIver, the first director of the African American Studies program,” Jackson said. “I’ve got all this support from my colleagues in and outside of my college.

“We don’t know how many descendants (of Africatown) have gone to the University of South Alabama, but we know some of the primary storytellers have. People like Israel Lewis. And some of the folks who have fed off the energy of that narrative, such as Charles Smith, the local potter. And, you know, Dr. Joél Lewis Billingsley is our vice president for diversity and community engagement. She’s the pinnacle of the descendants who’ve matriculated through South.”

A significant development for the film was the 2019 discovery of Clotilda wreckage near Twelve Mile Island in the Mobile Delta. News of this event renewed public interest in an extraordinary page of history from just before the Civil War.

Timothy Meaher, a wealthy Mobile steamboat captain and shipyard owner, was said to have wagered that he could smuggle Africans into the United States, despite an 1807 law that prohibited importation of enslaved people. He outfitted the Clotilda and sent it to West Africa. After the schooner returned to Mobile with its human cargo, it was burned and sunk to conceal evidence of the crime.

The year before discovery of the Clotilda, in 2018, Hurston’s long-lost manuscript for “Barracoon” was rediscovered in an archive at the Moorland-Spingarn Research Center at Howard University. Publication also sparked interest in Cudjo Lewis. For the documentary, quotes from him are voiced by current residents of Africatown.

Jackson still marvels at how so many things came together to help create the documentary.

“Simultaneity, serendipity – whatever you want to call it,” he said. “To bring Cudjo’s voice to the stoops of Africatown, that was just a no-brainer.”

For Jackson, the hardest part of making the film was forcing himself to stop doing field work and recording interviews. One of the biggest threats facing the documentary turned out to be the coronavirus pandemic of 2019.

“With COVID, we didn’t know what it meant those first two or three months,” Jackson said. “That was a real challenge. You didn’t want to kill off the elders you were interviewing.”

In an interview at the Robert Hope Community Center, in the heart of Africatown, Jackson talked about his own family history and its connection with Africatown.

“My involvement in this project started before I was born,” he said. “My people are from Mobile and used to teach on the spot we’re sitting. The land for the Mobile County Training School in the early 20th century was donated by a Clotilda descendant. So, they used their generational wealth to start the first public high school for black people in the state.

“My grandmother taught here. And my auntie, one of the surviving educators and griots who’s still living, taught everybody in the film. I didn’t grow up in Mobile, but we would come out here as children. When I came down to study Mardi Gras, my godmother said, ‘You could do that project, or you could do this much more interesting project over here.’ And when Mrs. Valena McCants tells you to do something, you do it.”

During the 20th century, Africatown was surrounded by heavy industry, including factories owned by the Scott Paper Company and International Paper. After those factories closed, unemployment rose and population dropped. Construction of Interstate 165 and the Cochran-Africatown USA Bridge divided what was left of the neighborhood.

A community museum, the Africatown Heritage House, is scheduled to open this fall. There are also plans for a welcome center.

In work for the documentary, Jackson, 58, found himself retracing his own steps as a researcher. He likes to describe history as a circle. Travel far enough and you’re back where you started.

“I took a video of Miss Lorna Wood watching a video of herself that I had taken 30 years ago,” he said, laughing. “It’s so meta it makes your head hurt.”

Jackson is hard-pressed to name a favorite character or moment in “Descendant.” Too many choices. There’s joy and comedy to go along with drama and sorrow.

“I can’t choose one scene, but when Joycelyn Davis is in this room right here, being filmed, and she’s calling people to tell them the ship has been found,” he said. “She’s making so many calls, and she keeps saying, ‘This is Joycelyn. You know, Joycelyn. Joycelyn from Africatown’ – and then people go, ‘Oh, Joycelyn from Africatown.’ That says something about what the name of the neighborhood means.

“I love her in this film. I love the arc of what she’s done since the film wrapped, and her incredible advocacy for this community. Just tireless passion and energy. You know, I can talk and write about community engagement forever and ever, but all she has to do is say two sentences and you’re there.”