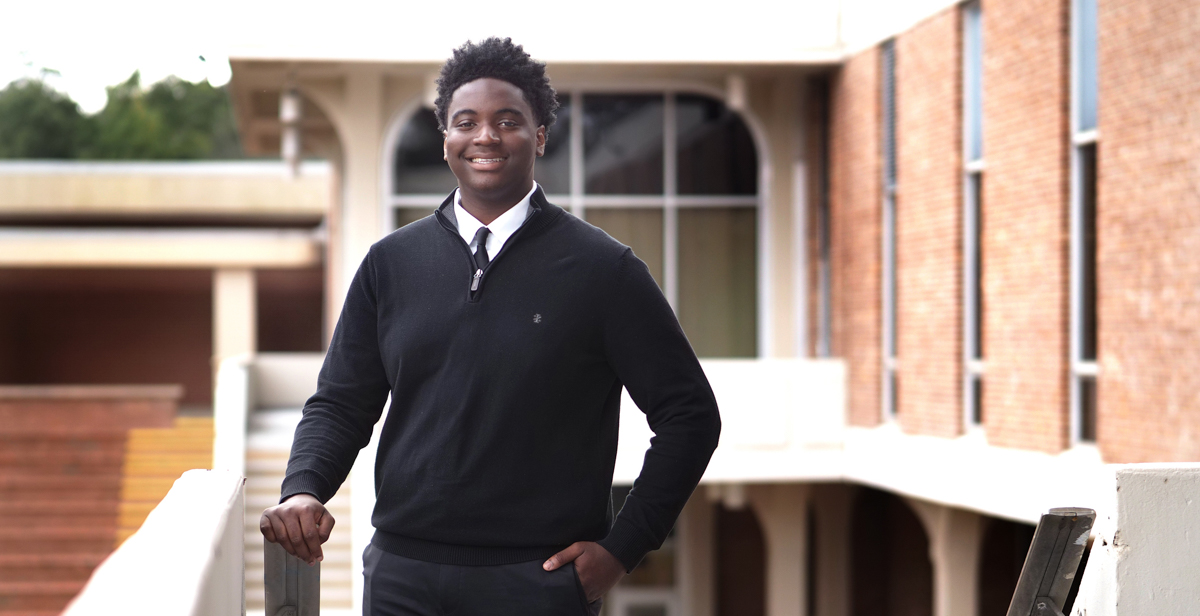 KC Crusoe of Montgomery is the president of the First Year Council at the University of South Alabama.

In the ninth grade, KC Crusoe chose a career in politics.

“In history class, my teacher, Tiwania Brown, had a lesson on local government, learning who your city council representative was, and things like that. She taught us that it’s not just who is elected governor or president. Sometimes it’s the smaller people who make the biggest decisions.”

The path toward public service seemed to make sense for Crusoe, who’s now president of the First Year Council at the University of South Alabama.

At Park Crossing High School in Montgomery, Alabama, he made good grades and belonged to a half-dozen clubs. Everyone knew his name. He made a point of talking with students, staff and faculty.

“You know, teachers are human, too,” he said. “They need someone to talk to, someone to listen to. You know, ‘How was your weekend?’ People need that.”

His mother, Katrina Atkins, works for School Superintendents of Alabama, a nonprofit organization in Montgomery. She and his younger sister now live in Wetumpka, north of the capitol.

After graduation, Crusoe had scholarship offers from several colleges, but found himself drawn to the University of South Alabama.

“I always liked South,” he said. “I don’t know why, but I always did. Maybe it’s Mobile. I went to USA Day and everyone was so nice, everyone wanted to talk. When I came here, I found my people. I’m a South guy.”

You showed up 7 minutes early for this interview. Is that typical?

“I don’t do late. Actually, I am late, because I’m normally 15 minutes early. I think when you get to places early, that’s when you meet the real person, because they’re not in professional mode yet. So I’ve gotten to know a lot of people by being early.”

“I have a dream schedule – all of my classes are from 8 a.m. to 11 a.m. So I have the rest of the day free for organizations and meetings. I’m a morning person. I go to the Rec Center at 5:30 in the morning and then I get back and get ready for class. For math and science, I have to put in the hours, but history and English are pretty easy for me.

“I was always taught to use correct grammar. I even text in complete sentences with punctuation. People ask me, ‘Why do you text like you’re writing a paper?’”

Tell me about your name. KC doesn’t stand for anything, like K.C.?

“My first name is Kistrall, but no one can pronounce that, so I go by KC. It’s just easier. When I go into politics, it’ll be KC Crusoe.”

When you enter politics? That’s a sure thing?

“Yes. I want to become the first black U.S. Senator from the state of Alabama. Unless somebody beats me to it. We’ll see.”

Who are your political favorites or role models?

“Corey Booker of New Jersey. He’s one. I met him on this Spring Break trip with a group called the Dream Initiative. Amazing guy. You know how people are never the same as they seem online or on television? Well, he’s the same person.

“And Raphael Warnock from Georgia. He’s a senator who’s also a pastor.”

You have a church background?

“I was raised in the church. My grandfather is a pastor. He lives in a little town called Minter, south of Selma.”

Growing up, were you a sporty kid, musical kid, or what?

I was an academic kid, for sure. I did sing at school and in the church choir. KC can sing.”

Students can be intimidating by public speaking, but you seem to love it.

What keeps you busy on campus?

“I’m in the Student Government Association and RANSOM, the Radical Athlete and Student Oasis Ministry. I have two jobs on campus. I’m a Jaguar Productions tech and a South Guide. I love talking to people. Having a freshman giving the tour might mean something to the students visiting South.”