One of the most common questions archaeologists are asked is, “how do you know where to dig?” There are many different ways we can find archaeological sites. But what is a site, exactly? An archaeological site is any location that contains evidence of past human activities or behavior. These sites can be as small as a few artifacts or as large as an entire settlement. Archaeologists often categorize sites based on the availability of written records from the period: precontact sites refer to locations of human activity prior to available written records, while historic sites refer to those with documentation. The emergence of writing systems varies throughout the world, but in North America, this has a firm distinction due to European exploration.

Archaeologists typically find sites through one of two methods. Sometimes, we have historic documentation or local knowledge of a specific site and conduct a targeted survey effort to locate it. However, much more frequently, we survey a project area slated for future ground disturbing actions to identify sites that might be impacted. Much of this work derives from the National Preservation Act, which requires federal agencies (and projects using federal money) to consider impacts to historic properties, like archaeological sites. These surveys are essential to identifying sites prior to development, like building a highway. This is the case with our current work on the I-10 Mobile River Bridge Archaeology Project.

Prior to conducting a survey, archaeologists conduct background research to understand the project area. These include historical documents, topographic maps, oral histories, environmental factors, and previous archaeological work in the area. Local libraries or archives, like the Doyle Leale McCall Rare Book and Manuscript Library at the University of South Alabama, provide useful resources.

Archaeologists conducting surface survey. Each flag represents an artifact observed on the surface.

Once the background is collected, we can begin physically surveying the area. Many archaeologists conduct pedestrian surveys, which involves walking over an area of land in evenly spaced parallel lines. While moving across the land, the crew will mark any visible artifacts with a flag (above). After the walk through, the crew can delineate the site’s boundary by the clusters of flags. Often, the locations of each individual artifact will be recorded and left in situ, or in its original location. Since this survey method relies on exposed soils, it is only effective in certain environments. For instance, here in Mobile, urban development, soil deposition, and vegetation typically obscure archaeological materials, necessitating subsurface investigation. 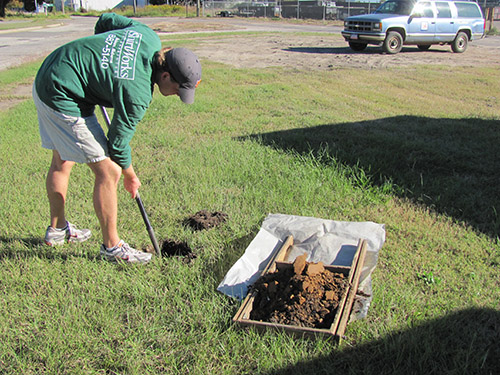 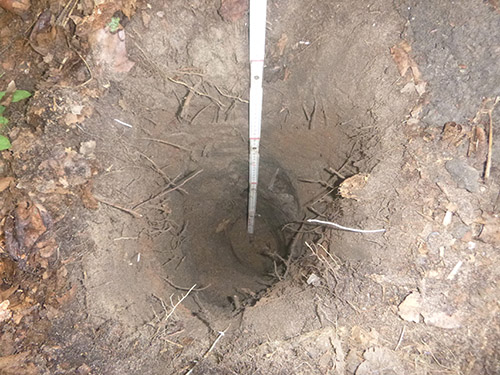 Shovel testing for the I-10 Mobile River Bridge Archaeological Project

Because of this, archaeologists usually dig shovel tests during survey. Shovel testing is used to determine if there are any subsurface archaeological materials present in an area. A shovel test is a minimally invasive hole, often about 30-50 cm in width. Soil is removed from the ground and sifted through a screen to identify artifacts. If any are found, they are collected and brought back to the lab. We take extensive notes, including information about the soil layers and depths, and take a GPS point to record the shovel test’s location. After, the sifted soil is backfilled into the hole. Shovel testing can identify an unknown site; it can also define the boundaries of a known site by determining where artifacts are present and absent.

Archaeologists also employ remote sensing methods which enable data collection about subsurface or submerged resources without making direct contact with them. Unlike excavation, remote sensing does not disturb the ground, leaving archaeological materials intact. This is especially important on sensitive sites, like cemeteries. One common method, Ground Penetrating Radar (GPR), is a machine that is physically pushed across an area of land. GPR machines transmit electromagnetic pulses into the ground and measure the signal’s strength and how long it takes to return. This allows us to estimate size, shape, and depth of subsurface features without doing any excavation. Other common remote sensing techniques are magnetometry and Sound Navigation and Ranging (SONAR). 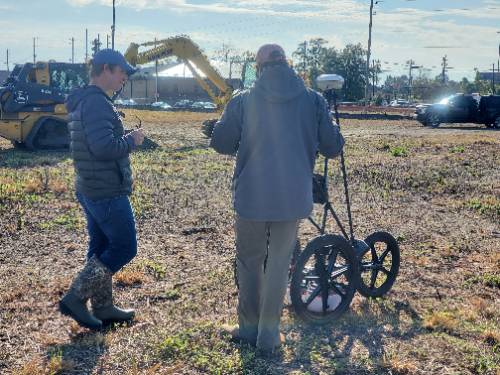 The Archaeologist’s Toolkit is a blog series written by Anthropology student Chelsea Cook. This series explores archaeological concepts and methods. Check out the other posts in the series to learn more:

Blog 1: What is Archaeology? Uncover common myths and misconceptions about archaeologists

Blog 2: What is Stratigraphy? Travel through time with a brief introduction to the archaeological laws of stratigraphy