Drew is a Chicago based actor working primarily in theatre. After completing his studies at USA, Drew went directly to the University of Arkansas, where he graduated with an MFA in Acting in 2011. Since completing his MFA, he has worked in Chicago (Oak Park Festival Theatre, Promethean Theatre Ensemble, Wakadoo Productions) and regionally (Theater at Monmouth, Arkansas Repertory Theatre, TheatreSquared.

I am a member of the Theatrical Wardrobe Union, Local 764, and am currently a dresser on Peter and the Starcatcher on Broadway. Since moving to NYC almost 2 years ago I have worked as a dresser, stitcher, and day-worker (laundry, maintenance, etc) on several Broadway productions. (Evita, The Normal Heart, The Scottsboro Boys, Chinglish)

In between shows, I work as a stitcher at some of the costume shops in the city including Parsons-Meares. I have worked on costumes for shows such as Phantom of the Opera, Book of Mormon, Spider Man, Lion King, Wicked, How to Succeed..., and many others. Before moving to New York, I was the Wardrobe Supervisor at the Arkansas Repertory Theatre, a regional theatre in Little Rock, AR.

Sara Argiro is a 2002 graduate of Theatre USA. Immediately after graduation, Sara worked as a dresser for the Biloxi Grand Theatre. She dressed several professional tours including CATS, The Sound of Music, Starlight Express, and Fiddler on the Roof. Sara received a Master of Arts in English along with secondary teacher certification from the University of Alabama in Huntsville in 2009. She served as the Theatre Performance Director at Lee Magnet High School in Huntsville, Alabama from 2010-2011. Currently, she teaches Theatre Appreciation, Theatre Performance and English at Plainview High School in Rainsville, Alabama. S'arge, as she's lovingly called by her students, directs approximately three shows every school year and is actively involved in bringing theatre to the community by conducting youth workshops and directing/acting for community productions. "I believe in the importance in furthering the Arts in public education as well as within the community. The Arts take us on a journey to discover humanity in all it's glory and weakness. Through this journey, we uncover our own inner greatness. Thank you,Theatre USA, for fostering and enabling my own personal journey." 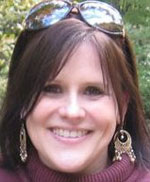