Office of the Executive Vice President

The Office of the Executive Vice President is located in the President’s Office and assists with administrative and personnel issues in both the University and the Health Systems Divisions of the University.

The Executive Vice President collaborates with other vice presidents to advance the University’s goals and objectives and has administrative responsibility for the departments of Student Housing, Campus Dining, USA Bookstore, University Police, and Safety and Environmental Compliance.

About the Executive Vice President

Dr. John W. Smith, Executive Vice President of the University of South Alabama, has more than 40 years of leadership experience in higher education.

After nearly 25 years at the University of Central Arkansas, including a period as Interim President, Dr. Smith arrived at the University of South Alabama in February 2008 as Vice President for Student Affairs. By 2010, his responsibilities expanded with the additional role of Special Assistant to the President in the administration of V. Gordon Moulton.

During Dr. Smith's tenure at South, the University greatly increased its appeal and capacity as a residential campus, with the addition of three new residence halls, a new dining hall, a new recreation center and a major renovation of the student center. He has supervised Student Affairs offices and support functions including housing, food service, the police department, Greek affairs, student activities, multicultural affairs, counseling services, student media, the bookstore, and safety and environmental compliance.

Dr. Smith, who holds the rank of associate professor in the College of Education and Professional Studies, has served as USA’s Faculty Athletic Representative to the NCAA and chair of the Athletics Council. He has been closely involved in compliance issues and established and served as chair of the Compliance Oversight Committee for Athletics.

Dr. Smith was appointed Interim President by the University of South Alabama Board of Trustees in spring 2021 at the retirement of President Waldrop. He has led the University’s efforts to reopen campus to full operations after the COVID-19 pandemic limited campus functions during the 2020-21 academic year.

In addition to his oversight of the main academic campus, as Interim President Dr. Smith also worked with senior leadership in the management of USA Health, an academic healthcare system with two hospitals, a cancer research and treatment center and a physicians’ network.

During his tenure at Central Arkansas, Dr. Smith served as Executive Vice President, Interim President, Vice President for Financial and Administrative Services, Vice President for Student Affairs and Dean of Students. He also held the rank of associate professor and taught graduate classes in ethics and law in higher education, budgeting, leadership and multicultural issues.

He holds a doctorate in educational leadership from Mississippi State University and a master’s degree in guidance and counseling from West Georgia College. He earned his bachelor’s degree in physical education from Berry College in Mt. Berry, Ga.

He is married to the former Jeanne Williams. The couple has three adult sons, Brian, Eric and Timothy, along with three grandchildren. 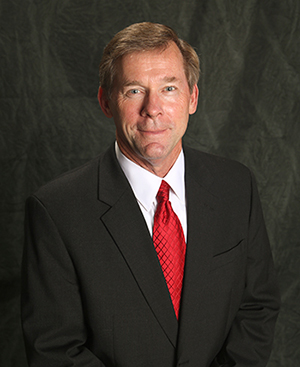