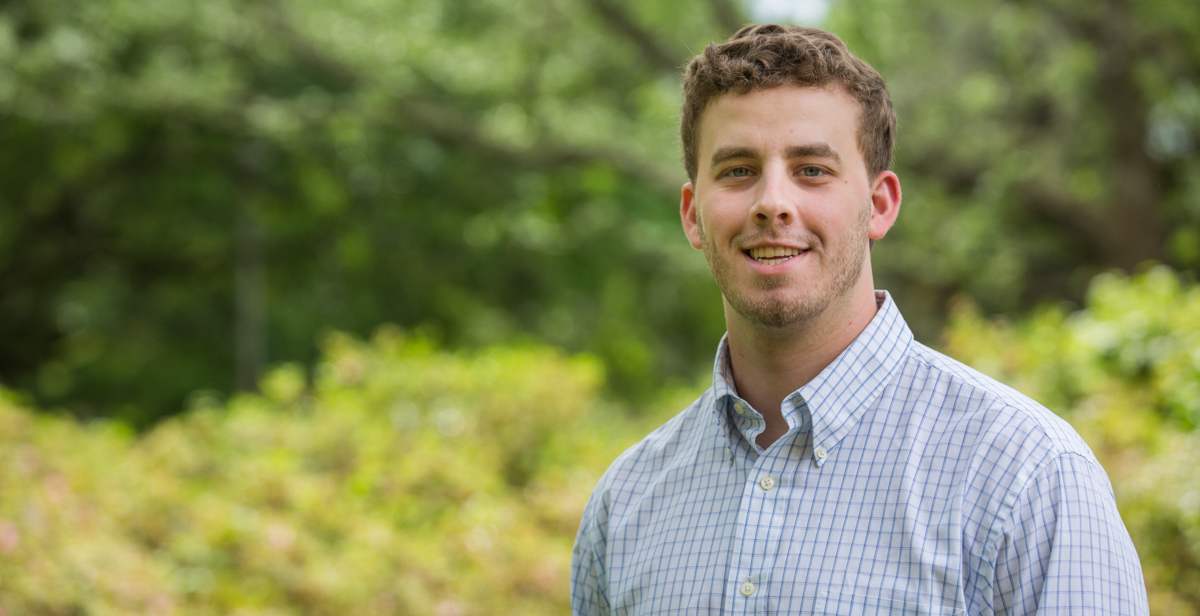 While at South, Stacy Lynwood Sergeant was involved as a Mitchell Ambassador, in the Catholic Student Association and as a member of the Marketing Club and Kappa Alpha fraternity. He also volunteers at Christ United Methodist Church and has trained his golden retriever, Moose, as a therapy dog.

Stacy Lynwood Sergeant considered only the University of South Alabama when he graduated from Mobile’s Baker High School. That’s because he wanted to follow in the footsteps of other family members who became Jaguars.

“All my family has gone here, including my older sister, who graduated in nursing, and both of my parents, Stacy and Laura Sergeant,” he said. “My mother is on the board of directors of the USA National Alumni Association, and my younger brother is enrolled here in mechanical engineering.”

His grandfather started at South, but he transferred to another university before graduation to pursue an architectural degree. As an architect, he designed a lot of the inside of USA’s Mitchell Center, Sergeant added.

During spring commencement on May 4, the 22-year-old will receive a bachelor of science degree in business administration with a focus in marketing.

“The Mitchell College of Business was another reason I picked South. I knew from the beginning I wanted to major in marketing and sales because I hope to obtain a job with a medical equipment company after graduation,” Sergeant explained.

Through the Mitchell College of Business, he landed a co-op job with Austal USA’s Mobile facility as a buyer/subcontract administrator. The position became an internship during spring semester.

“I began there as a co-op student in August 2017, and it definitely has been interesting. It’s a pretty demanding job, but it’s cool working with the Navy ships. Whenever I buy something, I can go out on the ship and see exactly what I bought,” Sergeant explained. “The job has taught me how to network, and I’ve been able to meet a lot of people and make connections with companies.”

While at South and maintaining a 3.91 GPA, Sergeant has also been involved as a Mitchell Ambassador, a member of the Marketing Club, the Catholic Student Association and as a member of Kappa Alpha fraternity.

Away from campus, he volunteers at Christ United Methodist Church, and he has trained his golden retriever, Moose, as a therapy dog for visits to nursing homes.

“He’s not certified yet, but he is allowed to visit one local nursing home because he’s so laid back. He rolls over, gives high fives and dances with people. He’s a really good dog,” Sergeant said. “It’s great to see him with Alzheimer’s or dementia patients. They usually remember Moose, and they will end up telling me about dogs they had.”

“My goal is to stay here in Mobile. That’s something I would love,” he said. “But, even if I take a job outside of Mobile, I and my family are definitely getting our season tickets for the new football stadium as soon as they go on sale!”