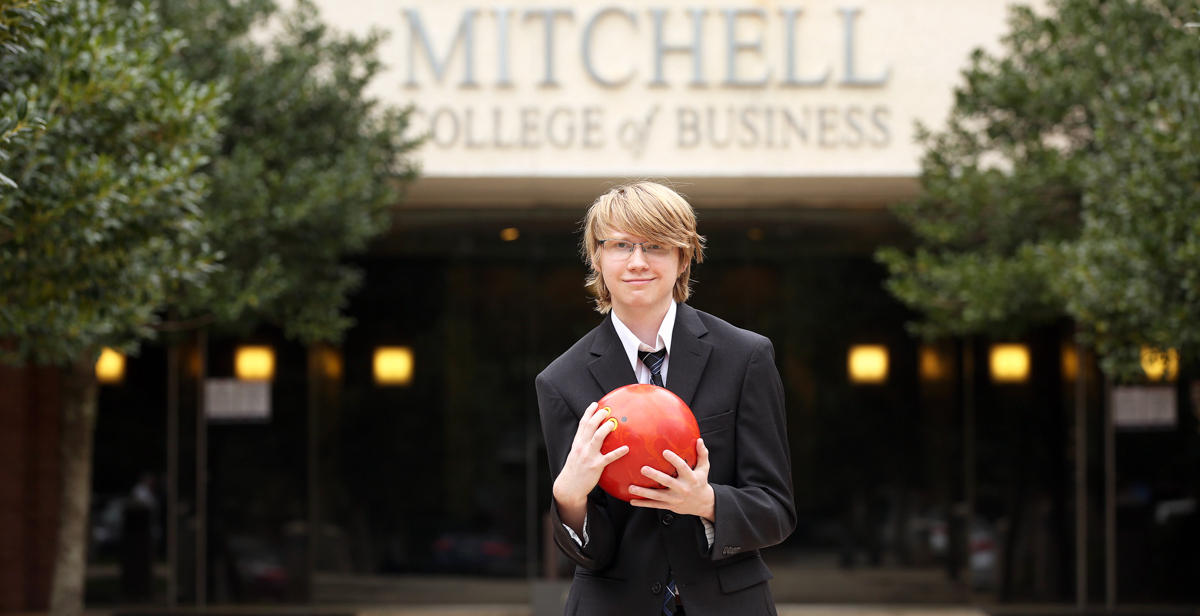 When Trey Hall toured the University of South Alabama as a student in high school, he was impressed to find the Mitchell College of Business had 12 Bloomberg terminals. “In that interview,” Hall said, “I thought, ‘Oh, I need to come here.’”

When Trey Hall was a high school senior in Pensacola, he visited South and the Mitchell College of Business.

Dr. Bob Wood, dean of the business school, mentioned that the University had a financial center with a dozen of the Bloomberg data terminals that keep a close watch on business news and the stock market.

“So I just blurted out, ‘You have how many of those machines?” Hall says, laughing. “And he had a chuckle at my reaction. In that interview, I thought, ‘Oh, I need to come here.’”

In Pensacola, Hall went to the West Florida High School of Advanced Technology. He applied himself and became a Mitchell Scholar at South.

When he isn’t studying, Hall enjoys bowling. For years, he’s worked and played at Cordova Lanes in Pensacola. As a competitive bowler, he’s serious about the sport, but has never managed to roll 300 for a perfect game. “The closest I ever came was bowling 280 in back-to-back games,” he said.

Hall still goes home to Cordova Lanes almost every weekend. He’d like to start a bowling team at South, too, and compete with cross-town rival Spring Hill College.

In Mobile, Hall rents a room from the uncle of his best friend from high school. It’s close to campus, which is convenient. At South, he works part-time as an IT assistant to a business professor.

His parents aren’t very interested in finance, but his grandfather follows the stock market. They had a talk when he started working part-time as a teenager.

Do you have a favorite spot on campus?

“Yes, Shelby Hall. I love listening to the fountain and the birds outside there. I sit as far as I can under the trees and de-stress.”

How much of the rest of campus have you seen?

“Boy, have I gotten lost. My second day, I’m looking for payroll services, have no idea where I’m going, and I’m half an hour later than I said I would be. Finally, I stumble in, entirely by accident.”

How are your classes?

What are some of your academic goals?

Academically, I want to major in finance, possibly come back later for my MBA, and minor in history. I'm really enthusiastic about history, and I take passion in learning as much as possible. I also could completely foresee myself taking a creative writing class or something else fun like that.

And you write poetry?

“I picked it up about four years ago. It’s kind of an emotional outlet, describing where I am at that place and time.”

What has going to school during a pandemic taught you?

It has been a lesson in both self-discipline and mental control. I have serious problems learning online, and I still do, but being forced into this hybrid environment has made me learn to adapt to a situation that under most circumstances I never would have to, and I've found myself managing my time better and trying to get assignments done in a more timely manner.

Where would you like to be five years after graduation?

“I could give you this grandiose plan of pipe dreams, but realistically, I’d expect to be a financial planner helping people manage their future. That’s what I’d like to do.”

Special. Out of every school I've toured or that close friends and family went to, South has stood out and cares about its students. I truly feel welcome and excited to be here.