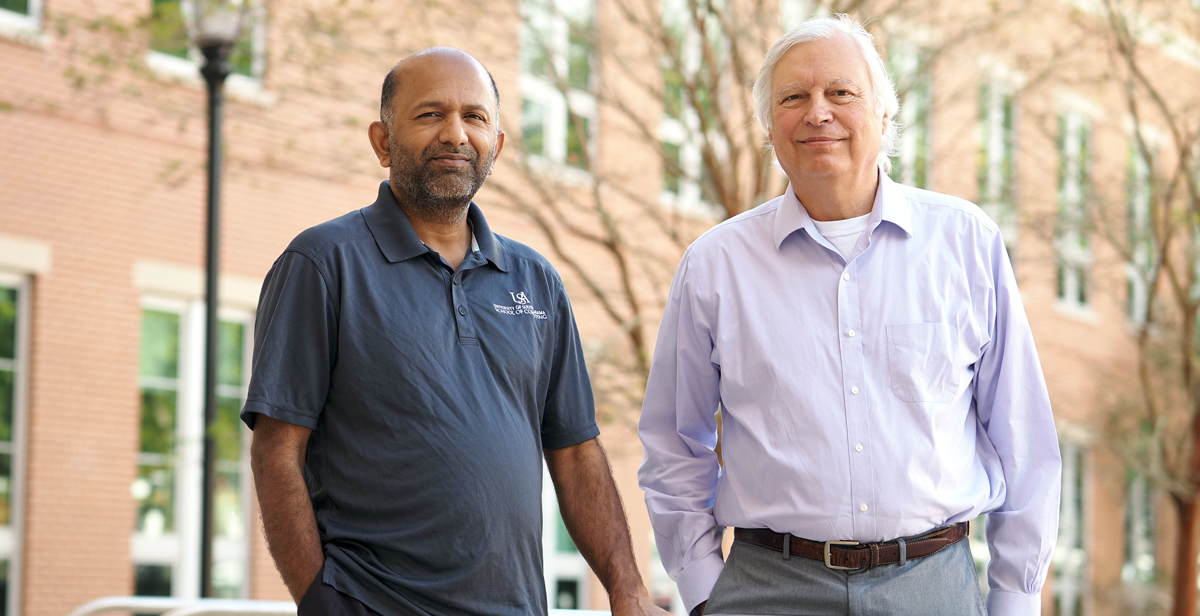 Dr. Prakash Duraisamy, left, assistant professor of computer science, and Dr. James Van Haneghan, chair of the Department of Counseling and Instructional Sciences, are collaborating on research that will examine the relationship between social media use and COVID-19 vaccine hesitancy among African American communities in Alabama.

University of South Alabama researchers began work this semester on a three-year study that examines the relationship between social media use and COVID-19 vaccine hesitancy among African American communities in Alabama.

South students and faculty will do interviews and surveys in Mobile County, while their counterparts at Tuskegee University will be doing the same in Macon County east of Montgomery.

“We want to understand the difference between African American communities in rural and urban areas,” said Dr. Prakash Duraisamy, principal investigator and assistant professor of computer science. “The same problem in Mobile may have a different perspective in Macon County, because those are more rural areas.”

In the past, various studies have found associations between social media use and beliefs in conspiracy theories and health misinformation. Researchers will be using machine learning, graphical analysis and data visualization techniques to improve representation and interpretation of results.

The South project is funded by a $595,000 grant from the United States Air Force Office of Scientific Research.

Dr. James Van Haneghan, chair of the Department of Counseling and Instructional Sciences in the College of Education and Professional Studies, who is collaborating with Duraisamy, said recent studies complicate the study of vaccine hesitancy.

Researchers have found that the COVID-19 death rate among Black Americans, which was higher for many months during the pandemic, is now lower than that of white Americans, according to the latest data from the Centers for Disease Control and Prevention. Questions remain about what this means for the perception of health problems in African American communities.

“I’m curious what we might find,” Van Haneghan said. “Originally, vaccine hesitancy was more of an issue in African American communities. Now the bigger issue might be how people relate the healthcare system. It might be that there are some surprises in here. Are we consistent with some of the recent reports on vaccine hesitancy? Maybe we’ll find social media isn’t driving all of this.”

The South researchers are working with Dr. Vivian Carter at Tuskegee University, where she is chair of the Department of Psychology and Sociology. Her research has focused on different health issues in rural communities.

The history of Tuskegee includes the infamous study of untreated syphilis in Black men conducted between 1932 and 1972. It is often cited as one of the reasons for distrust of the medical establishment in African American communities.

The researchers report that residents of Black communities in Mobile County are often wealthier and more educated than those in Macon County. This changes attitudes toward public health initiatives, along with the ways information and misinformation are exchanged on social media and in social networks.

“I think a lot depends on web access,” Van Haneghan said. “The other difference is that Mobile is an urban area with a lot of health access. We have a University hospital system and several local hospitals.”

There have always been rumors, misinformation and conspiracy theories to go along with public health initiatives. The explosion of social media, though, sends news and gossip bounding and rebounding across Facebook, Twitter and other platforms.

“It echoes a lot louder,” Van Haneghan said. “It makes things a lot easier to spread and a lot harder to fix.”

The study will start by examining vaccine hesitancy before moving into other beliefs about mental health within a community and healthcare in general. It also will explore how information solves or fails to impact local problems.

The primary goal of the project is to visualize how information – both false and accurate – flows through social media, traditional media and social networks to influence decision making. The second goal is to examine how various other factors moderate this influence.

In the end, graphics will describe how people are connected within a community, and how information travels back and forth across networks. It’s a process that begins with local conversations and ends with visual communication.

“We’re going to record interviews, convert them into text files, then convert them into data, and use it in our research,” Duraisamy said. “We’re looking at how information is distributed throughout the community, where it is absorbed, and what positions people are taking. In the big picture, that’s what we’re trying to do.”