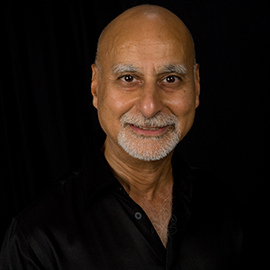 Mir Zohair Husain is a Professor in the Department of Political Science and Criminal Justice, where he teaches courses in Political Science and International Studies. After receiving his Ph.D. in International Relations from the University of Pennsylvania, he accepted a faculty position at the University of South Alabama in September 1986. During his years at USA, Dr. Husain has taught a thirty-four different Political Science and International Studies courses. He has published two editions of Global Islamic Politics with Pearson Longman and Global Studies: Islam and the Muslim World with McGraw-Hill. Aside from the aforementioned books, he has coauthored (with David M. Rosenbaum) an Instructor's Manual and Testbank to Accompany Global Islamic Politics with HarperCollins College Publishers, and published twenty-two articles in peer-reviewed journals and anthologies. Additionally, he has presented over fifty-four research papers at regional, national, and international conferences.

Dr. Husain is the three-time recipient of the Distinguished Service Award, presented by the Council of International Student Organizations (1995, 2003, and 2006); was twice nominated for the USA Alumni Association’s Outstanding Teacher Award (1993 and 1999): first by the Department of Political Science and Criminal Justice, and second by the Chair of Political Science and Criminal Justice, with endorsements from many professors, staff members, administrators, and students; is the two-time recipient of the Outstanding Advisor Award presented by USA’s Office of Campus Involvement and the Student Government Association (2004 and 2008); was twice awarded the “Top Prof.” by the Azalea Chapter of the Mortar Board National College Senior Honor Society and USA’s Student Government Association (2008 and 2011); earned the Fulbright Teaching Award as a result of which he spent nine months at Cairo University (2009-2010); received the Andy and Carol Denny National Association’s Excellence in Teaching Award (2012); was named “Scholar of the Year” for 2013 by USA’s Chapter of the Phi Kappa Phi Honor Society (one of the oldest, largest, and most selective collegiate honor society for all academic disciplines in the U.S.); recognized as one of the Fifty Outstanding Faculty Members in USA’s fifty year history for teaching, research, and service (May 2013); and received USA’s College of Arts and Sciences’ “Teaching Excellence Award” in October 2015.

Islam and the Muslim World

The Study of Comparative Leadership

“The Code of Hammurabi,” (with Stephen Costanza) accepted for publication in The Encyclopedia of Corrections, Wiley Publishers, and will be published in Spring 2018.