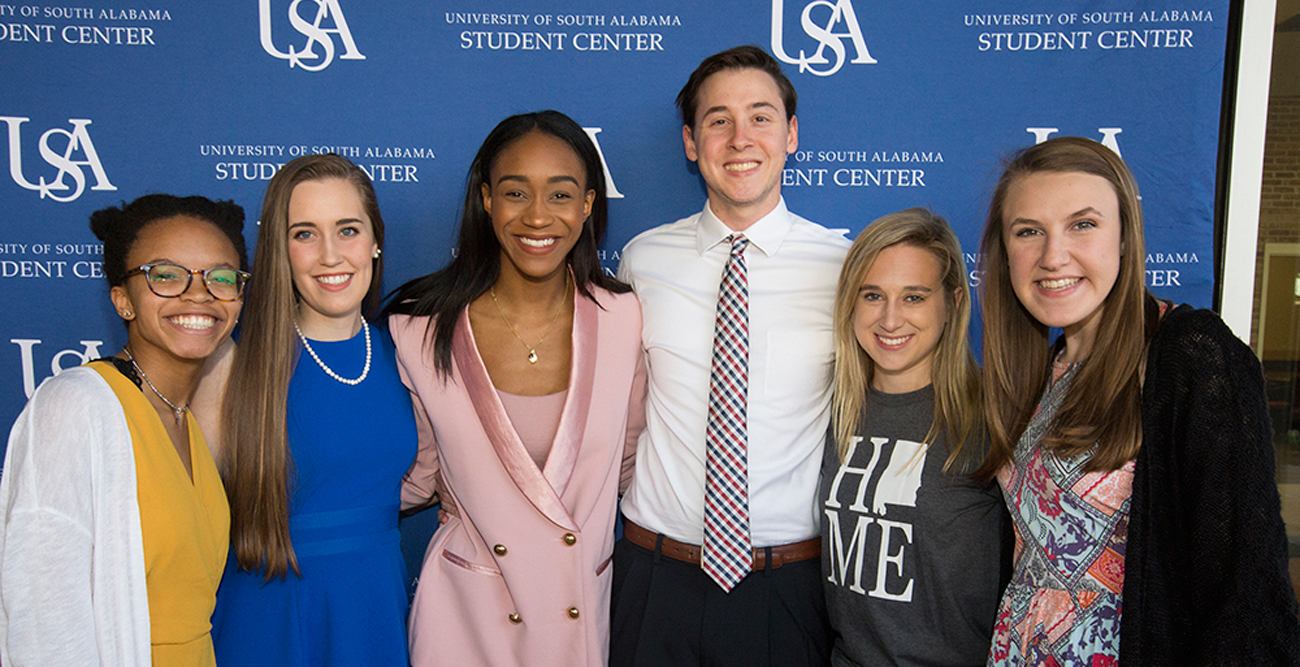 After two days of voting, the results showed Sahilee Waitman, 21, a junior economic and finance major from Amsterdam in the Netherlands, had been elected student body president along with other executive officers.

“Being able to serve the student body gives me great pleasure, knowing that we as officers are shaping opportunities for those that come after us,” Waitman said. “We will hit the ground running, aiming to cultivate internal growth at South while our University is growing externally.” Waitman is a graduate of Milton High School in Milton, Fla. Since studying at South Alabama, she has represented the University as a Mitchell College of Business ambassador, USA Southerner and SGA Mitchell College of Business senator. Her father, Jose Waitman, also attended South Alabama as a collegiate athlete during the 1980s. She is the daughter of Fine Chaar and Jose Waitman.

Lacey Bemis, 21, of Foley and a graduate of Foley High School, will serve as vice president. She is a junior majoring in nursing. Bemis has been a member of Chi Omega and SGA for two consecutive years as well as serving on First Year Council. She has been named to the dean’s list. She is the daughter of Gordon Bemis and Shelia Willis.

Caleb Santa Cruz, 21, of Foley and a graduate of Foley High School, will serve as treasurer. He is a junior majoring in strategic communication. Santa Cruz is a member of Alpha Tau Omega, SGA, USA Southerners and the Jag Nation Television staff. He’s also been a member of First Year Council and is an Eagle Scout. He has been named to the dean’s list. He is the son of Chris and Melody Santa Cruz.

Hope Hill, 19, of Wetumpka, Ala., a graduate of Elmore County High School, will serve as attorney general. Hill is a sophomore majoring in chemistry. Hill is a member of USA Southerners and the Honors College. She is also a Whiddon Scholar. She is the daughter of Tish and Trent Hill.

Tia Nickens, 20, of Rantoul, Ill., a graduate of Rantoul Township High School, will serve as chief justice. Nickens is a sophomore majoring in secondary education. Nickens is a member of Chi Omega and a current resident assistant. She is also a Leadership Scholar and dean’s list recipient. She is the daughter of Timothy and Tawanna Nickens.

Cana Brown, 19, of Helena, Ala., a graduate of Helena High School, will serve as student-at-large. Brown is a sophomore majoring in biomedical sciences. Brown is a member of Chi Omega and a current resident assistant. She is a member of the Honors College and has been a President’s List recipient for three consecutive semesters. She is the daughter of Bo and Stephanie Brown.

SGA officers protect and advance students’ interests as well as promote the welfare of the student body. The organization operates as a constitutional democracy and is comprised of executive, judicial and legislative branches. The new leaders officially take office after South’s spring commencement on May 4.

For more information about the USA Student Government Association, call (251) 460-7191.