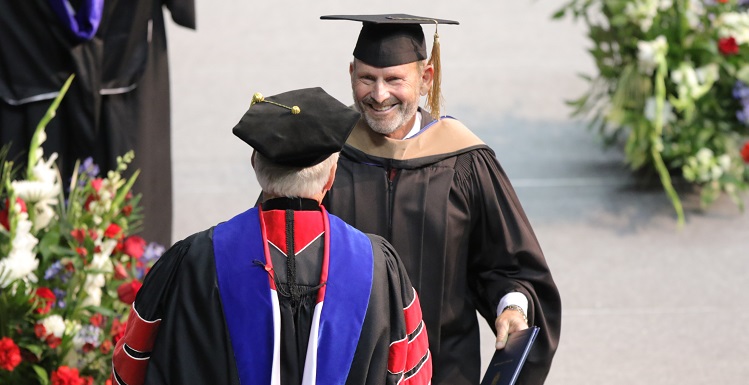 Retired Coast Guard Vice Admiral William "Dean" Lee's name was the first called Saturday as he led graduates to receive their degrees, then to shake hands with USA President Dr. Tony Waldrop. Lee graduated in 1979 but did not walk, "something I've always regretted."

Retired U.S. Coast Guard Vice Admiral William “Dean” Lee advised and entertained graduates of the University of South Alabama on Saturday as he delivered their Commencement address, then joined them in line to walk across the Mitchell Center stage and receive his own diploma.

Lee, who completed his studies in criminal justice at South in 1979, didn’t participate in his class commencement, telling this year’s graduates that he decided “instead to go to Pensacola Beach and spend the day with my buddies — and it was something I’ve always regretted.”

Lee’s name was the first called as he led graduates from the College of Arts and Sciences to receive their degrees, then to shake hands with President Tony Waldrop. As Lee raised his arms in celebration, the audience applauded and cheered. In all, 1,504 degree candidates were recognized Saturday.

Lee, who retired from the Coast Guard in October after serving 14 tours in 36 years at virtually all levels, rose from enlisted status to operational commander for all missions from the Rocky Mountains to the Arabian Gulf, spanning across five of the Coast Guard’s districts and 40 states, overseeing 60 percent of the Coast Guard, including 21,000 active duty members as well as thousands of reservists and civilian employees.

Lee’s keynote address was interrupted several times with applause from the audience as he outlined his five rules for success:

Finally, Lee told the students that while some members of his own generation have written books about how today’s young people are going to fail, he believes the opposite.

“I know you aren’t going to fail because I can see it in your faces,” Lee said. “Just remember, no matter how high you climb that ladder of life, stay on it. Finish well!”