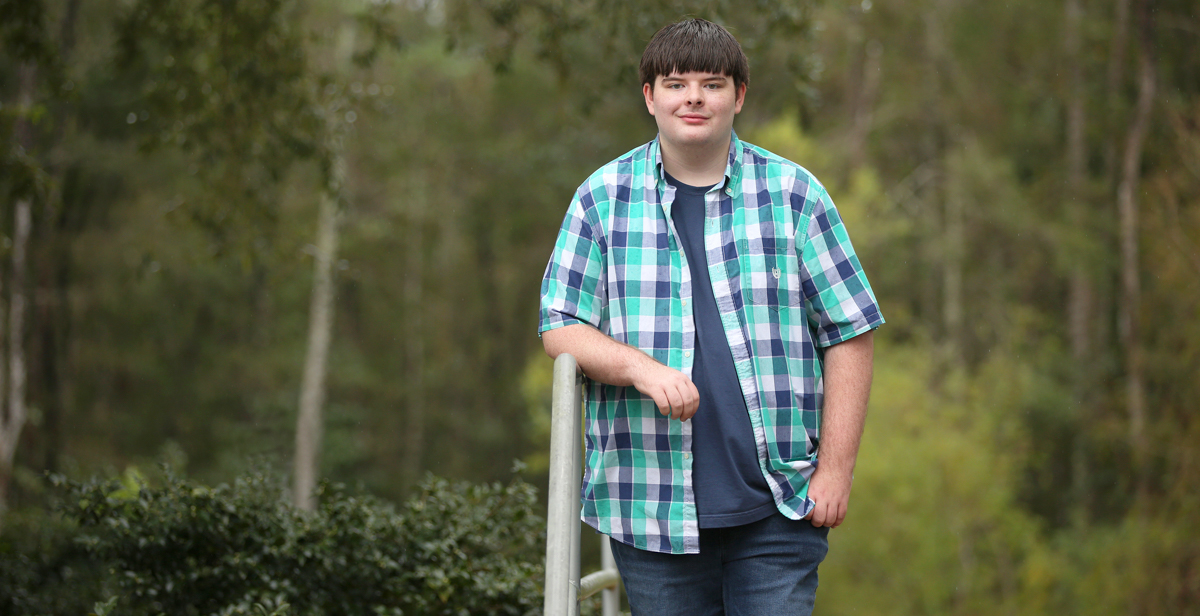 Honors student and freshman Samuel Blankenship's Eagle Scout project was “Unpack Hunger,” a food collection and distribution program. “Once quarantine hit, it turned into delivering packs to the school counselor, so kids could keep getting them. We were able to do 25 packs for 10 weeks,” he said.

At Demopolis High School, Samuel Blankenship chose a career track in healthcare, which led him to an interest in pharmacy.

“When my mother was going through cancer treatments, she was having trouble with her prescriptions, so I got a lot of home experience on the customer side of it,” he said. “During my junior year, I got to shadow a local pharmacist. During my senior year, my teacher helped me and another student work online to get our certification as pharmacy techs.”

At South, Blankenship, 18, is a member of the Honors College and a biomedical sciences major. He wants to get established academically before becoming active in student organizations. In high school, he belonged to several clubs. He also answered quiz questions in the Alabama Scholars Bowl.

“I wasn’t the best member of the team, but we all had our roles,” he said. “Mine was history, sports and random things. There was this one question about ‘Sponge Bob’ characters, and I got that one right.”

Blankenship got a late start in the Boy Scouts of America, but still managed to earn 21 merit badges and become an Eagle Scout, the highest honor in the organization.

His final project was “Unpack Hunger,” a food collection and distribution program for students in need. His plan which wound up coinciding with the beginning of the coronavirus pandemic.

“We had to start really fast,” he said. “I’d been planning a project to deliver food to the school, but once quarantine hit, it turned into delivering packs to the school counselor, so kids could keep getting them. We were able to do 25 packs for 10 weeks.”

What is your favorite spot on campus?

“I like where all the residence halls are. It’s kind of relaxing. I walk by this little pond on my way to the dining hall.”

So you’re living on campus. How many boxes did it take for you to move in?

“Maybe six or 10 boxes. Most of the stuff we brought was too big for a box. There were some pictures, a TV and a computer, things like that. We actually brought a hand truck, so that made it really easy.”

Do you have a roommate?

“When a single room opened up in my hall, I went and took it. I thought, one, it would be safer during the pandemic. And two, during my first semester, my first year, it would be good to start getting my bearings at school and everything.”

“My chemistry class is pretty fun. My chemistry teacher, Dr. Larry Yett, is pretty funny. I expected him to be really strict, but we spent a lot of time the first week getting to know everyone. Hearing his stories was hilarious.”

“I don’t like to consider any of this the new normal. It’s more like a phase. Eventually, it’s going to end. I like knowing that eventually things will go back to the actual normal.”

How did you choose South in the first place?

“It was closer to home than some other schools. During my junior year, I took a tour. I thought it was a nice, medium-sized university, not big enough to make you feel like you’re in an auditorium with a thousand other students. I applied for early acceptance in the pharmacy program, and I was accepted, so after that I was pretty much locked in.”

Do you have a hidden talent?

“I don’t think so. The thing about a hidden talent is that it’s hidden, right?”