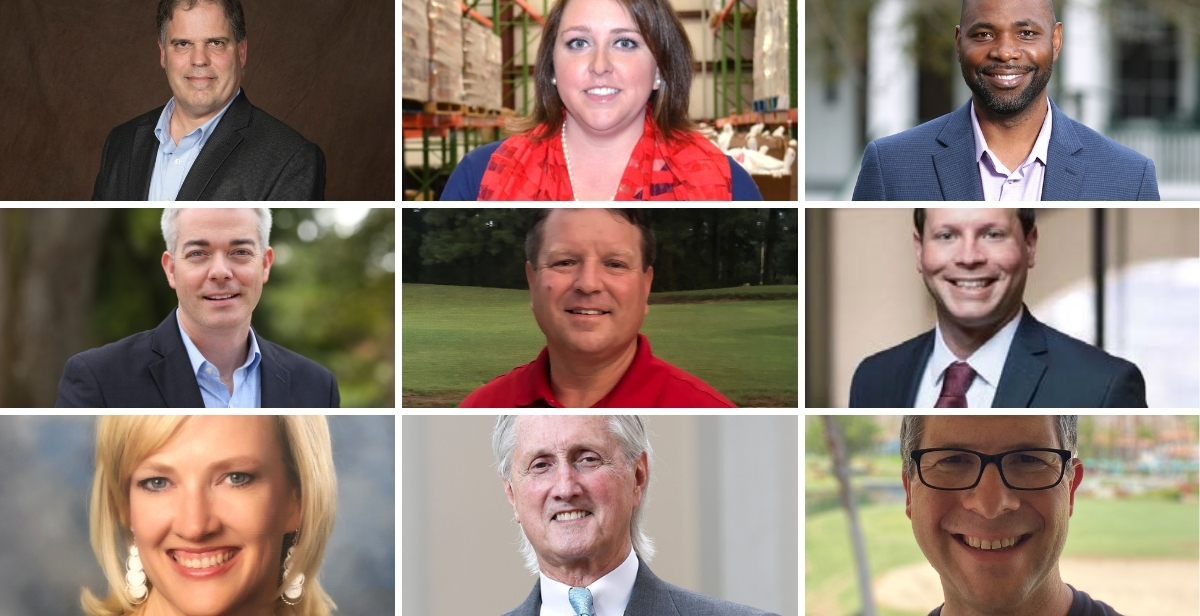 The University of South Alabama National Alumni Association elected three new officers and four new directors during its annual membership meeting on Thursday, September 10. The officers will lead the organization, with more than 5,400 members, until 2022.

Kim Lawkis, the Association’s vice president, earned a dual B.A. in history and English in 2011 and an M.P.A. in 2013. She currently serves as director of policy and programs at the Alabama Food Bank Association. Lawkis also spent more than three years as nutrition programs director at the Bay Area Food Bank. She and her husband, Nick Lawkis ’09, ’11, live in Mobile and have two children, Jack and Collins.

Ron Stallworth is the Association’s secretary/treasurer. Stallworth earned a B.S. in chemical engineering from USA in 2003 and an M.B.A. from the University of Chicago Booth School of Business in 2009. He spent 33 years with Honeywell, serving several roles including Global Commissioning and Startup Center of Excellence leader and ‎interim vice president, integrated supply chain. He currently serves as senior director of business development at Hargrove Engineers + Constructors. Stallworth and his wife, Karan, live in Mobile.

Patrick Dungan is the Association’s immediate past president. Dungan graduated from USA’s College of Arts and Sciences in 2006 and received a J.D. from the University of South Carolina School of Law in 2011. He is an associate attorney with Adams and Reese, LLP in Mobile. Dungan is also co-owner of AFC Mobile, Mobile's semi-pro men's soccer team. He and his wife, Laurie, also a South alumna, have two children, Jonas and Rowan.

Ross Bonura received a B.A. in public relations from the University of South Alabama in 1995. Bonura serves as general sales manager for Mitchell Nissan in Enterprise and has worked with the company for 24 years. He is a volunteer with Wiregrass United Way and served as the 2018-2019 Coffee County Campaign Chair. At South, Ross was a member of the Kappa Alpha Order and remains active as an alumnus.  He and his wife, Schoen, live in Enterprise.  They have two grown children, Camille and Mitchell.

A Mobile native, Neil Christopher graduated from the University of South Alabama in 2007 with a B.S.  in business administration. Christopher has 14 years’ experience in audit and tax public accounting as well as private accounting. He currently serves as vice president of finance and operations for the Mobile Area Chamber of Commerce and the Mobile Area Chamber of Commerce Foundation. At South, Christopher serves on the Accounting Advisory Board. He has volunteered with the Ronald McDonald House and the American Cancer Society Chili Cookoff. Christopher and his wife, Whitney, have two children, Landry and Eliza.

Laura Gabel graduated from USA in 1994 with a B.S. in business management from the Mitchell College of Business. She is the president of Next Steps Solutions, a boutique consulting firm focused on developing solutions for clients nationwide in the nonprofit, education and small business sectors.  For the past 30 years, Gabel has contributed her time to local, state and national nonprofit and governmental boards in the areas of education, arts, healthcare and public affairs. She and her husband, Greg, live in Salt Lake City, Utah and have two children, Hunter and Hannah.

Dr. Joseph Molyneux, is a retired professor of criminal justice and security management ethics at the American Military University. He earned B.A. in political science from the University of South Alabama in 1971 and a master’s degree and Ph.D. in political science from the University of New Orleans. Molyneux’s career includes time with the Bureau of Alcohol, Tobacco and Firearms as a special agent, the U.S. Customs Office of Investigations in Mobile, the U.S. Drug Enforcement Agency and the FBI. Molyneux received a USA National Alumni Association Distinguished Alumni Award in 2018 and is a member of the board of directors for the American Red Cross Louisiana. He and his wife, Cindy, live in Metairie, La.

Dr. Bryan Op't Holt graduated from USA with a B.S. in chemistry in 2001. He earned a Ph.D. in chemistry from the University of Florida, completed postdoctoral studies at Stanford University and the Executive Leadership Program at Harvard Business School. Op't Holt has worked with Kaiser Permanente for 12 years and currently serves as area director of account management. At South, he was an officer in Sigma Alpha Epsilon fraternity and was active in intramural sports and Campus Crusade. Bryan lives in the San Francisco Bay Area with his wife, Jenny, and their two sons.