The USA College of Education and Professional Studies Department of Integrative Studies offers an internship capstone course for students in the interdisciplinary studies. The internship course offers a unique, real-world opportunity for students to develop managerial and interpersonal skills, balanced between theory and practice.

Internship Opportunities
Recently approved internships have been with a variety of non-profits, local government agencies and local and regional businesses. Click below to view a list of current internship partners.

Apply for Internships
Internships provide on-the-job experience. Students must be a graduating senior and have completed the two required pre-reqs. Click below to learn about the internship application process.

USA interdisciplinary studies interns gain experiences through a variety of organizations. Recently approved internships have been with non-profits, local government agencies, and local and regional businesses. The flexibility inherent in the internship program allows students to explore and secure a wide-range of internship site possibilities. 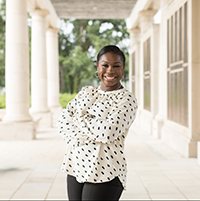 Sheldonna Chappell is an educational studies August 2020 graduate and recently completed an internship at the Waterfront Rescue Mission in Mobile.

“Moving from Fort Payne, AL., to Mobile was a very interesting experience because I came down here knowing absolutely no one,” said Chappell, who played basketball, volleyball and ran track at Fort Payne High School. “I knew of people on the track team at South, but I didn’t actually have a friendship or had never talked to them. To me, it is the best thing that I have ever done. I got to experience and make friends that I didn’t know I would.”

While in high school, Chappell was MVP three years in track, state champ in the 100 m dash, and played on the all-conference winning basketball team. While at South, Chappell ran on the track team for two years and served as a student coach for two years.

“Being a student-athlete at South has been so liberating,” Chappell said. “Just being able to wear the uniform and to continue the sport that I love so much was so much fun. I loved the coaches, and I felt like I built such strong bonds with many people while being a part of the track team.”

Chappell was diagnosed with an autoimmune disease in 2014 called Sjogren’s. Last year, she battled with her health and had an abdominal wall that required major surgery.

“I didn’t really get many results, but the one thing I found out is I also have an autoimmune disease called lupus,” Chappell said. “Both of my autoimmune diseases have affected me in a lot of different ways physically and mentally. I’ve had to work through a lot to be where I am today.”

“The track did a lot of damage on my body and especially my bones, but I was able to have treatment that helped me so much while being on the track team. Last year, I had to go home because I had so many surgeries, and it helped my mind refocus on my grades and what I wanted to do after I got out of college.”

Chappell started her internship at the Waterfront Rescue Mission earlier this summer, and completed her experience virtually through the pandemic.

“I was able to help with financial literacy, job literacy and some regular literacy,” Chappell said. “This internship impacted my future because it showed me I know how to do a lot more than I thought I did, and it also helped me learn new techniques to use technology. I made videos to help the men at the facility learn how to balance a checkbook and how to use Indeed in a proper way to find jobs. Even though I want to be a K-6 teacher, I also learned the diligence of how to speak and to teach adults.”

Chappell hopes to start graduate school at South in the fall.

“In the future, I would love to be involved in athletics as a coach,” Chappell said. “I think coaches have a special place in many of their athletes' lives and they help children more than they realize. Coaching is a way to teach but to also help and guide young people.” 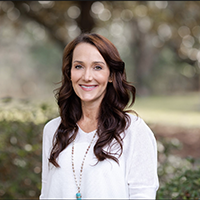 Katy Holt (pictured above) graduated August 2020 with a bachelor’s degree in interdisciplinary studies and recently completed an internship with the City of Gulf Shores SPARC program.

The SPARC concept is designed for Strengthening Potential through Arts, Recreation and Culture by providing youth a safe and supportive environment; fostering education, personal growth, character development and overall resiliency. Staff members are devoted to carrying out the SPARC mission while delivering fun, hands-on experiences for the youth in the community.

“The beginning of the summer was filled with painting, organizing chairs, desks and supplies,” Holt said.

However, the pandemic brought challenges for Holt’s experience.

“I was so excited about the camp beginning in July,” Holt said. “June had already been canceled when my internship began. On June 17, we got the news that SPARC would not happen this summer. I was so bummed and concerned that I would not be able to continue with the internship. Amanda, the director of the program, was amazing. She kept me busy within the same department working on after-school programs for the upcoming school year and planning for next summer's camp field trips and activities.”

Holt began her college journey in 2001 at Troy and moved back to Gulf Shores. Years later, she decided to attend South Alabama to finish her degree.

“My internship taught me to ‘roll with the punches,’” Hold said. “I learned that scheduling for children's summer camps and education is extremely time consuming and important. I have learned that teamwork is vital when coming up with new and exciting activities for youth programs.”

Holt plans to be a business development manager with a rental management company.

“I was not a traditional college student,” Holt said. “I am 36 years old, with two children and a loving husband. My free time is active to say the least.”

Holt said COVID-19 has changed everything in her life, both professionally and educationally.

“The pandemic has taken away my walk in graduation and my summer camp experience with children present,” Holt said. “It has taught us that we are all a lot stronger than we were before this all started. The uncertainty has been extremely challenging and has made me appreciate things that I did not think about before.  I appreciate the director of my internship site. She was amazing in finding daily tasks to help me fill my hours. I know that it was all worth it and feel excited for the future.”

The IST498 Internship Application Process begins the semester prior to a student’s graduating semester. The secretary for the Department of Integrative Studies handles all communication with pending graduates for the internship application process until they have registered for the course.

Since it can be a somewhat lengthy application process, emails from the Department of Integrative Studies secretary are sent early in the prior semester to all students who have applied for graduation.  Due to several deadline requirements, students must check their emails regularly to stay on track.

The Internship Application Process begins with an email informing students the process has started with paperwork deadlines. Deadlines include (in order): application, required attendance to the internship orientation/information sessions, worksite paperwork completed and approved by the department and the agency agreement approved and completed by the worksite and the USA Attorney’s Office. Once all deadlines are met and approvals have been given, students are then allowed to register for the course, not before.