LOMBARDO ON JANUARY 6 IN USA TODAY

USA OUT IN THE WORLD!

Dr. David Meola led a seminar on Antisemitism and its history in Spring, 2022, and students from that class travelled to Montgomery in April 2022 to participate in a seminar with students at five other Alabama Universities studying the same subject. 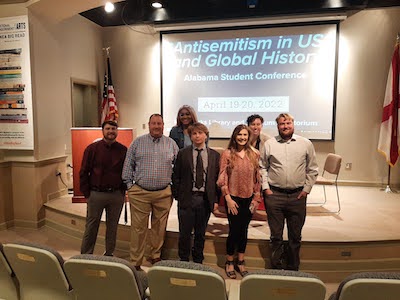 October 2021 Dr. Kathy Cooke, Professor of History and Dean of the Honors College, is leading a team of faculty and staff from the McCall Library and Archives and the Archaeology Museum that has secured a $453,000 grant from the National Endowment of the Humanities to support and grow the University's involvement in community history across Mobile and our Gulf Coast region. This is the largest Humanities grant ever awarded to the University! Congratulations! See more here: https://www.southalabama.edu/departments/publicrelations/pressreleases/100421nehgrant.html

September 2021 Dr. David Messenger was recently interviewed by the Huffington Post Spain, commenting on the upcoming Spanish TV show Jaguar, a story of Nazi hunters in Spain in the 1960s and comparing it to reality. Messenger wrote on this subject in his 2014 book Hunting Nazis in Franco's Spain (LSU Press), published in Spanish in 2018 as La Caza de Nazis en la Espana de Franco (Alianza Editorial). The link to the article (in Spanish) is here: https://www.huffingtonpost.es/entry/jaguar-cazadores-nazis-espana_es_612e188de4b06e5d80d1d938

December 2020  Dr. Claire Cage is one of 13 USA Office of Community Engagement and Service Learning Program Faculty Fellows.  The inaugural class of faculty fellows will work together to learn and redesign an academic course and/or a research project to help solve real-world issues locally in collaboration with community partners.

December 2020 Dr. Mara Kozelsky received seed money from a U.S. Department Education Grant for a digital humanities project to build a digital history lab. The lab will allow the History Department to train our students to become leaders in the next era of the information age.

November 2020 A team at the University of South Alabama led by the Honors College, with collaborators from the Office of Community Engagement, African American studies program, department of history, and the Doy Leale McCall Rare Book and Manuscript Library, received a renewal for its Delta Fellows program from the Jean O’Connor-Snyder Internship Program at the David Mathews Center for Civic Life.

October 2020    Dr. Mara Kozelsky and her book Crimea in War and Transformation (Oxford University Press, 2018) received an Honorable Mention in the 2020 Marshall Shulman Book Prize from the Association of Slavic, East European and Eurasian Studies (ASEEES).  The prize is for an outstanding monograph dealing with the international relations, foreign policy, or foreign-policy decision-making of any of the states of the former Soviet Union or Eastern Europe. The prize went to the Department’s 2019 Mahan Lecturer, Dr. Kate Brown of the Massachusetts Institute of Technology, for her book Manual for Survival: An Environmental History of the Chernobyl Disaster (W.W. Norton & Company, 2019).

University of South Alabama graduate student, Marcee Hinds has been named the 2020 Gilder Lehrman Institute’s History Teacher of the Year for Alabama. The Gilder Lehrman Institute is the nation’s leading organization dedicated to K-12 American history education. Hinds teaches at Baker High School and was selected by a panel of teachers, administrators, and scholars from Alabama for her achievements in American history education.

Dr. Timothy Lombardo was nominated by the University of South Alabama for a National Endowment for the Humanities Summer Stipend grant and has learned he was awarded the grant- one of 108 grant winners from thousands of nominees. This funding will allow Dr. Lombardo to examine archives around the United States for his second book project, tentatively titled  Beer Cities: How Craft Brewing Remade Urban America. This work will examine late 20th century urban revitalization and gentrification in America through the prism of the craft brewing industry. The aim of the project is to use the resurgence of small-scale brewing since the 1970s to address larger questions about race, class, gender, inequality, post-industrial economies, popular culture, urban politics and policy, and the use and re-use of urban space. Congratulations, Dr. Lombardo! The NEH announcement is here: https://content.govdelivery.com/accounts/USNEH/bulletins/2853040

In the 2019-20 academic year, three faculty in the Department of History won the University of South Alabama's Seed Grant to support the Arts and Humanities t fund research. These are familiar names, winning awards from across campus and nationally - congratulations to Dr. Claire Cage for her project "Sex Crimes and Colonial Courts in Nineteenth-Century French Algeria," part of her larger work on the development of forensic medicine in criminal investigation in 19th century France; Dr. Timothy Lombardo for "Beer Cities: How Craft Brewing Remade Urban America," his second book project on urban gentrification and the growth of the craft brewing movement in the Unites States from the 1970s on; and Dr. David Meola for the beginning research on his second book project, entitled "Fighting among the Volk: Jews in the German Liberal and Democratic Movements before 1848."

Dr. Kelly Urban has been awarded a Summer Professional Development Grant from the College of Arts & Sciences at USA. She will use this grant to work on completing her book, tentatively entitled Politicosis: Tuberculosis, Public Health, and Politics in Cuba, 1925—1970. This follows the award of a Faculty Development Council grant and a grant from the American Historical Association last year, which allowed Dr. Urban to carry out final research for her book in Cuban archives. Congratulations, Dr. Urban!

Dr. Claire Cage, Associate Professor of History, has been awarded a National Endowment for the Humanities (NEH) Fellowship for the calendar year 2021. This is the largest individual grant given by the NEH, an entity of the federal government meant to support research and creative work in the humanities across the United States. This Fellowship, worth $60,000, will allow Dr. Cage to conduct research in France and complete writing a book for her research project entitled "The Science of Proof: Forensic Medicine in Nineteenth-Century France." Congratulations!

See the full announcement of all the NEH awards here: https://content.govdelivery.com/accounts/USNEH/bulletins/2757bd4

Dr. David Meola, Fanny and Bert Meisler Assistant Professor of History and Jewish Studies, recently published two new pieces of research. The first is the chapter "Making News: Jewish Germans and the Expansion of Vormärz Print Culture" in Vance Byrd and Ervin Malakaj, eds., Market Strategies and German Literature in the Long Nineteenth Century (Berlin: Walter de Gruyter, 2020). The second is entitled "Mirror of Competing Claims: Antisemitism and Citizenship in Vormarz Germany" and appears in the journal Antisemitism Studies 4:1 (2020). Both of these writings are drawn from Dr. Meola's research on the German Jewish community in the 1830s and 1840s. Congratulations, Dr. Meola!

Dr. David A. Messenger, Professor in the Department of History and Chair of the Department, has published a new book entitled War and Public Memory: Case Studies in Twentieth Century Europe with the University of Alabama Press, as part of their "War, Memory and Culture" series. This book is not based on original research, but draws on the writings and research of many scholars to introduce students and others to how different societies and cultures remember their national conflicts, and how memories evolve over time. The case studies presented emphasize the major wars fought on European soil as well as the violence perpetrated against civilian populations. Each chapter begins with a brief overview of the conflict and then proceeds with a study of how memory of that struggle has entered into public consciousness in different national societies. The focus throughout is on collective social, cultural, and public memory, and in particular how memory has emerged in public spaces throughout Europe, such as parks, museums, and memorial sites. Messenger discusses memories of the First World War for both the victors and the vanquished as well as their successor states. Other events discussed include the Bolshevik Revolution and subsequent conflicts in the former Soviet Union, the Armenian genocide, the collapse of Yugoslavia, the legacy of the civil war in Spain, Germany's reckoning with its Nazi past, and the memory of occupation and the Holocaust in France and Poland.

See the attached story for details of a significant multi-student research project in oral history in the Mobile-Tensaw Delta region, guided by the USA Honors College and Dean Kathy Cooke, also a member of our Department: https://www.southalabama.edu/departments/publicrelations/pressreleases/120919delta.html

Congratulations to Dr. David Meola, who has been awarded a J. William Fulbright Fellowship to Germany to conduct summer research from 2019 to 2021 in the city of Goettingen (at the University of Goettingen). This time will be spent on researching his book project: "Fighting for the Volk: Jewish Germans in the German Liberal and Democratic Movements before 1848”.