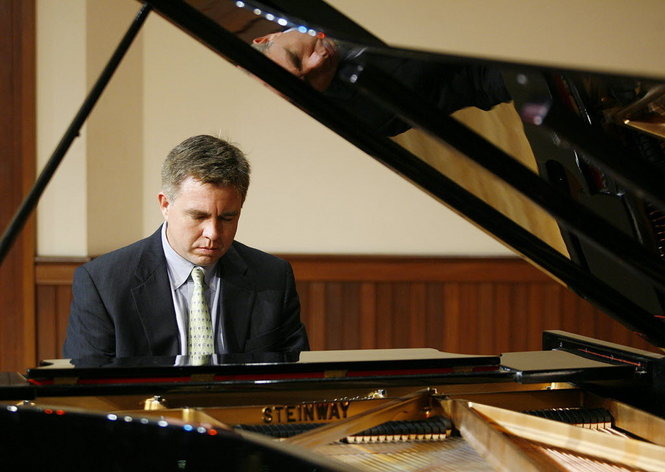 Robert Holm, a Steinway Artist since 2010, is Professor of Music and head of the piano division at the University of South Alabama, principal pianist for the Mobile Symphony Orchestra and pianist at Dauphin Way Baptist Church.  Prior to his appointment at USA in 1997, Holm received a B.A. in Piano at Pt. Loma Nazarene University in San Diego followed by studies at the University of Illinois School of Music with Professor Kenneth Drake, where, in 1999, he earned a D.M.A. in Piano Performance and Literature.

He was a finalist at both the 2003 International Franz Liszt Competition in Grottammare, Italy and the 2002 International Bartók-Kabalevsky-Prokofiev Competition in Radford, Virginia, and Third Prize winner at the 1997 International Beethoven Piano Sonata Competition in Memphis, Tennessee. In 1988, Holm was one of 88 pianists who performed with Chubby Checker and the Rockettes at the Superbowl XXII halftime show in San Diego, California.

In 2006, Holm, violinist Enen Yu and cellist Guo-Sheng Huang formed the Archduke Piano Trio, which has performed over 35 standard chamber works throughout Alabama and Mississippi. In 2015, Holm joined Gerald Anderson, Jeff Bennett and Stephen Nielson as the newest member of the four-piano ensemble Festival of Keyboards.  Recently, Holm has visited China twice giving recitals and master classes in Shaoxing, Hangzhou and Dalian.  At USA, Holm has given 51 solo recitals including sonata cycles by Mozart and Beethoven and over 250 collaborative recitals.