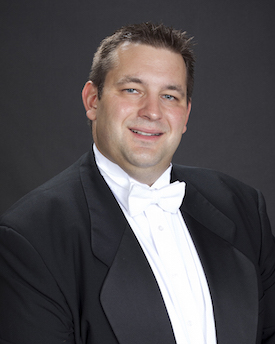 As a tubist, Petersen maintains a busy schedule of orchestral, chamber, and solo performances, as well as masterclasses across the region. He is active along the Gulf Coast and has recently performed on tuba with the Northwest Florida Symphony, as well as the Mobile Symphony in January of 2015.

Petersen received his BME in Instrumental Music (2002), MM in Wind Conducting (2005) and DM in Wind Conducting (2013) from Indiana University. He has taught in the public schools of Texas and remains an active guest conductor, clinician, and adjudicator of concert and marching bands in several states. Since 2006, he has served on the faculty of the Indiana University Summer Music Clinic teaching tuba, euphonium and brass pedagogy.